The LG Velvet is a breath of fresh air from LG with an attractive design refresh, but it’s nothing really special in other departments. For this price you even get 5G, which makes it the cheapest 5G phone in SA right now. But you also get a decent OLED display, a headphone jack and solid performance; while the option of a dual screen is the real differentiator here.

We don’t know why, but LG has gotten an unfairly hard time from reviewers and tech press in the past. It consistently puts out decent handsets at affordable prices — generally far cheaper than other flagships, but adoption of LG phones has been slow. Hopefully, the Velvet will change that.

Remember the G5, or even the V20 — both were admirable Android phones, featuring industry-shifting tech in solid handsets. I, for one, loved my LG V20 and was particularly impressed with its camera capabilities. Now, however, LG looks set to move in a different direction, dropping the ‘V’ and ‘G’ monikers for a new name, in the shape of the Velvet. We’ve been playing with the Velvet for a good week or so, and man, LG has outdone themselves.

At first glance at the phone (and most marketing materials), LG emphasises the design of this phone. And for good reason. It’s easily one of the prettiest phones to come out of the past year, with an elegant ‘raindrop’ style camera module around back.

The thing feels precision CNC’d by the gods, which means what you get is one of the slipperiest phones we’ve had the pleasure of handling. And also it’s actually glass. Luckily, though, a steel frame around the edges should help keep those corners intact if it happens to fall. Oh, and it’ll fall. It has a curved edge screen, a headphone jack, a Google Assistant button, and an overall look that’s standard for smartphones in 2020. We got our hands on the muted, but still beautiful Aurora Grey, but LG’s also offering the phone in a range of prettier colours, like Aurora Green and Illusion Sunset (oh, how we hoped to see that one in person).

The front and back glass panels are symmetrically curved, so, even though slippery, the phone feels even and well built. It’s not revolutionary in the greater scheme, but it’s a welcome design shift for LG, who has struggled in the design department before.

We’ve got a 60Hz screen on the Velvet instead of the 90Hz or 120Hz of other flagships. But it helps to remember that this is a mid-ranger and not a flagship. But the 20.5:9 1080p 6.8in panel is well-calibrated, striking and brilliant. The curved screen also looks great here, without too much distortion around the edges.

As with the LG V60, the Velvet is compatible with an optional Dual Screen case that connects via USB-C and runs off the phone’s power. It’s just an external display that connects directly to the phone, making it a dual-display phone with the ‘foldable’ gimmick without the need for bendy displays. And, you know what? It works so well. It’s definitely not for everyone, as it makes the phone far bulkier, but having the option is good enough for us. It also turns the phone into a multitasking powerhouse, making it easy to run a variety of apps on the two screens.

An outside cover display shows essential info so you don’t always have to flip it open, and you can take calls with it closed. The second display is the exact same size as the main display, so it feels and looks natural. Almost like a tiny laptop. You can run some apps over both screens, but with the hinge, it’s not pretty. We usually went with Twitter on one side while browsing multiple apps on the other or playing a YouTube video with Reddit on the other screen.

Bulk up on power

Just because it’s a midrange, doesn’t mean you don’t get the power expected in a flagship. The Velvet manages its lower price thanks to the Qualcomm Snapdragon 765G, a 5G-capable chipset that features a bit less processing power than the beefier 865 found in high-end Android phones this year. 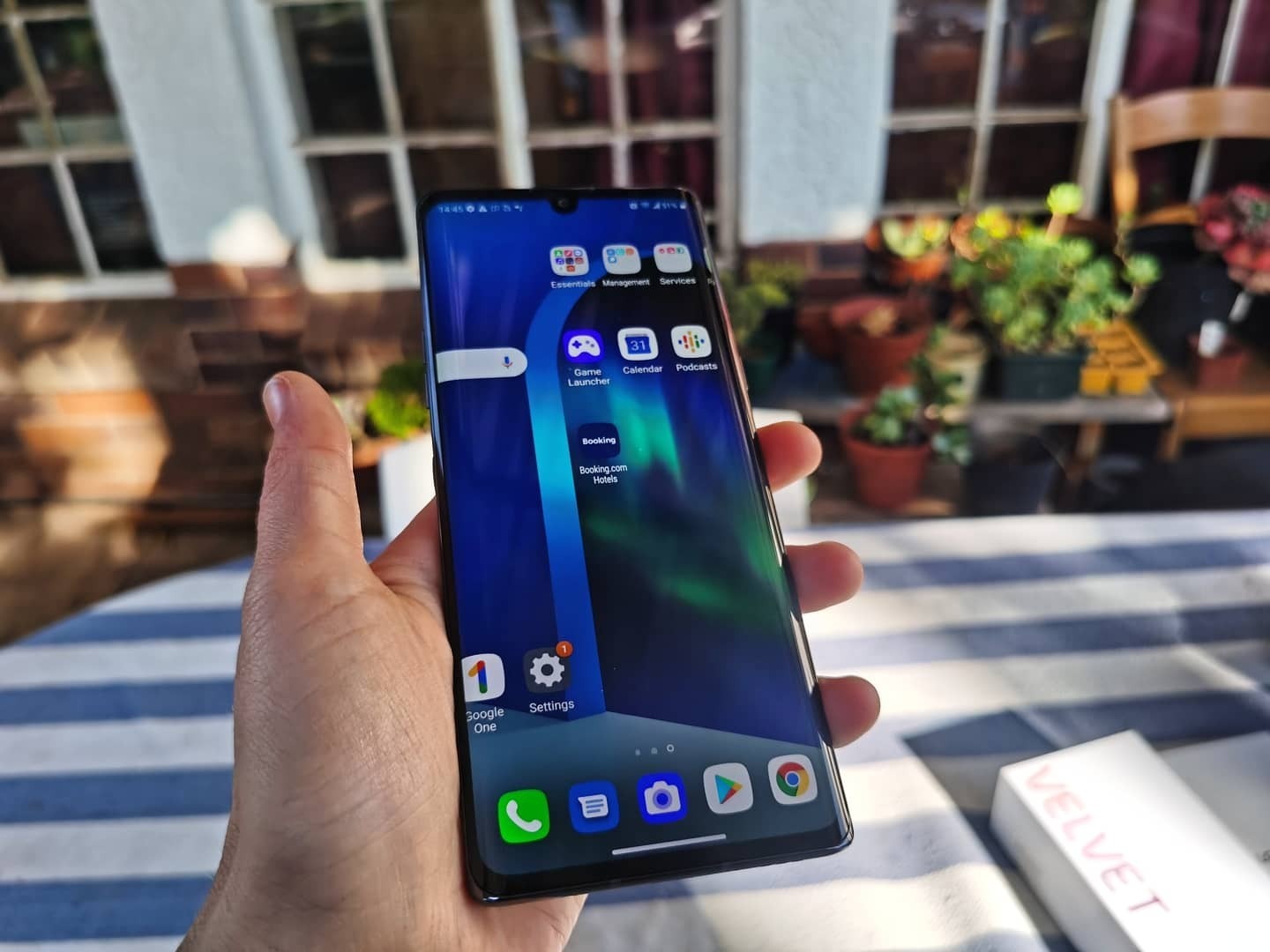 Honestly, you’d barely notice the difference. It handles daily use very well, and we were never met with any buffering or laggy apps. It packs in a healthy 128GB expandable storage and 6GB RAM that is adequate but not the most you can get, even at this price.

Then there’s the generous 4,300mAh battery that easily gets even heavy users through a day’s work and play while they buzz about LG’s attractive Android 10 skin. The reimagining of Android generally keeps out your way and is intuitive enough.

That said, the software on the Velvet is so much better than LG phones that precede it. Call quality is good through the earpiece, and video calls work well thanks to a solid dual speaker setup.

Again — LG doesn’t really disappoint when it comes to camera tech. The three lenses here lack the true-zoom periscopes of phones like the P40 Pro or S20 Ultra though, and the Velvet doesn’t even have a telephoto camera – all the zoom is done digitally. But it’s not being marketed for its zoom capabilities so that’s fine. Its main sensor is a 48MP lens with f/1.8 that takes crisp, clear shots and is used to crop for digital zoom, hence the high megapixels. 2x zoom is fine, but the 10x is very pixelated. The 8MP ultra-wide lens is great for capturing more of the shot, while the 5MP third camera is a depth sensor.

Photos are pretty oversaturated, but this is the norm for most Asia-produced smartphones. Night mode is decent and the selfie cam is great. Honestly, there’s not much to complain about when it comes to the camera.

You know what? We’re really hoping more people give LG a shot with the introduction of the Velvet. It retails for just R13,500, with the external case costing a total of R4,300. It’s available in SA, which is also a plus. LG has done us all a solid with a brilliant device in a lower price range.

The LG Velvet is a breath of fresh air from LG with an attractive design refresh, but it’s nothing really special in other departments. For this price you even get 5G, which makes it the cheapest 5G phone in SA right now. But you also get a decent OLED display, a headphone jack and solid performance; while the option of a dual screen is the real differentiator here.