Every year there's an iPhone sweet spot and, for the second year running, it's in an unexpected place. Since you don't need the iPhone Pro 13 Max to get Apple's best camera, splashing out on the enormously capable iPhone 13 Pro over either its larger or smaller siblings makes a whole lot of sense.

If you were hung up on choosing between this year’s Apple iPhone Pro and Pro Max offerings, the iPhone 13 Pro might finally manage to settle the debate for you. The gap between the two has narrowed over time and this year, it might be too close to call. Last year, choosing the Pro meant you spent loads and still didn’t get Apple’s best camera.

This year, you’ll grab the same camera spec as Apple’s Pro Max without having to pay a premium for it. If you’re more concerned with camera chops than screen size, as many are, then the iPhone 13 Pro is Apple’s most compelling phone to date. And that’s without accounting for the larger battery (compared to last year’s Pro), the ProMotion adaptive refresh rate and the fact that you don’t have to lug the 228 gram iPhone 13 Pro Max around in your pocket to use all of the tasty new features.

Is this your next iPhone? Yeah, probably.

Up to the challenge You know the iPhone 12 Pro, right? Well, if you’ve seen those, then you’ve seen the iPhone 13 Pro. There are stainless steel edges, a smooth matt finish and toughened Ceramic Glass on the front and back. But if you want folks to know that you have this year’s model, you’ll likely have to tell them.

The iPhone 13 Pro’s camera is bulkier than ever, so you’ll want to tuck it into an appropriate case — both for its protective properties and to stop it from rocking on every surface you place it on. Even without a case, the iPhone 13 Pro will hand a little heavier in your pocket. It weighs in at 204 grams, compared to last year’s 189 grams. Apple would say that’s because there’s so much extra goodness inside and, well… they’re right. Especially when it comes to the extra battery life.

The dreaded notch is still on the front of Apple’s otherwise flawless phone, but it’s been narrowed by about a centimetre. There is, alas, still a Lightning port instead of a USB-C and, in addition to its usual gold, silver and graphite shades, Apple offers the iPhone 13 Pro in a wonderful Sierra Blue. Pity they didn’t give us one.

The fruits of training 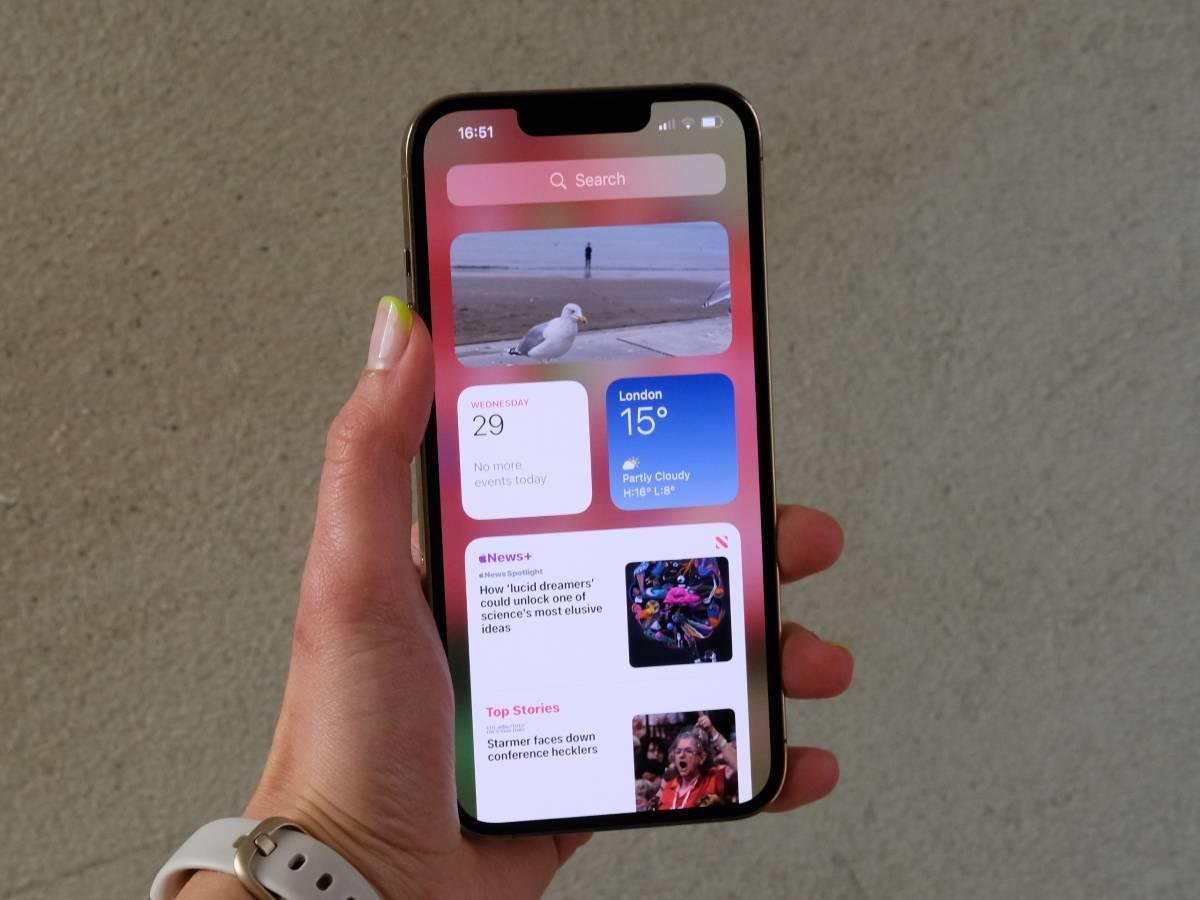 Apple may have reused last year’s 6.1in Super Retina XDR OLED display for the iPhone 13 Pro but that’s no problem at all. It’s a little brighter this time around, pushing up to 1,000 nits when outdoors. Direct sunlight is no issue, while colour and contrast make it perfect for gaming and Netflix.

The panel has a few new tricks, like a dynamic refresh rate that goes all the way up to 120Hz. Switching between apps is extremely smooth, while Apple’s handset scales down the refresh rate when all that speed isn’t required. It’s worth pointing out that Android smartphones have had this for a while, while the iPhone 13 and 13 Mini are still stuck at 60Hz. So there’s that.

If you’re the sort to use your phone’s speakers to play audio that anyone can hear, you’ll be thrilled to know that Apple’s built-in stereo speakers are top-notch. Podcasts sound great, in the event, you’re away from a Bluetooth speaker, and Apple’s spatial audio is present here as well. It’s not as tuned as it is on Apple’s speakers and headphones. Voice isolation makes calls and voice notes clear as a bell, while iOS 15 brings Wide Spectrum to the table. This is a microphone that captures background noise (on purpose)… so people believe you when you say you’re in the car and on the way to the meeting, we guess? Apple likes to keep its battery details a secret but teardowns suggest that the iPhone 13 Pro is packing a 3,095mAh cell, which is larger than that found in the 12 Pro. It still lags behind the two-day battery found in the 13 Pro Max, but that’s fine. The iPhone 12 Pro, for heavy users, wouldn’t last out a full day but 13 Pro users won’t find themselves running into the same issue. Even so, features like Cinematic Mode will ding battery life in a hurry.

On a typical work-at-home day, involving smartwatch syncing, Spotify playback, emails, instant messaging and what was totally not doomscrolling, the battery still retains a solid 70% charge — which is a huge upgrade from previous models in this line.

Apple’s A15 Bionic chip is amazing, with high-end processing skills that span the whole of the iPhone’s hardware. Its ProMotion graphics performance is apparent after a few hours of Genshin Impact, while the A15 Bionic also enables Cinematic Mode for video recording, the company’s photography software capabilities and keeps the 13 Pro ticking over at speed — even if you’re editing photos in Lightroom. Also: 5G. Moving on from the battery, Apple’s cameras are the standout feature of this year’s iPhones. And that skill is all hardware, with a little bit of software thrown in. The camera aperture is a touch wider than last year, putting Apple’s phone gear ahead of the competition. An even larger bonus is that the 13 Pro and Pro Max both have the same camera setup, so you don’t need massive hands to handle Apple’s best camera in 2021.

The pattern might be a bit familiar now — Apple’s broken its camera up into three parts. All three sensors are 12MP but there’s a main, ultra-wide and telephoto to play with. This year the ultra-wide jumps increases from f/2.4 to f/1.8, allowing for better low-light performance. The telephoto has also undergone an upgrade, snagging 3x optical zoom, while the main sensor’s f/1.5 aperture is… fantastic.

The result is some of the best nighttime performance we’ve seen to date. Instead of overdoing brightness, Apple’s managed to keep its low-light shots a little more realistically subtle. Daytime performance is phenomenal but that’s nothing new for an iPhone. But the new Macro photography skills let Apple’s cameras stand up to the best of Android’s sensors.

Apple’s software smarts have been scaled up a notch or two, and then there are Profiles, which allow you to apply a filter to the camera before you shoot an image as opposed to afterwards. No matter which option is selected, each has a slider that can be used to increase or decrease the intensity of the shot.

Video skills get an upgrade as well, with Cinematic Mode being the highlight on that front. This allows users to shoot footage and then alter the focus point, either while shooting or afterwards, when all the action’s done. It’s fun to use and, since it works with Apple’s front-facing camera too, means you can star in your own easily-altered videos. But it’s limited to 1080p and 30fps, and we struggle to see a way to use it frequently. It’s cool to play with but doesn’t go much further than that. Apple’s new sensor-based stabilisation skills are far more likely to be useful day-to-day. If there’s a version of Apple’s newest phone that’s an essential buy, it’s absolutely the iPhone 13 Pro. Combine the A15 Bionic processor with a battery that lasts at least a full day and the best camera yet seen on a smartphone and you’ve got Apple’s best smartphone (of this year). Since the iPhone 13 Pro Max packs the same camera hardware as the 13 Pro, it’s just gotten a little harder to recommend the oversized handset. Unless you’re a content creator, that is.

But the iPhone 13’s cheaper price — it starts at R17,000 compared to the 13 Pro’s R21,500 — makes this a tighter race than you’d expect. The stock 13 has the same chipset, a better battery than last year’s device, and a camera that’s no slouch. The 13 Pro’s telephoto pushes it across the finish line in the first place, helped along by that adaptive refresh rate. If you’re on a budget, of sorts, the standard iPhone 13 won’t let you down.

Sure, the innovations here are a little incremental but there are a bunch of them packed together. The end result isn’t so incremental, and we’re always glad to see a larger battery and improved camera skills from an iPhone. If you’re due for an upgrade, the iPhone 13 Pro’s the one to own.