Samsung's folding hardware has improved almost across the board, but the price - though lower than last year - remains the main reason to avoid this smartphone. Which is a pity because it's quite an experience to wield one, swapping from phone to tablet to something in between, as needed.

As with Samsung’s last folding smartphone, let’s get the worst part of the Galaxy Z Fold 3 out of the way right up front — at R38,000, it’s still far too expensive for most users. That said, two things have happened since 2020. Many things have happened since 2020 but only two of them matter in this context: Samsung’s folding hardware has become R12,000 cheaper and the overall experience has also improved.

That doesn’t mean that it has become an essential buy — that day will come, but it’s not today. But if you’ve got a) the budget and b) the inclination to own the best folding smartphone in South Africa to date, it’s very easy to recommend. But it’s mostly just that first requirement — the huge price investment — holding this one back. The Galaxy Z Fold 3 (we reckon the 5G should be implied, at this point) is Samsung’s most attractive folding package to date. It’s a slimmer take on the previous version, measuring just 6.4mm thick when unfolded — and it looks like it is in its natural state when it’s open so you can see that 7.6in 1,768 x 2,208 foldable AMOLED screen. The Fold 3 is as sturdy as you might like in this orientation, handling like the world’s most convenient tablet.

Fold it over and you’ve got what looks to be a slimmer take on Samsung’s current Galaxy S lineup — that’s the Gorilla Glass Victus-covered 6.2in 832 x 2,268 (see what a strange resolution Samsung’s used?) dynamic AMOLED in action. In this orientation, all of the physical buttons are on the bottom right-hand edge — so that the fingerprint reader and volume controls are always in the same place.

Or you can set it up like the world’s smallest laptop*, with the bottom edge resting on a desk (cos this trick doesn’t really work on your lap) and your fingers tapping away at an email while your snooty coffee cools and you get strange looks from the other folks banging away at MacBooks while trying to look important/artistic. Amazingly, the Fold 3 is quite usable in this configuration — unless you’ve got boerewors for fingers, in which case you’re better off using the swipe function to type.

*There are probably smaller laptops, consider this poetic license.

Everything hinges on it Samsung has spent ages working on the hinge for the Galaxy Z Fold 3 — well, on the hinges for its folding gear in general. The result is a rock-solid bit of hardware, the inner workings of which you’re only going to see if something catastrophic happens, like it being run over by a bakkie. The folding edge is just a sturdy piece of Samsung-branded metal that kinda curves on the edges. On the front, there’s the little widget keeping the foldable screen in place and a crease that you’ll quickly get used to.

Actually folding it takes some effort — it’s at its strongest when completely folding or completely open, but it won’t crumble if you have it half-open (see the mini-laptop comparison above). When folded, there’s a little triangular gap that probably won’t cause any mischief — unless you frequently jam the Fold 3 into a pocket filled with toothpicks. Don’t do that.

How the other half lives 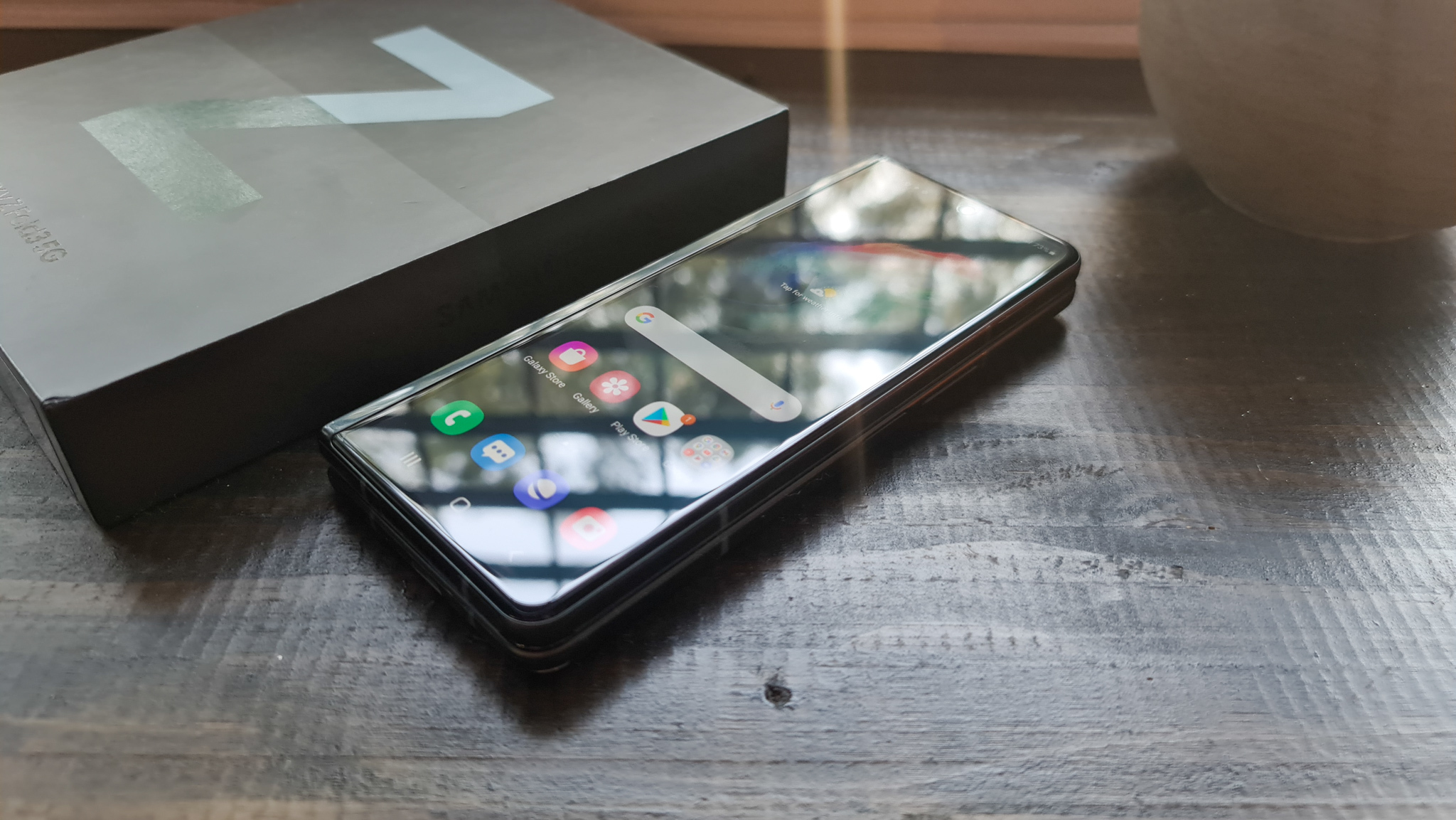 For Samsung fans, the Fold 3 represents a chance to experience something a little unusual — a handset with a Snapdragon inside it. The Americans are used to this — all Samsung flagships include a Snapdragon headliner but here in SA we’re used to Exynos hardware. Well, not here. The Snapdragon 888 lives inside this device, powering the dual 120Hz dynamic AMOLED displays with the backing of 12GB of RAM. Is it fast? Yes, it is. Will you notice the difference when stacked against Exynos-powered S21 handsets? Probably not without the assistance of a benchmarking app.

South Africa’s only getting the 256GB storage version of the Fold 3, so if you’re after a little more space you’ll either have to change your smartphone or resort to importing the 512GB version. There’s no microSD expansion on offer here.

Nor is there a bigger battery. Samsung’s stuffed in a 4,400mAh battery, which is smaller than you’ll find in the Galaxy S21 Plus even though there’s a whole lot more screen that needs powering here. It’ll manage a day on a charge, but you’re not going to squeeze much more than that out of it. You’ll only rarely have spare capacity left over for the next day. 25W fast-charging is decent but it could be quicker — but we’d say that about any of Samsung’s handsets at this point, since the majors all have the same charge speed.

The other noteworthy aspect? Samsung’s fitted its Fold 3 with an IPX8 rating — meaning it’ll somehow survive a dunking in up to 1.5 metres of water for up to 30 minutes. The company’s very specific about the handset not being beach-compatible, though. It might survive a swimming pool at a pinch but it’s not dust-proof and sea sand (or any sand) will wreak havoc on your handset. We can’t even begin to imagine the grating inside the hinge mechanism… What you’re not buying the Galaxy Z Fold 3 for is its camera complement. That’s not to say the cameras are crap — there are five in total, a triple-sensor array on the back, a 10MP front-facer inside the slim folded screen and then a 4MP under-display selfie camera below that flexible panel as well, and they’re all perfectly adequate. Okay, maybe not the 4MP sensor so much, but if you’re after camera chops you could save yourself R10k and get vastly better performance from the Galaxy S21 Ultra.

The three rear sensors are all 12MP efforts, a wide, telephone and ultrawide sensor that all combine to… take photographs. They’re decent enough but aren’t what you’re paying R38,000 for. You can get better camera performance from Samsung’s Galaxy Note 20, and you’ll only have to pay R17,000 for it. The cameras are here because they have to be, not because Samsung’s trying to impress you, but you’ll still get great snaps in good light and decent images in lower light. The company hasn’t skimped, but they haven’t gone all-out either.

The selfie cams are also solid efforts. The 10MP sensor takes better images, so if you’re posting to social media then that’s the one you want to use. If you’re making video calls, though, the 4MP under-display is just fine. Especially since you can set the phone down and angle it like a laptop webcam, so you don’t have tired forearms after a lengthy video chat. Samsung’s latest folding smartphone really is a piece of work. It’s the company’s best effort so far, even if it’s not as accessible price-wise as the Galaxy Z Flip 3. That’s the major thing that has to change here. Samsung hardware is amazing but it’s hard to justify buying one of these when you could pick up two M1 Apple MacBook Airs and still have change left over for the price of one Fold 3. It’s a hell of an experience to use one but it’s only going to be a contender when it’s priced more or less on par with Samsung’s Galaxy S range of devices.