2020 has been tough. We don't need to remind you of that, and as fantastic as the Xbox Series X and PlayStation 5 might be, the fact Microsoft has released game-changing hardware at R7,000 will be a godsend for anyone on a smaller budget. You’ll still get to marvel at next-gen loading speeds and graphics. So it’s a win-win. No question.

This generation of consoles brought some interesting challenges. One of the major ones being how to make hardware that’s actually fairly expensive more accessible. And with accessible, we obviously mean affordable — because not everyone has R12k for a next-gen console, no matter the logo. That’s exactly what Microsoft set out to do with the smaller, lower-cost Xbox Series S this year. It’s not the flagship Series X, and doesn’t even resemble the bigger sibling. But it features some stellar components under the hood and comes in at a far more affordable price.

Despite its less impressive stature and more conservative tech specs, the Series S is the humble piece of tech that still makes great leaps in terms of next-gen implementation. It’s not an Xbox One, that’s for sure — and it holds up as a meaningful addition in the Xbox lineup this year.

If you’re keen on next-gen, but would like to stay in a budget, the Xbox Series S / Game Pass combo is exactly what you need. For all of the goodies squeezed into Xbox Game Pass (oh, and it’s great value), we can overlook the lack of any impactful launch titles on the new consoles this year. If you’re an Xbox Game Pass subscriber, you’ll get immediate access to the same titles you’ve been playing on your Xbox One. That means once the Series S is connected up to power and a display, you can chow down on over 100 titles, including major Xbox Games Studios franchises like Gears of War, Halo, and Sea of Thieves.

Microsoft is also rolling out a new initiative called Smart Delivery that lets you by some titles only once. Let’s say, for instance, you purchased Assassin’s Creed Valhalla for your Xbox One and then upgraded to a Series S/X later on, you’d gain instant access to the title on your next-gen box for no additional bucks.

Some older Xbox titles are being issued with ‘Optimised for Xbox Series S|X’ updates. These updates will help reduce load times, bump frame rates, and usher in graphical improvements. We’ve spent hours with the Optimised version of Gears 5, and the difference is undeniably impressive.

It’s no Series S, but we’re ready to argue that the little S oozes slightly more ‘console’ energy than the big sibling. 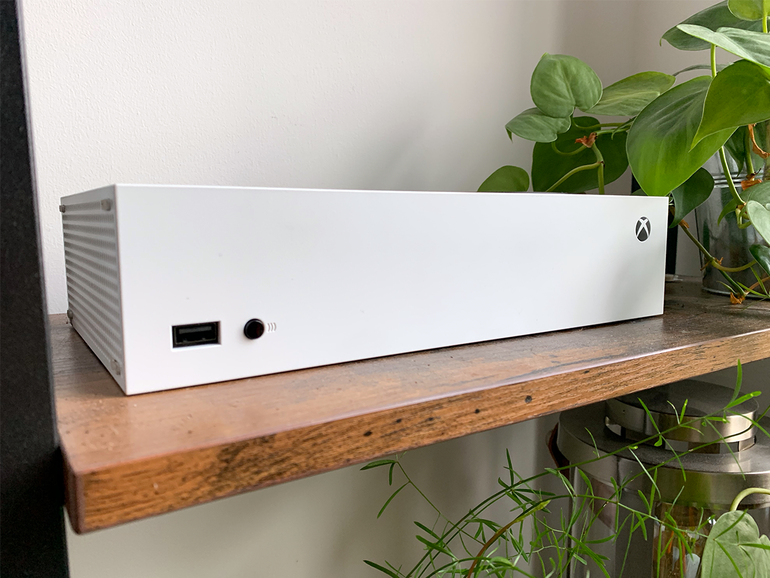 Here you get that robot white finish, the weirdly captivating air vent, and the minimalist shell that defies logic and somehow manages to make the humble cuboid sexy. It’s also one of the lightest full-spec consoles we’ve laid our hands on. Remember when they said that tech is getting smaller and smaller? This is the only testament to that statement across all launch consoles this year. The Series S is arguably the most portable of the bunch and is small enough to sit snuggle next to your display. Easy.

It’s fitted with a lot of useful connectivity options in the form of three USB 3.1 ports, one HDMI 2.1 port, and an Ethernet port.

You’ll see the differences immediately in terms of performance. There’s no question whether this little machine is next-gen or not. It very clearly is. It’s got the same Custom NVME SSD as the X, in combination with the all-new Xbox Velocity Architecture to get things done in quick-quick.

Here you get faster loading times, steadier frame rates, and impressive quality of life features like Quick Resume, which suspends game state data on the internal SSD to let users hop between multiple titles in a snap — similar to how you might leaf through apps on a smartphone. Just like its monolithic sibling, the Series S also supports DirectX raytracing, variable-rate shading, spatial audio, and frame rates of up to 120fps, so you won’t be missing out if you opt for the miniature console. Quick Resume, in particular, is an absolute revelation. The feature dropped us in the middle of a Gears 5 set piece within 10 seconds of booting up the console, letting us mow down locust (or whatever they’re called these days) before we’d even parked ourselves on the couch. By comparison, it took the launch Xbox One around 30 to 40 seconds to complete similar tasks.

Those nimble innards, which are powered by a custom-designed processor leveraging AMD’s latest Zen 2 and RDNA 2 architectures, also turned loading screens into blink-and-you’ll-miss-them affairs. We spent a fair bit of time with a range of triple-A titles including Doom Eternal, Forza 7, and Watch Dogs Legion, and we can’t recall ever doom-scrolling Twitter in a bid to pass the time.

Speaking of trade-offs, it’s also worth noting that the Series S packs a modest 512GB SSD (though only 364GB is actually usable) compared to the 1TB SSD found in the Series X. That’s… small. So you’ll need to micromanage that library to death. 2020 has been tough. We don’t need to remind you of that, and as fantastic as the Xbox Series X and PlayStation 5 might be, the fact Microsoft has released game-changing hardware at R7,000 will be a godsend for anyone on a smaller budget. You’ll still get to marvel at next-gen loading speeds and graphics. So it’s a win-win. No question.