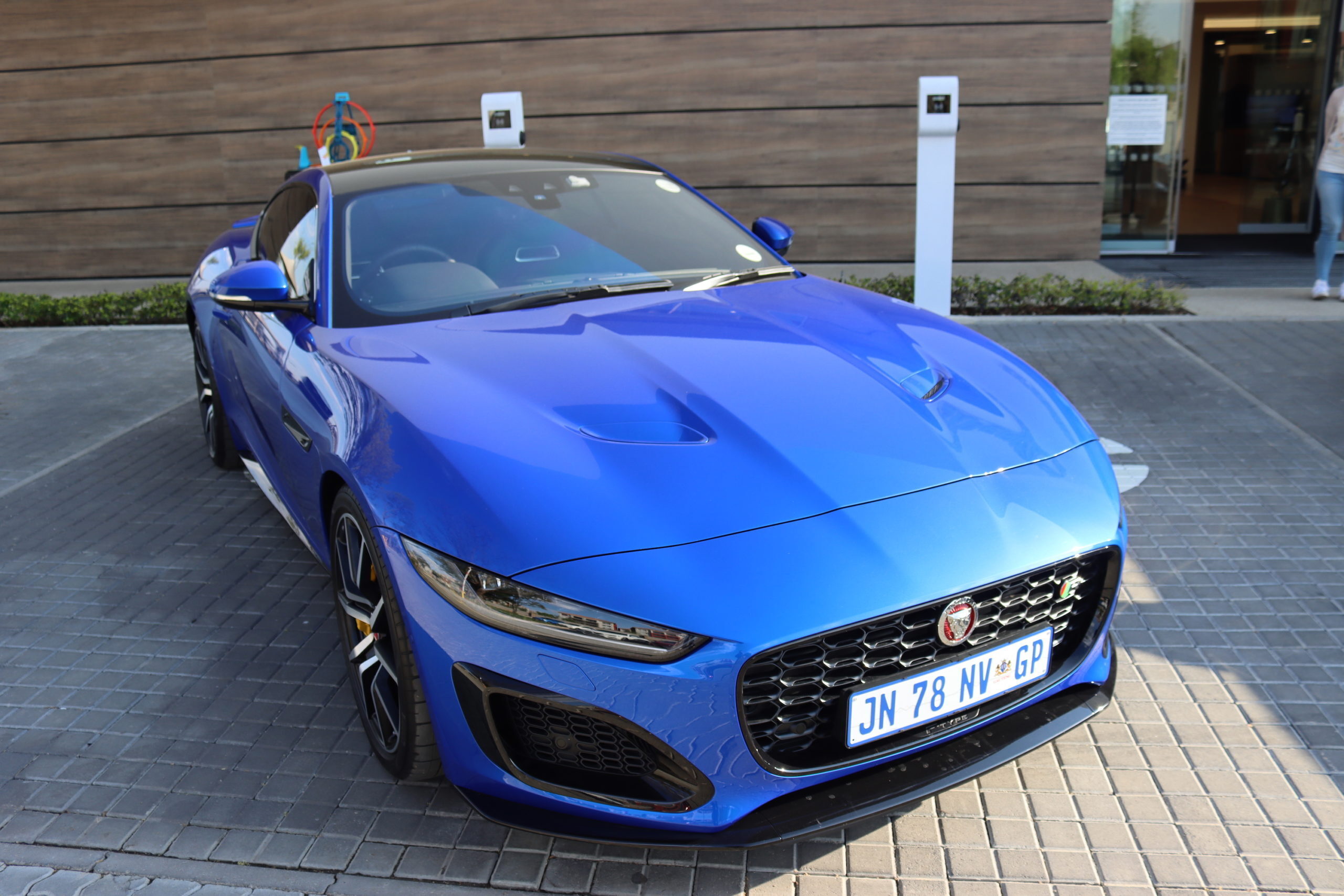 Every so often something happens that reminds us just how awesome this job is. We’re always aware that Stuff is an awesome place to make a living but every now and again it’s driven home. Hard. We’re talking about our hands-on (and feet-on, we guess?) time with a couple of Jaguar’s new F-Types at an event at the Jaguar Land Rover Experience in Johannesburg. Long story short, you want to spend at least a little time behind the wheel of one of these. The event was an in-person thing, which is rare of late. But the folks at Jaguar Land Rover took everything seriously, we were happy to see. There were three vehicles available — two Jaguar F-Type R P575 models and a Jaguar P380 convertible, with three teams of drivers swapping between them. Before each switch, and any time anyone got out of the driver’s seat, Jag sent someone in to sanitise the vehicle. This took the form of wipedowns with cloth and sanitiser and then a larger machine for a deeper clean before sections were swapped over. Social distancing and masks were in full effect as well.

Safety was also a concern on the track, with all of the exercises aimed at folks who may not have much extreme driving experience. Stuff got to take the Jaguar F-Type P380 V6 convertible sideways on Jag’s skidpan, the first time it was allowed for so-called ‘regular’ people we’re told. There was also a session at the Dynamic Experience area with the F-Type R P575 V8 — all facilitated by Jaguar’s instructors. Lastly, we got to spend a little time on Johannesburg roads with the P575. While a little less exciting, it had one thing in common with the track experiences: it didn’t last long enough. We went wheels-down in the wet with the F-Type P380 convertible, which packs a 280kW 3.0-litre V6 engine capable of hitting 275km/h. We didn’t get it anywhere close to that total, however. Instead, it was slipped into Sport mode and we took it sideways on the skidpad, attempting to drift the rear tyres around a series of cones. We’re not going to go on about our performance much (because it was abysmal) but sending the P380 into a (mostly) controlled 360° spin isn’t nearly as terrifying as you might think. Just… don’t try it at home, yeah?

It was a fine look at the power the F-Type develops right off the bat. Crank the steering wheel over and press the accelerator and the rear-wheel-drive just throws the end out. Which is fun, if you’re on a track made for it. Less so in the Woolies parking lot, so maybe save Sport mode for when you’re in a position to be uncivilised. 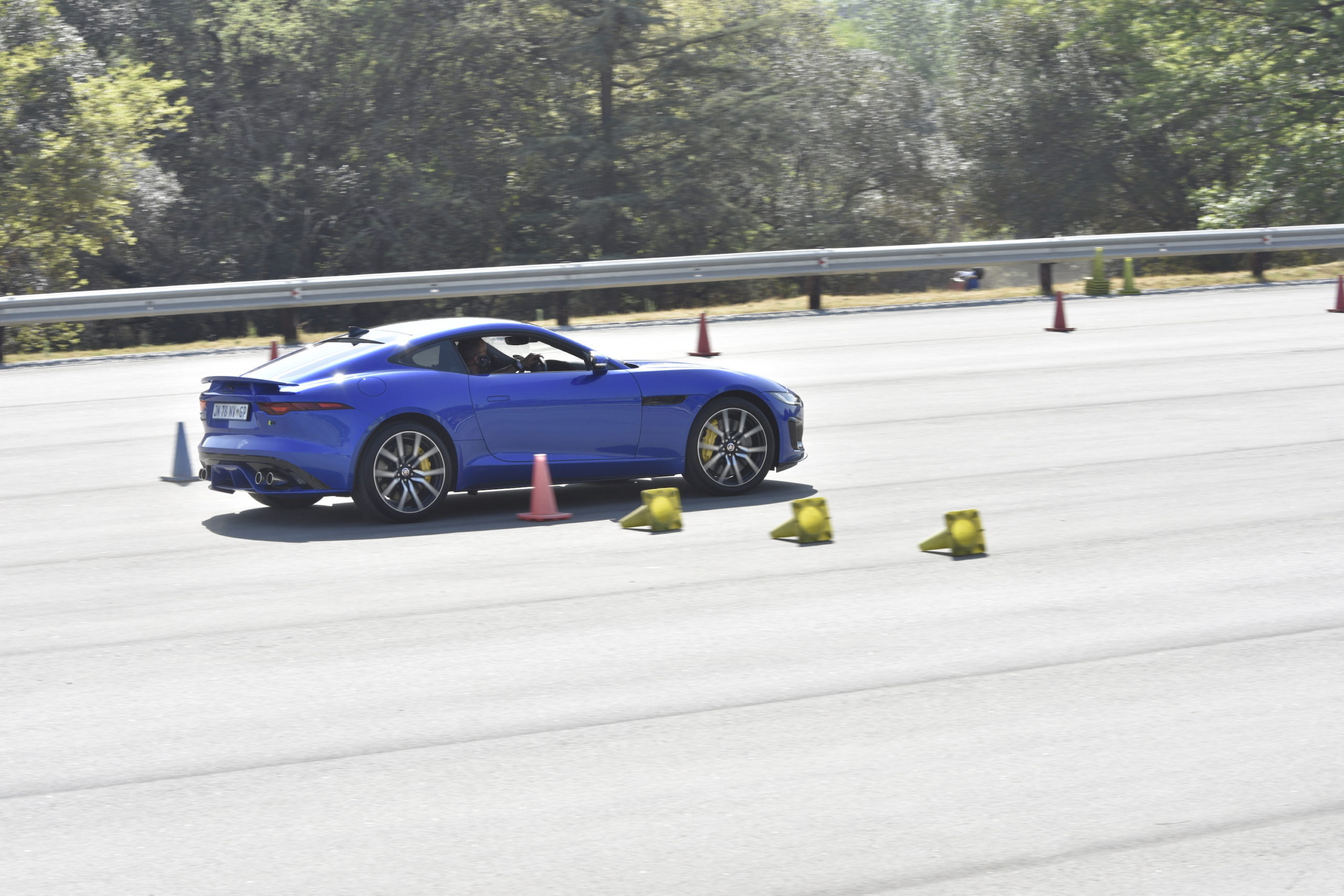 From there it was off to the Dynamic Experience area, where other, less-slippery driving skills are taught. We were set up for a slalom course, as well as a brief sprint and braking section, with the F-Type R P575 5.0 supercharged V8 at our disposal. This one outputs a rather meaty 423kW, managing a top speed of 300km/h and 0-100km/h in just 3.7 seconds. The slalom was easy enough — weave a speeding V8 through a series of cones, and then reverse back the way we came, as quickly as possible. It’s here we got some idea of the vehicle’s stability, while the reverse camera was exceedingly useful in keeping us between the cones. So much so that we eschewed the mirrors or looking outside for much of the trial. In reverse, that is. The P575 takes off too fast for you to not pay attention to ‘forward’.

Then there was the adrenaline-spiking acceleration and brake, with the object being to stop between a set of cones as quickly and as neatly as possible. Here the V8 roared forward like a beast but it had to be put back into its cage just as speedily, or else we ran the risk of wiping out several cones and (possibly) a R2-million car. Jag’s signature aggressive howl was in full evidence here, at least until the massive disks did their job of bringing the monster to a halt. Fun? Absolutely.

Slowing it down a bit Next came the road-test. About the same sort of experience as your average test drive is what we experienced, but with the added difficulty of handling a V8 Jaguar next to regular traffic. Go a little too enthusiastically on the accelerator at the lights and it blips forward past everything else before you know it. It’s also a little frustrating keeping to the speed limit on regular roads, when you know that it could be doing 300km/h before you know it.

And yet, it’s not that hard to drive the P575 like a civilised human being. It does its best to make sure you don’t have to work to keep it under control, but it’s also reassuring to know that you’re never more than a foot-tap away from outrunning everything around you.

The interiors, of all the Jaguar models we got to play with, felt comfortable. Loads of features, on the steering wheel and the centre console, are available for use. Want to turn off an assist, flick over to Sport Mode and go scare some traffic? That’s an option (the one we weren’t allowed to take) and it’s possible in moments. The deep cockpit gives the impression of security, which is handy when there’s that much power under the hood.

Price is definitely an object If you want to get in on this heart-thumping action, you’re going to need some serious bank. The new F-Type starts out at R1.24 million and change for the F-Type R-Dynamic P300 (which we didn’t get a chance to experience), rising to a little under R2.43 million for that monster V8 F-Type R P575 AWD.

Is that too much for a car? Maybe, but you’re only thinking that way because you a) don’t have the money or b) haven’t given the car(s) a shot. Having given this pair a shot, it’s easy to see why Jaguar has its ferocious adherents. Even if you never considered dropping two million on a car before, one test-drive should be enough to make the sum seem almost reasonable.