By MarcéFebruary 2, 2021No Comments7 Mins Read LG may be exiting the smartphone market soon, but with TVs like the OLED55CX, it really doesn’t need to sell smartphones. Really. It’s become synonymous with some of the best panels in the biz, and for good reason. 2019’s C9 range was one of our favourite entries, and LG brings similar tech to its CX panels.

Where it does change up its methods slightly, is the addition of a 48in OLED variant in the CX line — it’s nice to have a smaller option, as the 55in is an intimidating beast in its own right. In addition to our review model size, LG also offers a 65in and a whopping 77in option.

We put the OLED55CX through rigorous testing (ie lockdown-induced bingeing), and found that this is one of the most enjoyable pieces of tech in the new normal society. Couple it with a next-gen console (in our case, the PlayStation 5) and you’ve got a powerhouse setup.

Don’t be fooled by the slim profile of the CX — it may be but a few millimetres thick from the side, but it can put out a viewing depth of 47mm thanks to its undeniably cool OLED tech. 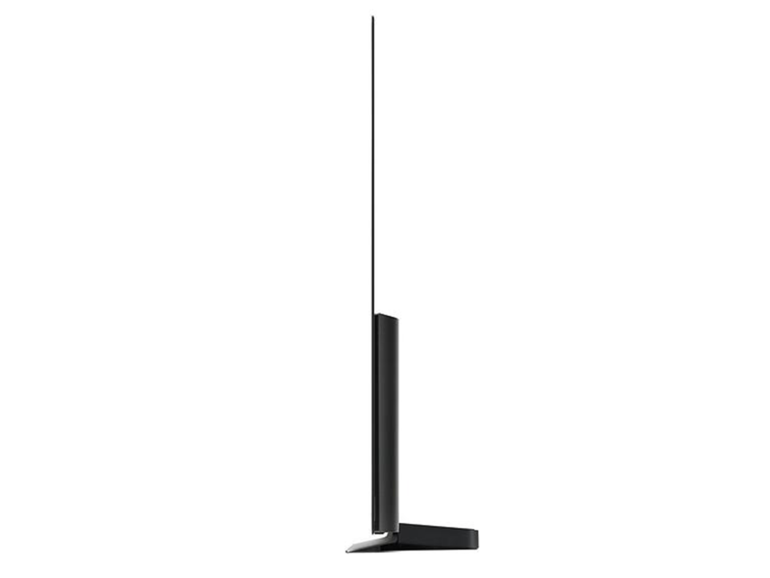 The skinny profile does translate well in a room, allowing for more space on the TV stand, if it’s not mounted. LG’s secret to its small size is the lower part of the chassis — that’s where all the fancy tech lives. It functions like an onboard soundbar, housing the hardware, ports, speakers and all the parts that make it run.

Of course, the chunky stand does take away from the minimalism aesthetic LG’s going for here. It’s fairly wide, and the panel is mounted low on the base, making the addition of an external soundbar in front of the display a slight problem. We paired it with the Sonos Beam, and found it a struggle to switch the TV on and off using the controller.

This also means that the panel is very sturdy. It doesn’t wobble and will outlive bumps against the TV stand — so even though it’s not one of the sleekest design choices, we get it.

Everything about the CX oozes quality, and it’s clear this is LG’s flagship range. The design looks as premium as you’re gonna get on a wall in Incredible Connection, and everything slides/fits together flawlessly. It’s just a joy to display this piece of tech in a home.

After the launch of 2020’s updated game consoles from both Microsoft and Sony, we’re sure TV manufacturers have seen sales of 4K OLED displays skyrocket. Bonus points if the screen features at least a 120Hz refresh rate. Just so happens that the CX checks all of those boxes. It’s a 4K UHD TV with a resolution of 3840 x 2160, and it’s able to handle HLG, HDR10 and Dolby Vision dynamic metadata HDR standards. Honestly, there isn’t much more a gamer (or run-of-the-mill Netflix watcher) could want. Except maybe HDR 10+, but the only brands that have brought this feature to the masses is Panasonic and Philips, both of which aren’t natively available in SA.

Bolstering its position, however, is the vast amount of connection options available on the CX. Peek around the back, and you’re greeted by four HDMI inputs, all of them with 4K featuring 120Hz output in 10-bit HDR. That bit of info should make anyone who’s awaiting their new consoles call up the courier right about now. Pair that with LG’s support for HGiG HDR tone-mapping, ALLM, VRR and FreeSyncand you’ve got a winning combo if there ever was one.

One of the HDMI features called eARC is particularly useful if you’re planning a setup sprinkled with some Sonos kit or any Dolby Atmos-enabled soundbar.

All in the input

Considering all of the smart TV options available to South Africans, LG’s webOS is arguably one of the best interfaces around. Lucky for us, LG hasn’t fiddled with its functionality much. If it works, it works. Navigating apps, features and playback is seamless and easy to get used to. Thanks to the point-and-click Bluetooth remote control, you can easily access a variety of available apps and direct your attention to what matters most — glueing your eyes to its beautiful picture. Its extensive app library includes all the greats — Netflix, Showmax, Amazon Prime Video, DStv’s app and even Plex.

Its system is also integrated with Google Assistant voice control (even though the TV doesn’t natively run Android TV). A quick press of the ‘mic’ button on the remote control should have the OLED55CX doing your bidding in no time. The display itself is even fitted with far-field mics that are able to pick up voice commands.

Zipping through apps is particularly responsive. We recently reviewed LG’s NanoCell 55in, and its processing power was considerably less than this model, bringing long waiting times along with it. The OLED55CX, however, is extremely responsive, and we never experienced any input lag using the Magic remote.

Fall into the void

In TV tech, it’s the small details that matter most. The CX range introduces improved black-tone detail, contrast, motion handling and colour fidelity. And it honestly provides an enjoyable watching experience, whatever you may be watching. What you’re really gonna want to watch on this panel, is anything that is set in space. We dove right in and watched Avengers: Endgame in all its glory on the CX, and the colour reproduction is beautiful. Especially if you pair it with the deep OLED blacks that really bring the deep void of space into perspective. It really performs when displaying anything in 4K, really.

Thing is, any 4K OLED-capable panel will be able to deliver deep, saturated picture, but LG manages to serve up clean, bright and equally detailed white tones, which is a nice addition. This means that contrasts have real dynamism. Thanks to the high refresh rate, motion is handled seamlessly too.

Basically, expect impressive picture reproduction in a natural, yet punchy manner. It demands your attention with just about anything you can throw at it.

Moving on to ‘Game’ mode, it’s clear LG’s really out to win over gamers’ hearts. The model retains all of its vibrancy while demonstrating lag-time of 13ms, which isn’t brilliant by itself, but boot a 4K-ready RPG like Horizon Zero Dawn or Spider-Man: Miles Morales and you’ll experience immersion, unlike any 1080p gaming monitor can.

Following this 1,000-odd-word review, we can confirm that we had a helluva time reviewing the LG OLED55CW TV. It arrived just in time for us to attach to a PlayStation 5, and pretty much any 4K-capable sci-fi feature film from recent years will look astonishingly cool.

You’ve come this far, so you deserve the price now. The OLED55CX is, surprisingly, more affordable than the C9 model it kinda replaces, coming in at just R25,000 for the 55in variant that we reviewed. That’s… not bad for a full-house of tech and features.