2020 hit hard, but the Note 20 is trying to hit harder. It’s clear that smartphone makers are showing no signs of slowing down. Lost your job due to COVID? At least there’s a non-stop supply of smartphones heading your way.

Samsung recently revealed the Note 20 range of devices, of which there are essentially two: the base model and the Ultra. We already spent some time with the Ultra 5G that costs an eye-watering R33,000. Now we had some time to compare the Ultra with its smaller, more conveniently priced sibling.

As always, the Note series is pushing multi-tasking and multi-use cases, especially with the S-Pen and that beautiful display. Unsurprisingly, the Note 20 feels like an upgrade from the Note 10, with a flat display replacing the curved show-off display you got standard on the Note 10. The Ultra, however, retains the curved display.

Both come with a more responsive S-Pen but the Ultra is where Samsung flexes some real muscle with its best and fastest display yet. It’s a massively powerful gaming device, with both featuring Xbox GamePass ultimate through Samsung’s partnership with Microsoft. The Note 20 has a 4,300mAh battery and the Note 20 Ultra gets a 4,500mAh battery. 25-watts super-fast charging comes to both devices and 15watts power share will allow you to share power between devices. Those are some beefy devices right there.

But irrespectively, you get two mighty powerful devices, each with pros and cons. But which is worth the upgrade while giving you more bang for your hard-earned bucks?

If anything, these devices are something to behold. They’re some of the best-looking devices we’ve had our grubby hand on. I went into more detail about this in the full Ultra review. But honestly — if you’re looking for a handset that conveys your style, fashion, or personality. The Note’s got you covered with its beautiful range of colours.

The base Note 20 comes in the brilliant green colour, that’s arguably better-looking than the rose gold colour it debuted this year. But that’s just the back. Up front you get a view of the 6.9in curved edges and Gorilla Glass 7, a Dynamic AMOLED 2X display on the Ultra. But you know what? We really prefer the non-curved 6.7in display with an FHD+ display and Gorilla Glass 5. Some say it looks and feels less premium, but we tend to disagree. It looks more sturdy, and that border just makes the display pop.

Weirdly, you’ll find the S-Pen on both models on the other side this time. If you haven’t been paying attention — it’s on the left side now. We’re guessing to make space for that ginormous camera sensor (108MP, mind you).

The finish on the phones looks slightly frosted and this makes it way less of a fingerprint magnet than its predecessor. This gets Stuff’s grubby-fingered thumbs up.

When you start learning Japanese, this is the first phrase you learn, and it literally translates to: This is a pen. That’s the case with the Note. The S-Pen really differentiates it from other flagships on the market. Samsung’s the only smartphone maker to really offer an interesting accessory bundled with a phone. And it’s just so useful. 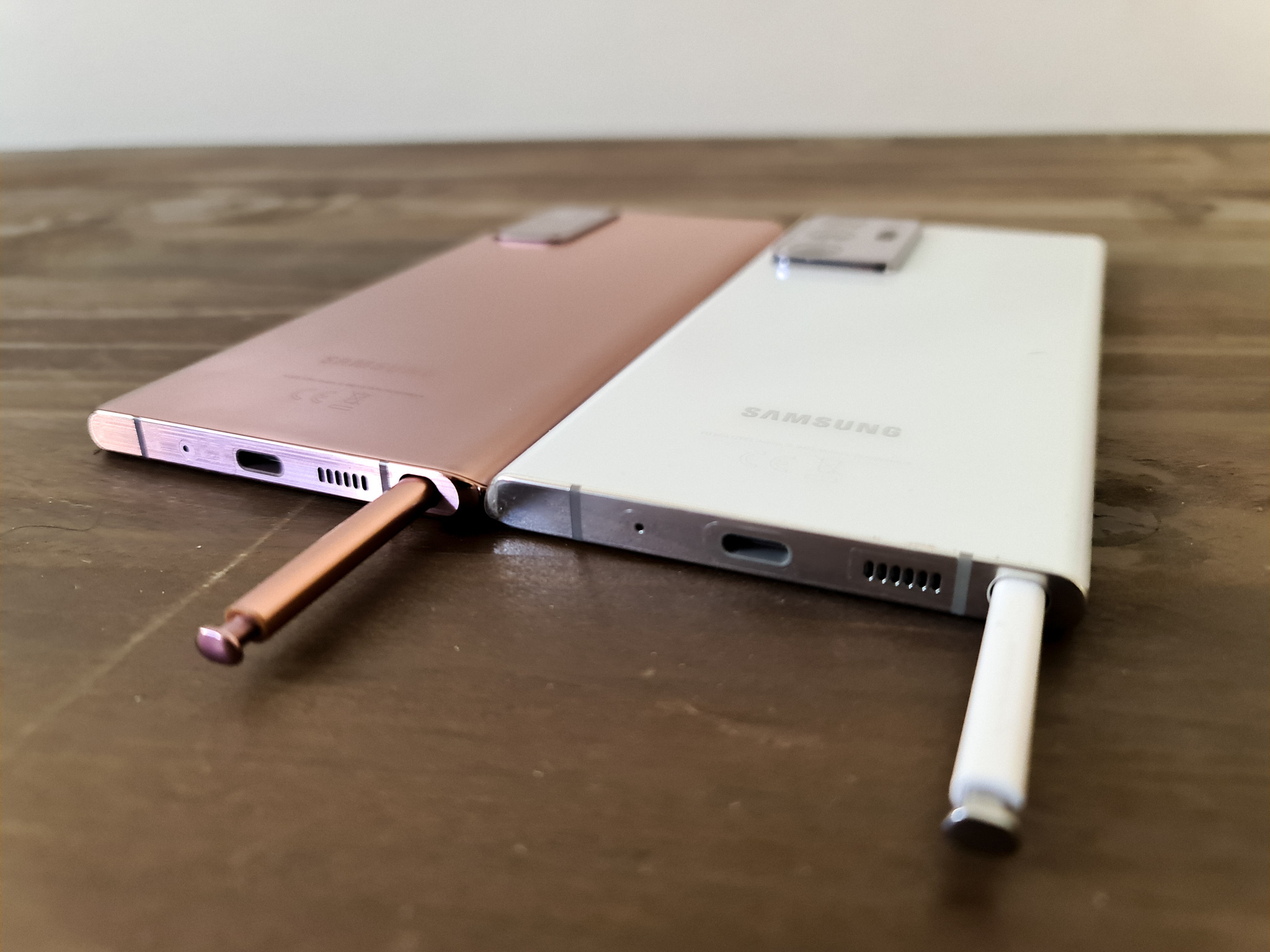 This time, you get some nice improvements — especially when it comes down to latency on both devices from respective predecessors. It’s 40% better on the Note 20 and 80% on the Note 20 Ultra. Also, you can now save handwritten notes or doodles as PDF format, which is a cool bonus if you plan on dropping it into a presentation, for example.

You’ve also still got Air Actions that allows you to wave your pen around like a wizard, except you’re navigating through files on your phone, rather than summoning spirits. Another bomb feature is ‘Screen Write’ that gives you the ability to instantly take a screengrab and scribble all over it. Our favourite S-Pen feature, however, is the fact that you can now add audio recordings into your notes and bundle them together. Hell hath no fury like an editor who found out you misspelt a Samsung CEO’s name or got a spec wrong. That’s what technology is for, I guess?

Air Gestures will, again (we had the same feature on the previous Note) allow you to take pictures or control camera settings from afar — a very useful feature if you’re keen on photography and filming stuff in your back garden.

At the heart of both Notes is a powerful Exynos 990 processor (in our neck of the woods at least). We’ve seen people moan online, saying that the Exynos doesn’t compare with the Qualcomm (that you get in the West). But really, the difference is minimal to none in everyday use. Even more, you haven’t enjoyed mindless Instagram scrolling if you haven’t seen it in 120Hz. What a breeze. The Ultra’s 120Hz refresh rate brings some insane comfort in doing mundane tasks that you would’ve never expected. The Note 20, on the other hand, has a refresh rate of half that, and it shows especially in gaming.

The adaptive refresh rate will also scale up or down depending on the task, going as low as 1Hz for things like reading and ramping all the way to 120 for gaming.

With super-fast 5G on the Ultra and WiFi 6 on both models, Samsung claims it’s the best gaming experience on any Samsung smartphone too. So that’s a thing. But honestly, you won’t find this much raw power in a smartphone until the next batch smartphones start rolling out.

Dex is back, to seamlessly switch between screen and finally wireless connection is available, so that means you can continue watching that YouTube video on your smart TV. Or text a mate while gaming. We really appreciate the way Samsung tries to make Dex as accessible as it can with every iteration.

Storage-wise, the Note 20 Ultra comes with either 256 or 215 GB with the option to expand up to over a terabyte with a MicroSD. The Note 20 ships with 256GB storage and 8GB RAM.

The Note 20 has a 64MP telephoto main camera with a 12MP wide-angle camera and finally, a 12MP ultra-wide angle one for capturing more. The Note 20 Ultra has a whopping 108MP wide-angle camera, a 12 MP telephoto and ultra-wide camera, plus extra laser-focus technology.

The headline feature on both models is the pro video mode allowing you to capture 8K at 24fps recording with a 21:9 aspect ratio. Easily control exposure, focus and there’s even the option to control the speed of the zoom. You’ll also be able to shoot 120fps at 1080p, which should do the trick for most users.

Pair that with multi-sourced mic control and you’ve got a mini-cinema kit on your at all times. Both the Note 20 and 20 Ultra can capture sounds from the rear, the front, both, or an external mic or headphones.

Both phones have a 10MP front-facing camera to get a good shot of your mush and from our brief time experimenting with that, it’s more than adequate and super handy for video calls. Okay, so there’s a lot to take in here, but honestly — these are two monster devices that’ll make just about any user happy. If you’re a hardcore gamer? Check. If you work hard? Check. If you’re into professional photography? Check. If you just want a pretty phone? Check. The real question is, which one can you afford?

That’s pretty much our only big gripe with the new Samsung Note range — we wish they could come in at a lower price point, to make them more accessible for the general South African market. But that’s not gonna happen with these specs. The Note 20 comes in either 4G (21,000) or 5G (R24,000) variants and the Note 20 Ultra is 5G (R33,000) — all of them are available to buy right now on the Samsung online store in SA.