Here’s what DJI’s next smartphone gimbal may look like Gimbal tech has been one of the big consumer innovations in recent years. And heading it up is gimbal veterans DJI, who has made handheld gimbals widely available. Its Osmo range of smartphone gimbals are some of our favourite gadgets ever, and it now looks like it is readying to launch the next in the Osmo line codenamed the OM 4.

According to a new report from WinFuture, DJI’s Osmo Mobile 4 could attach directly to the back of a smartphone, negating the need for a bulky smartphone-clip. In a video short posted to Twitter, you can see how the two new magnetic mounting mechanisms will work. These will allow the DJI Osmo 4 gimbal to attach to any phone, no matter the size.

Thing is, we don’t know how legit the leak is, but it looks like a proper video promo commissioned by DJI. So it’s likely that DJI is gearing up to announce this device. 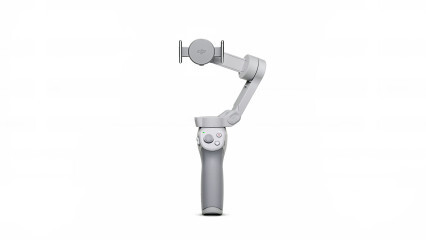 The Osmo 4 looks like it could heavily improve on the previous Osmo gimbals, where the main complaint was how the claw mount was finicky with some larger (or smaller) smartphones. Now, it looks like you’ll be able to pre-attach a magnetic disk or claw to the back of your phone, allowing you to quickly snap the handset into the gimbal with the help of magnets.

WinFuture also leaked two images of the back mounts and how they may look attached to the back of smartphones. But the video spends a lot of time detailing some of the other software features the Osmo 4 would have. “It shows off a cool dynamic zoom feature, which appears to automatically zoom out as you move the camera forwards to create the classic Dolly zoom effect first popularized by Alfred Hitchcock. Other features, like gesture control and hyperlapse, are returning from the Osmo Mobile 3,” The Verge details the other features.

According to the reports, this model should last about 15 hours on a charge, which is decent, while it will also support USB-C charging.