It’s a fact that far more budget smartphones are sold around the world than flagships. Everyone wants one of the big boys but they tend to settle for whatever their bank account allows. Vivo’s Y91C, a 6.2in Android 8.1-based handset (the word ‘based’ will be important later) lives close to the bottom of the expense ladder. It’ll cost a mere R1,900 in order to own one.

This puts it in contention with Xiaomi’s Redmi range here in South Africa — as well as several cheap Chinese rebrands that we tend not to encounter at Stuff (thankfully, as they tend to… well, suck). That’s also close to feature phone pricing, even below it in some cases. But that’s not what we’re here to ask. What we’re trying to find out is whether the Vivo Y91C is worth its admittedly low price of admission.

Add it to the lineup Vivo’s design choices for the Y91C mirror Xiaomi’s design language, as well as Honor’s budget range of devices. Our review unit featured a plastic back with a vivid blue to black gradient that saved it from being mistaken for an Honor or Huawei at a distance. Fairly slim and grippy right out of the box, the lines are ruined a little by the included thick rubbery plastic cover. You don’t have to use it, of course, but it’s still a good idea. A pretty, broken phone is still a pretty broken phone. Vivo’s thoughtfully included a screen protector from the outset. That’s a nice touch.

The screen is apparently a Halo FullView Screen, which is Vivo’s description for its 1,520 x 720 panel. It’s fairly bright and rather colourful in practice, we’ll give them that, and the bezels are nice and slim. There’s a teardrop notch up front, which houses the 8MP front camera. Around the back is a single 13MP sensor and flash, which protrudes slightly. We’ve gotten so used to dual cameras that this actually looks a little odd. The charge port? MicroUSB, sadly. 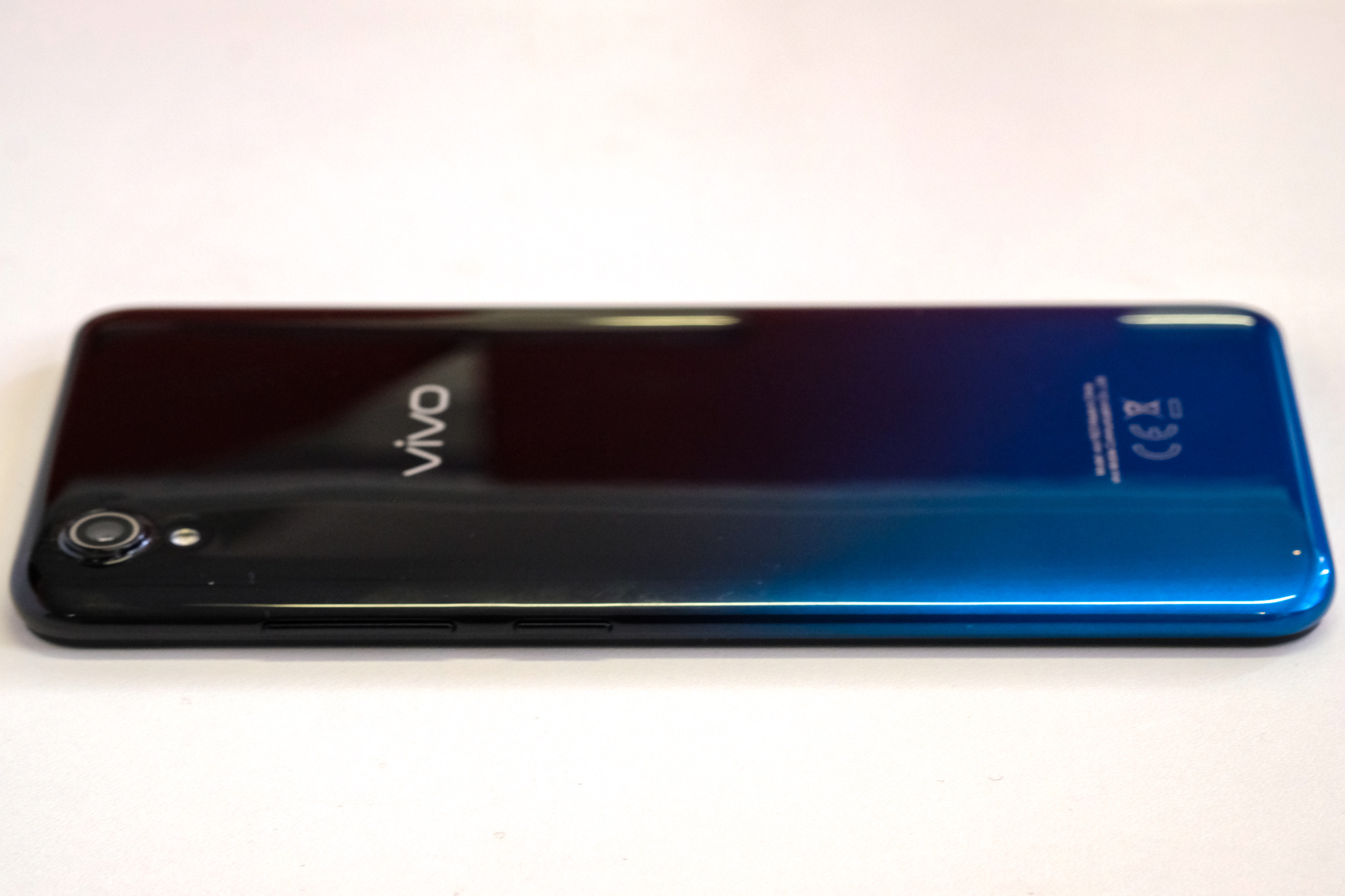 On paper, the Vivo Y91C is a decent enough handset. The MediaTek MT6762V/WR is an octa-core processor with four 1.50GHz and four 2.00GHz cores doing duty with 2GB of RAM in the back. Some online stores here list RAM as 1GB. They’re incorrect, obviously. There’s 32GB of storage (22GB available) and a 4,030mAh battery keeping the handset running. The battery is perhaps the standout feature — the relatively low draw from the CPU and screen give you a fair amount of uptime.

In practice, the phone doesn’t perform quite as well. We hit it with a couple of benchmark tests: Geekbench 5 and Antutu. Geekbench’s results were 158 for single-core and 689 for multi-core performance. That’s… not great. Xiaomi’s Mi 9 clocks the multi-core score for single-core performance. Then again, that phone costs more than three times what Vivo’s handset does.

Outside of the benchmark environment, there’s noticeable lag when using the handset. Swapping between apps sees hitches and stutters, the camera app slows down more than it should — which could be the fault of the camera sensor or there might be another culprit. That’s Vivo’s FuntouchOS, which is based on Android 8.1. Like we said, on paper, this phone should be faster. It’s probably the operating system holding this one back. There doesn’t seem to be much of a change between vanilla Android and the FuntouchOS — menu structures are similar and navigation isn’t much different at all, and the pull-down menu doesn’t have many options available. At all. Also, FuntouchOS is overly permission-hungry for our tastes.

One of the first things that turn up when setting up the phone is the privacy policy for the TouchPal keyboard, which “will record your register information (Google, Twitter, or Facebook).” We’re not especially keen on giving a keyboard access to login details, particularly when TouchPal parent company CooTek had security issues with Google’s Play Store last year.  You can decline this, but it is deceptively arranged — the ‘Decline’ key is tiny and tucked away in the upper right corner of the popup. The ‘Accept’ key looks like the only available option at first glance.

Setup takes several steps more than it would with a stock Android system and everything wants access to everything else. If you don’t turn on Location Access for the Vivo-made image gallery, you can’t use it at all. If you’re in the habit of not tagging your images with location data, this seems like quite an oversight. Why force users to sort images by location when you’re already not recording that info? Other apps also seem too keen to hoover up data that they don’t really require. A downloaded app from the Play Store doing this would make us suspicious. When a whole phone’s doing it… yeah, no. Don’t bother with the digital zoom either. Even in ideal lighting, moving away from standard focus introduces noise right away. Zooming in slows the camera app even more. It doesn’t change anything but the app delay (and then the focus delay) will see you missing the majority of your shots. Still, when outside in natural light or asking a group to smile for the birdie, you should get some Facebook-worthy shots. Not Insta, though. It’s just not that good. Even with the now-obligatory face-smoothing tech enabled. Much of the criticism above isn’t really criticism at all. That’s just what you get when you’re buying a sub-R2,000 smartphone. It’s never going to perform like a flagship — this is one of the few problems that go away if you throw money at it (ie. buy a better phone). The only real downside is FuntouchOS, which really does appear to drag the whole works down. That said, we’ve also seen slower, more expensive smartphones. What’s a problem this year would have been mid-range performance a few years ago. If you’re not too sensitive about your permissions and can get by with a so-so camera, Vivo’s cheapest entry will do the job you want it to. And it’ll even look good doing it. Unless you have the cover on, which you really, really should.