Meet the Fitbit Charge 2 and Flex 2

We’ve worn almost every major fitness tracker on the market, and keep coming back to the Fitbit Charge HR because of its understated design, simple interface and intuitive app. Now Fitbit has announced its successor, the Charge 2, alongside a new entry-level unit, the Fitbit Flex 2. The Charge 2 will go on sale in South Africa this month for R3,000 with the Flex 2 set to follow in October, priced at R1,900. So, what’s changed?

Fitbit’s made our favourite wearable even better. The display’s been updated, you can now swap or replace the wristband (something we loved on the first generation Flex and missed when we switched to the Charge HR) and it’s finally waterproof. We’re big fans of the always-on heart-rate monitoring of the Charge devices, and the feature now 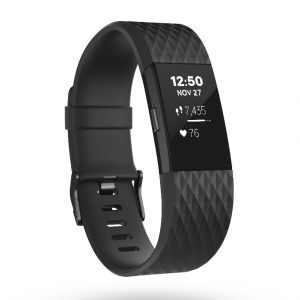 gets a further boost with estimated VO2 max readings. This, in conjunction with resting heart rate, is one of the best measures of fitness, and it’s the sort of thing we’ve only seen on really high-end sports watches until now.

The updated Charge also offers guidance on how to improve your fitness by increasing how often or how intensely you exercise, or by slimming down a little (we’re working on it, okay?).

Another new edition is guided breathing sessions (something Apple’s recently added to its Watch) called “Relax”. According to Fitbit, “Two-and five-minute sessions display real-time heart rate visualisations, animations and vibrational cues to help you align each inhale and exhale with the guide, and find moments of calm throughout your day”.

As with previous Fitbits, if you want GPS data you’ll still need to take your phone with you when you’re running, skipping or whatever it is you do to get hot and bothered (and earn those points for your Discovery Vitality smoothie). Or you could get a Fitbit Surge, of course, but we found that if you’re looking for a sportswatch with built-in GPS, there are much better options out there.

The display on the Charge 2 is four times the size of the one on the Charge HR, which should mean a wider range of clock faces and way more info at a glance. We like. The original Flex was our first introduction to Fitbit’s products. We loved the fact that it could survive a shower and let us swap out wrist  bands (sometimes to match our outfits, sometimes because they wore out). Those features remain, but Fitbit’s now added “swim-proof” to the feature list, made the device almost a third smaller, and created a slew of wristbands and pendants for users to choose from.

Water resistant up to 50 metres, the Flex 2 won’t just survive being submerged, it’ll also track your swims with info like laps, duration and calories burned. Like other Fitbit devices, the Flex 2 promises to automatically recognise a range of workouts, including walks, runs, bicycle rides, time on the elliptical trainer, aerobic workouts and, now, time in the pool, too.

The Flex 2 keeps the simplicity of the display from the original Flex, but now uses colour-coded lights to not only show how close you are to your daily goal, but display basic call and text notifications for your smartphone. Fancy, eh?

We’d love to see the same sort of swimming smarts in the Charge 2, as it looks like we’ll still need a separate device if that’s our day-to-day wearable and we want to track our pool-time, but so it goes. We have it on good authority (our mom’s) that one can’t have it all. At least this is pretty darn close.

Still using a Fitbit Ionic? It’s being recalled – Here’s how to go about getting a refund in South Africa