Garmin's fitness tracker isn't the company's most advanced product, but it'll do for the average user. The R2,600 price point is mighty attractive and it'll track most basic workouts (and a whole bunch more besides). But if you're considering buying a special pair of running shoes in the next few months, it might be worth spending more on something a little more high-end.

Garmin is best known for its fitness watches, the likes of which are extremely difficult to beat. The Garmin Vivosmart 5, from the company’s fitness band lineup, must work harder to outdistance the pack. Part of this is that its Fenix lineup, as well as Forerunner devices, more or less demolish the competition. If you’re a fitness nut, that is.

But the more casual market, which the Vivosmart 5 is aimed at, is a tougher nut to crack. Garmin does advanced tech extremely well, but it can get bogged down in details. Competitors, like Fitbit’s Charge 5, manage to outdo this wearable on a few important fronts. That doesn’t mean that Garmin’s wearable isn’t worth picking up. At R2,600, it’s extremely attractive. But the Charge 5 is better — which it should be, at R1,400 more. The Vivosmart 5 follows our favourite wearable design. That is, it’s a simple black band that doesn’t jump out at you. It could simply be a section of rubber looped around your arm, for some reason. It’s nice and unobtrusive. The band is a rubberised plastic, with a textured outer side. It looks great, as soon as you put it on. A few weeks later, once life has had some time to happen, that textured surface will collect some schmutz. But the band has a wristwatch-style binding, so at least it’ll stay in place.

The tracker itself is a solid section that pops right out of the band. This makes it simple to swap to another strap and clean the tracker if things have gotten a little… sweaty. The tracker consists of the usual bits – a touchscreen up top, a heart-rate sensor underneath, and then something a little unusual for 2022. That’d be the physical button, which lives just below the screen. That physical button, believe it or not, is a pretty welcome addition. We’ve been using Fitbit’s trackers for a while and while they’re decent, the complete dearth of buttons is a little… concerning. There’s nothing like holding down a button when something’s gone wrong for soothing the nerves. It’s not the same on a touchscreen.

This also means that navigating the Garmin Vivosmart 5 is easier than it might otherwise be. The touchscreen works when swiped in various directions, with a touch of the button activating an option. Or going back. It takes some getting used to the context-sensitive nature of the button, but it’s handy at the end of it all.

But if the button is great, the screen… is a little less so. Garmin has opted for a dinky little monochrome display. And that’s being totally literal. It can be hard to make out what’s on the watch face. If you’re in bright sunlight, you might as well forget about it. In addition to being small, the mono display is also rather dim. There’s no OLED contrast here to save the day. Pity. But, again, it costs R1,400 less than the Fitbit Charge 5, which has that lovely colour OLED display and simple navigation. But where Garmin shines a little brighter is with its tracking. It’s not on par with the Fenix, or even the Forerunner series, but you can expect more detailed metrics than you’d get from Fitbit’s devices. Blood oxygen, stress, heart rate (including notifications if it’s too high or low), sleep, calories, and more are enabled from the very beginning. There’s even fall detection, of a sort.

But it doesn’t include an internal GPS at all. This isn’t ideal, but it’ll borrow your phone’s sensor at need. That does mean you’ve got to haul a (connected) smartphone along to get some data back when out on the road. Like we said, not ideal. But it’ll track a range of activities — running, mostly — and do a decent job of it. Perhaps the best bit is that you don’t need to pay a subscription to gain access to Garmin’s deeper insights. Looking at you, Fitbit.

Battery life is decent enough, provided you don’t have full blood-oxygen tracking turned on. Leave that option ticked and you’ve got about half a week between charges. Set it for more intermittent tracking and you’ll see yourself spending about a week in between charges. That’s fine. Just charge it on your rest day, then. But we’re a little less enchanted with the charger. You can see the proprietary charge port in the image above. Over time, we guarantee it’ll become a chore to keep this one plugged in. You know, just in case you’re thinking of hanging on to the Vivosmart 5 for a couple of years or more. 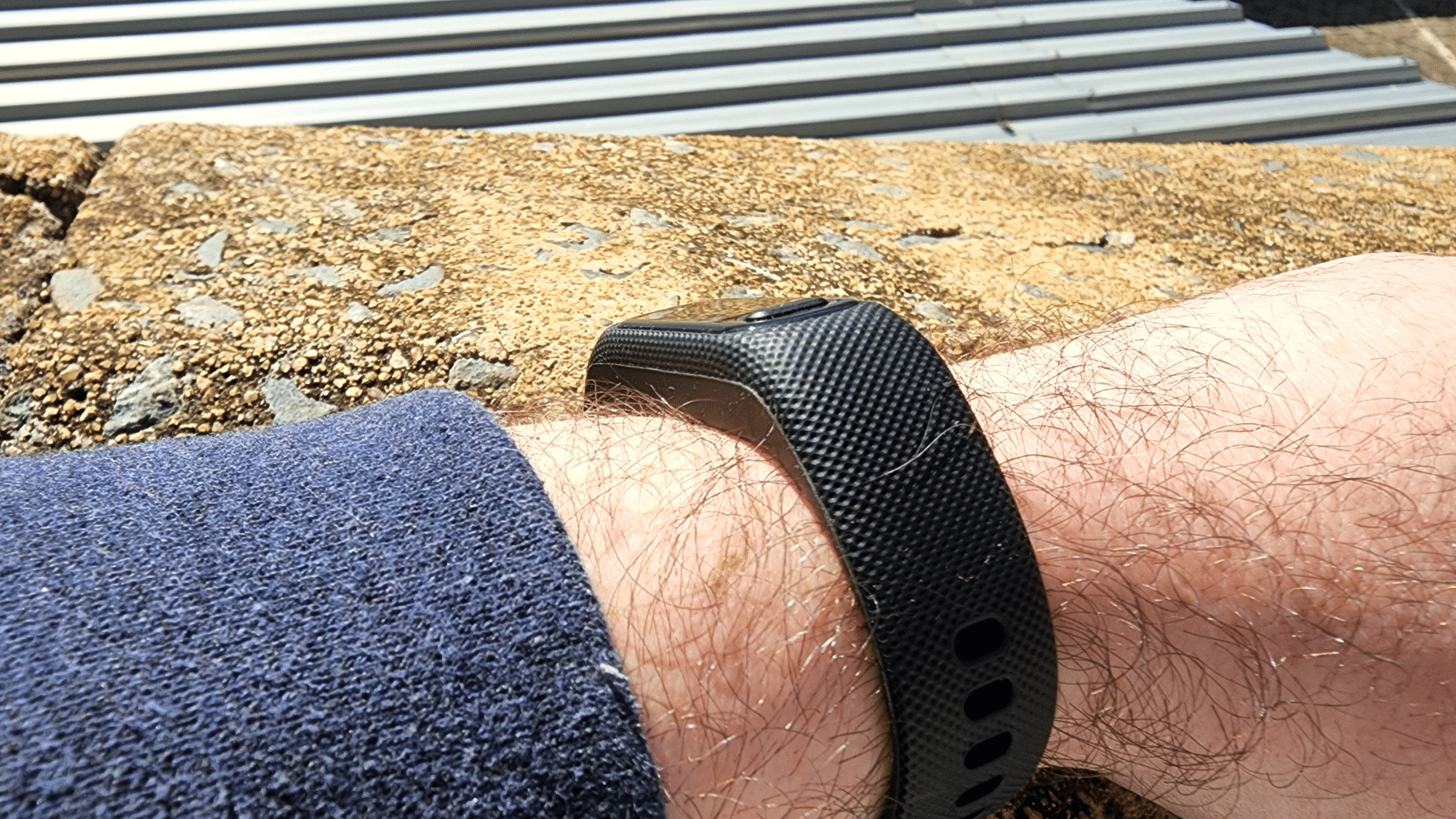 The Garmin Vivosmart 5 is a strange-ish product. It’s an affordable fitness tracker that’ll handle basic movement and some advanced body tracking. It lacks a few of the features seen in the Fitbit Charge 5, but if you’re considering spending the R4,000 on one of Fitbit’s bands, you might as well slap an extra R100 onto that total and get Garmin’s excellent Forerunner 55. That’ll blow the Charge 5 out of the water, in terms of fitness tracking. It does a little less well, if you’re just looking for a simpler, smarter band, however. Still, if you’re not thinking of training for a marathon in a hurry, then the Vivosmart 5 has everything you need to keep an eye on your general health and movement. And it does so a fair bit cheaper than that other band does.