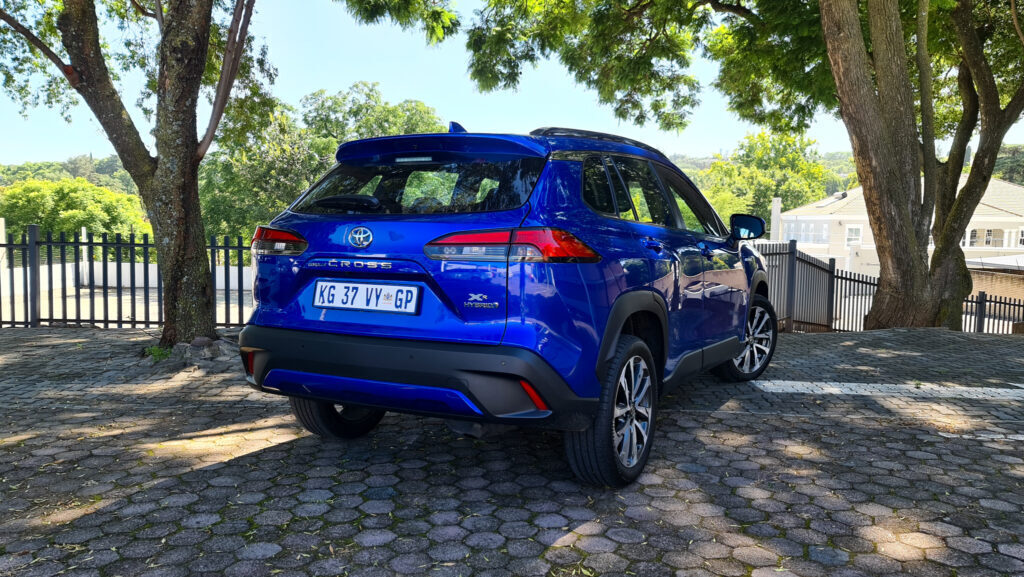 As EVs start to trickle into the South African market, it’s becoming increasingly clear that we have different needs and specifically South African problems. This is where the Corolla Cross Hybrid makes complete sense. It's the most affordable EV-type car you can buy right now.

It feels like the rest of the world is increasingly focused on electrifying transport, but South Africans don’t necessarily have many EVs to choose from. There are many reasons for this, but the result is that the only available fully-fledged EVs are in the upper market. And you’ll pay at least R700k for one. Toyota’s recently placed another (more affordable) option on the menu, albeit a hybrid: the newly launched Corolla Cross Hybrid.

That means you’re getting the best of both worlds – both a petrol and an electric powertrain. A hybrid engine comes in two common flavours: plug-in and closed-loop. The first type’s electric engine requires physical plug-in charges, which means you’ll have to top it up with Eskom’s juice every now and then.

The Corolla Cross Hybrid, however, is a closed-loop hybrid. This just means that the 1.8l petrol engine is fitted with a generator that, in turn, charges the electric engine. In exchange, the electric engine takes some of the load off the petrol one. The result? Lower petrol consumption, and a lower petrol bill every month.

So while you may not cut out petrol completely yet (it’s not exactly viable in the current coal-powered South Africa), you’ll no doubt improve daily petrol consumption using a hybrid, like the Corolla Cross Hybrid 1.8 XR we recently tested.

The price doesn’t match the mug

If you’re not in a moving Cross Hybrid, you won’t necessarily know it’s an EV. It’s a wonderfully aesthetic mid-sized SUV that won’t look out of place on any South African road. A few small touches, like the blue glow in the Toyota emblem on the back of the car, hints at its ‘greener’ existence.

Our review unit was the top of the range XR variation, which comes with a range of extras, like 18in alloy wheels, radar-guided (adaptive) cruise control, curtain airbags, lane-departure warning, electric adjustment for the driver’s seat, front and rear parking sensors, and different colour treatment for the (very flashy) front grille.

It offers an impressive presence and lifts a few key design features from the larger, fancier Rav4’s design. Inside, you’re greeted with leather seats, a buttload of space in the back and ample quality-of-life features. This includes a completely capable infotainment system, which comes with Android Auto and Apple CarPlay.

In the cockpit, you’ll find all the usual accessibility and driving controls, a foot parking brake and the aforementioned infotainment system in a comfortable setup. That foot parking brake tripped us up for a good few minutes, but once you get used to it, it makes a lot of sense. Toyota’s not new to the hybrid game. It manufactured and commercially sold its first hybrid – the Prius – back in 1997. So it’s had ample time to refine the technology. This Corolla Cross range is also being manufactured right here in Mzansi, at its production facility in Prospecton, KwaZulu-Natal.

That makes it feel like it’s made for South African environments – but mainly cities. The electric powertrain gets preference in stop-go situations, which you commonly find in town. This is where that electric motor shines, and it makes for responsive pull away with little to no sound.

Once the 40kW electric motor runs out of capacity, it’ll call in the help of the 72kW 1.8l petrol motor, which can sound noisy through the automatic CVT gearbox on occasion. That petrol addition doesn’t feature a turbo – but you don’t necessarily need it with this combo.

We found that the Cross Hybrid became slightly sluggish and noisy when doing more demanding drives (uphills, overtaking). But considering the good points on this vehicle, we can let that slide. You’re not buying a Corolla Cross Hybrid for its power – you’re buying it to use less petrol and ferry things/people around.

An EV for South Africans

The dash comes with a few cool aids to show how the electric/petrol combo is performing at any given time. In the pace of a rev gauge, there’s a ‘Charge > Eco > Power’ gauge. That’ll show you how economic you’re driving, and when the car kicks in regressive brake-charging. Once you start braking or take your foot off the petrol, it’ll flip that friction energy into electric power and charge up the EV powertrain just a bit.

In the middle console, the infotainment system features a graphic that shows how the power is being distributed in real-time at any given moment. We found this tool useful to show family and friends exactly how the closed-loop hybrid system works.

After a drive, you’ll be greeted with an ‘eco score’ – a score out of 100 that depicts how economical the drive was. This adds a gamification kind of element, which will promote better scores with each drive, bringing the fuel consumption down even more.

We found fuel consumption brilliant while zipping around Johannesburg for a week. The lowest we managed to get consumption is 3.9l per 100km. We averaged around 6.5km per 100km, which is good for a mid-sized SUV driving in peak traffic daily. As EVs start to trickle into the South African market, it’s becoming increasingly clear that we have different needs and specifically South African problems. Fully-fledged EVs are currently too expensive for the majority of the public, and reliable sustainable energy is not widespread yet.

This is where the Corolla Cross Hybrid makes complete sense. While a hybrid of this type offers similar fuel consumption to a diesel-powered vehicle, it’s much more sustainable and eco-friendly.

There are worries about its longevity, resale value, part availability and trade knowledge to service the electric motors. But the fact that these are manufactured in South Africa helps a great deal. Toyota offers saturated support throughout South Africa. And the numbers speak for themselves – there is currently a 3-month waiting list to take ownership of a Corolla Cross Hybrid.

If we’re committed to transitioning into a more eco-friendly nation, hybrid technology may be the first logical step. It helps that the Corolla Cross range starts at R350,000 for the non-hybrid variation, while the most inexpensive hybrid, the XS costs R413,000. The Cross Hybrid 1.8 XR that we tested comes in at R448,300. Which makes this the cheapest half-EV you can currently buy in SA.