Oculus Quest 2 – Come with us on an(other) entertaining Quest The Oculus Quest 2 is a great headset and, in most of the ways that really count, is better than its predecessor. But Facebook has made a few design changes that mean that this one - while a better device - is missing or has downgraded features we had before this. Also, mandatory Facebook login? Really?

The nice thing about virtual reality is that you control just about everything that happens there. Unless you’re playing Arizona Sunshine or Half-Life: Alyx or something, in which case you’re reacting — but the environment is tightly controlled. Nothing like real life, which is why it feels better and better to escape into VR these days. And devices like Facebook’s Oculus Quest 2 are attempting to make that easier than ever to do.

And succeeding. Purely based on the hardware, if you want to dive into a really compelling virtual reality experience without buying a massive PC and a headset made by HTC then you’ve found the droid you were looking for. The Oculus Quest 2 is an amazing wire-free VR experience that will… probably… cost you far more than you were expecting to spend on the Oculus Store. That said, it’s not all rainbows and positivity. So exactly like real life, then.

Designed to be… cheaper This isn’t the first Quest we’ve been on, obviously. The first Oculus Quest was awesome enough to be named Stuff‘s Gadget of the Year in 2019. You know, in the Before Time? The Long, Long Ago? This time around there are a series of improvements in the headset but Facebook has also opted to make its build quality a little cheaper in places.

This is particularly apparent in the default strap that ships with the Quest 2. It’s comfortable enough but it’s a step back from the original Quest, almost like those canvas straps you might remember from your school bag. Okay, a little more premium than that, but still.

But we also got the Oculus Quest 2 Elite Strap and Carrying Case to play with and that makes this hardware a lot more premium… for an extra sum, of course. The Elite strap also bumps up the battery life of the headset considerably, making it worth getting. But, once you buy all the extras, you’ll while up spending what you would have if Facebook had just packaged everything together. The things people do to drive sales… The Quest 2 has one feature that we really, really don’t like. Well, it’s kind of a bug but Facebook doesn’t seem to think that way — in order to use the Oculus Quest 2, at all, you need to sign into your Facebook account. If you don’t have one, you’re gonna have to make one. It’s non-functional without it and, if you happen to delete your Facebook account at any point, you’ll also lose everything that you bought from the Oculus Store. Gone. Vanished. No way to recover it.

It’s not much different from deleting your Microsoft account and losing your Xbox One purchases, we suppose, only Microsoft isn’t sucking up user data from as many avenues as it can in quite the same way as Facebook. Not that it matters all that much — someone will come along and jailbreak the Oculus Quest 2 so you don’t need to send Facebook telemetry of every twitch you experience while playing Superhot. But if you’ve got a thing about Facebook, this… isn’t the device for you. 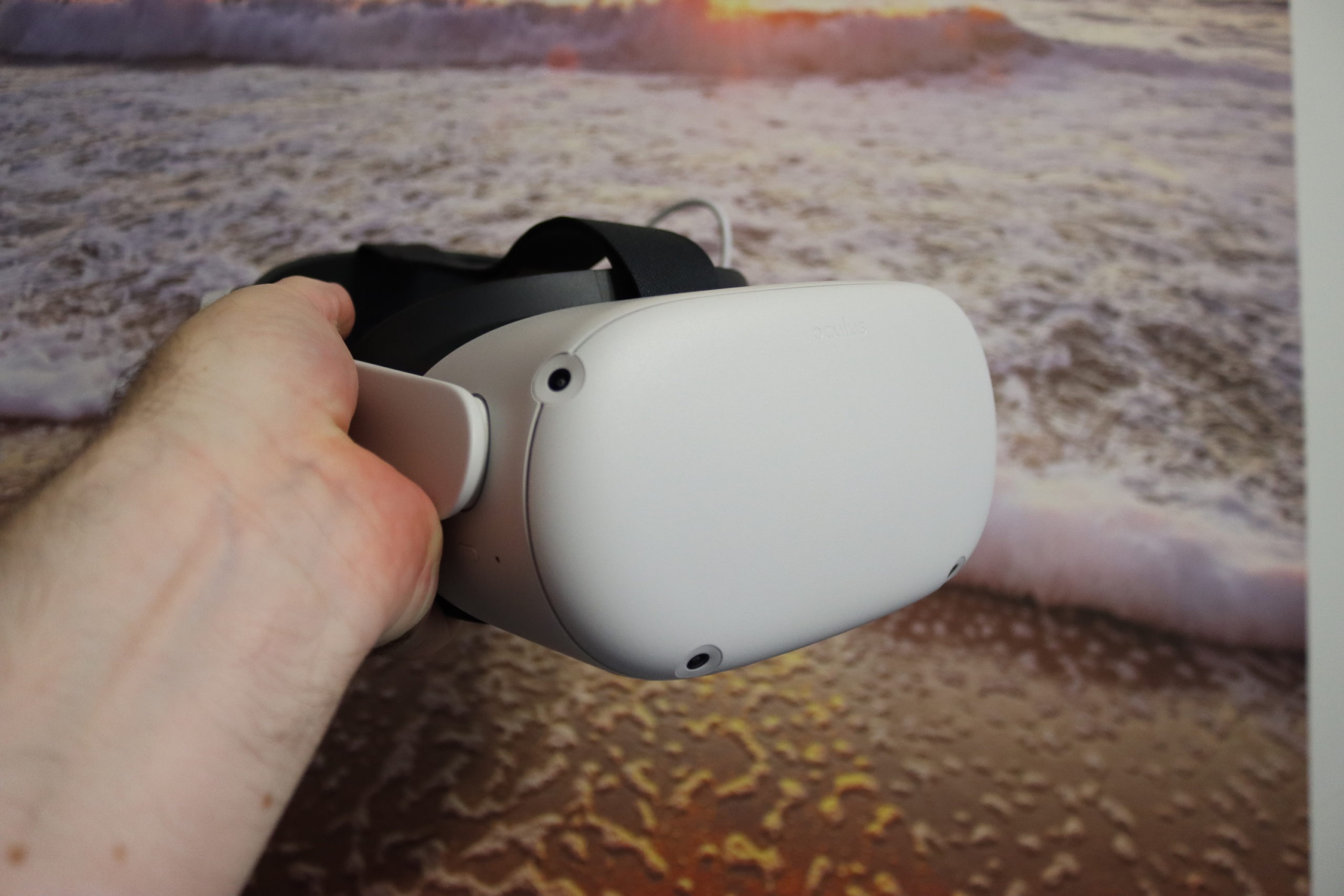 Which is a pity because, aside from the future dystopian corporate government that owns it, the Oculus Quest 2 really is an excellent slice of VR. Improvements have been made to the device’s refresh rate — though the best bit was a 90Hz update that came after the initial launch. The resolution was increased for the Quest 2, to 1,832 x 1,920, and it makes a difference. But if you’re prone to VR nausea then all the resolution increase will do is postpone it for a while. That’s fine, it happens to the best of us.

Internally, there are also improvements — storage, for one, with either 64GB or 256GB (expect to pay R17,300 for the latter), but also the processor and other bits. The included Snapdragon XR2 is an upgrade on the Snapdragon 835 used in the original Quest, and there’s more RAM in here too. You can expect 6GB in your Quest 2, which puts this headset in the realm of really powerful smartphones. And it shows. There’s no real lag when navigating around the various virtual spaces you’ll inevitably download.

What annoyed us a mite was the change in how you adjust focus for the headset. The original Quest had a slider, which let you tweak your interpupillary distance while wearing the headset. This time around, the lenses themselves click left or right to achieve the same effect. It’s… a bit silly. If you don’t fit one of the set options or, worse, are squarely in between settings, then you won’t get the best possible experience. We’re not sure what Facebook was thinking in making this feature less good, but sure. You do you.

The included Oculus controllers are also somewhat of a step backwards. They’re more like those found with the Oculus Go — there’s more of a plastic feel and a little less of the sturdiness the first Quest offered users. But, for all that, they’re still hugely comfortable to use. If you’ve held a game controller since the Sony PlayStation first got thumb-sticks, you’ll find these easy to navigate.

There’s also the option to use hand-tracking with this headset. Which, actually, works. That’s impressive in itself but it’s more of a curiosity at this point. You’ll always have better results using the controllers. The time will come when your hands are just as accurate but your hands don’t feature several input buttons right now, do they?

As for usage — nothing’s changed from the last Quest. The Oculus Quest 2 is a breeze to set up, from boot to up and running takes just a few minutes (depending on how speedy your internet connection is). If you’re used to the control methods then skipping Facebook’s tutorial is totally doable but you shouldn’t skip the explanation of how to set up the Guardian. That’s a dedicated play-space that’ll keep you inside your virtual world. You mark out a section of floor with the controllers, stand inside and are in another reality. Come too close to the border and you get a holodeck-like grid warning you. Step past it and you’ll see greyscale reality. Or crash into a wall. Depends where you put the barrier, we reckon.

The Oculus Quest 2 starts at R13,300, but you’re going to want to throw in that Elite strap and the carrying case, which will bring your costs to about R20k, all told. That might seem like a lot of money but you can easily spend that one a moderate VR-ready desktop PC before you add in the cost of a headset. And, if you want to go wireless, that desktop machine’s headset is going to hurt your wallet.

The Oculus Quest 2 improves on the original on a purely technical level and, even if Facebook’s stripping out of premium features is a little questionable, this is definitely the superior bit of VR hardware. It’s still not quite ready for mainstream but it’s closer than ever before. And if you’re keen to try out a few genuinely excellent examples of VR gaming, you shouldn’t be doing it wearing anything other than the Quest 2. It’s not quite the future, but it gives you an excellent idea of the potential it holds.