You are at:Home»Uncategorised»Land Rover Defender 110 – Where we’re going, we don’t need roads

If you're going to tackle a space without roads, this is the way to do it. It's tough, inside and out, drives like a dream and is more comfortable than getting away from it all has any right to be. You'll want to spend a lot of time in the Defender 110 - and, considering what it costs, that's probably a good thing.

There are two ways to drive a 4×4. There’s the right way, which means to take it off-road to some far-flung destination, and then there’s the wrong way, which is to make sure you never ever leave tarmac and city streets. Land Rover’s new Defender 110 looks like it was designed explicitly for the latter, while being exceedingly capable at the former.

Which, really, is how you want to go off-road in 2020. ‘Roughing it’ is fine and well but there’s no reason to be uncomfortable on the way to your destination. And taking the 110 anywhere ensures you’ll be very comfortable all the way there. Well, physically, anyways. Family drama is on you, but there likely won’t be too many instances of ‘are we there yet?’ We’ll be including the spec for our review Defender below but it arrived with all of the bells ands whistles, both interior and exterior. And what an exterior it is. There are smooth lines in evidence throughout but you’re never left in doubt that this is Land Rover’s signature Defender. Both modern and familiar, the weighty rear section gives way to a sturdy front end and a very imposing nose. Our Defender’s bonnet also featured textured accents that looked designed for folks to sit or stand on – but the rest of the vehicle was far too pretty (but tough) to allow that.

Special mention goes towards the matt green paint job (Pangea Green with a Satin Protective Film, as Land Rover terms it). It looks gorgeously modern, while still being at home in the bush — which is a bit of a theme for this vehicle. Sitting atop 18in 5-spoke rims and their attendant off-road tyres (both of which are stock, by the way), this fully-loaded Rover looks ready to leave whenever you’re packed.

And there’s plenty to space for packing, with room for a family of five (adults, if you like, with space left over in the cabin) and still more packing space in the generous boot. Our review car also had a luggage rack on top, which was a little hair-raising to have. Your clearance may vary.

Our favourite sort of self-driving 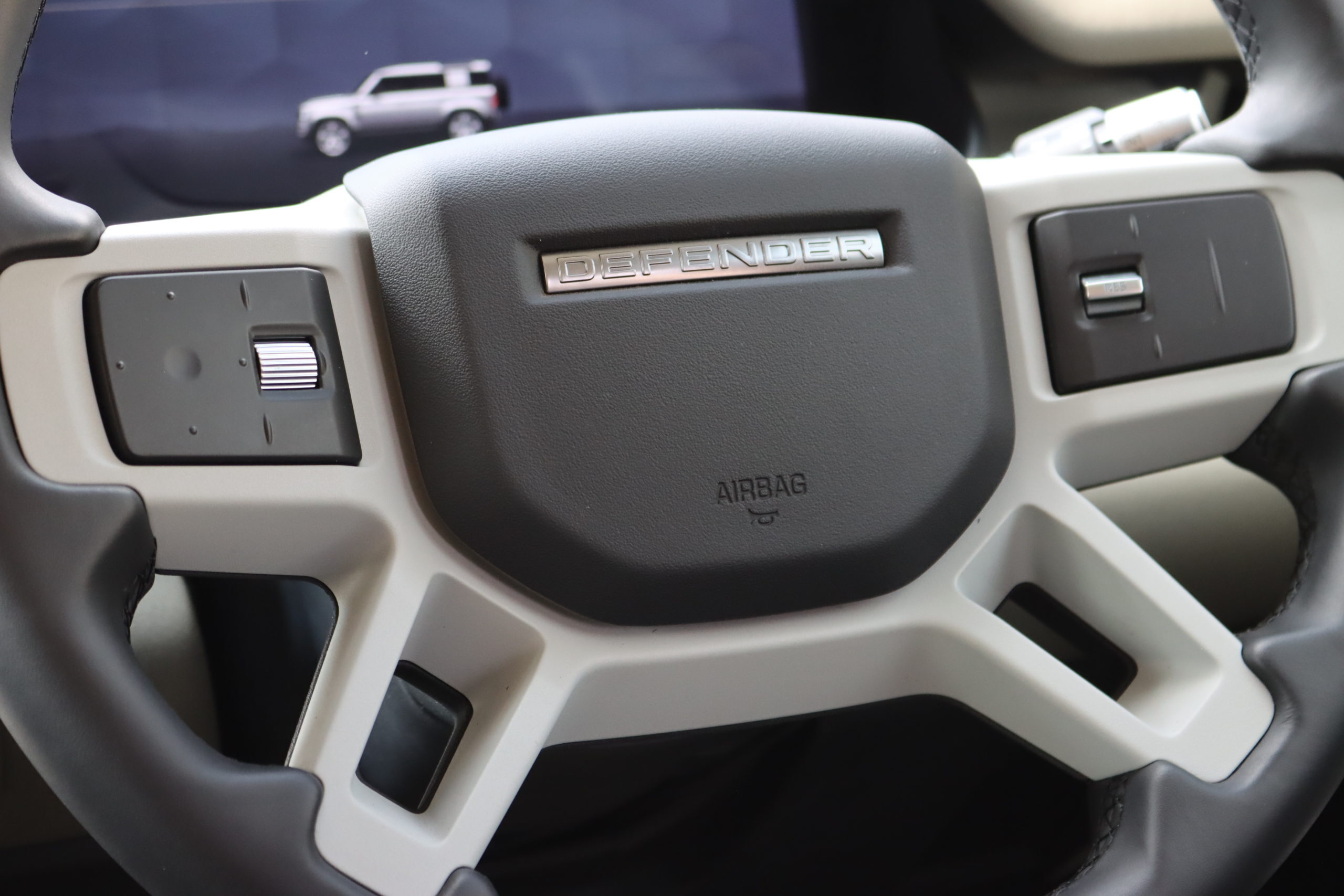 If it’s visually appealing, this Defender 110 is just as attractive in terms of the tech it’s toting. We could take up a colossal amount of space just listing it all. There’s a generous 12.3in infotainment touchscreen where all the semi-mysterious physical controls can (also) be tweaked. It’s pretty smart at knowing what you want and when you want it, throwing up navigation, audio or driving options as needed.

Setting up a Bluetooth connection is very simple, so you can handle navigation using Google Maps, or the Defender’s own built-in solution. Which… has its ups and downs. The tachometer and speedometer are also represented on a screen, with navigation data being visible through the steering wheel spokes. The only complaint? It’s not quite as user-friendly as Google’s solution is.

Other features include the ClearSight rear-view mirror, which uses an exterior camera to ensure you always know what’s going on behind you. A neat little feature, from the Driver Assist Pack optional, is the blind-spot sensor which shows, using an icon on your rear-view mirrors, whether there’s a car in your blind spot. Also present are: air quality sensors and cabin ionisation (which works seriously well), the ability to change your suspension based on the road (or lack thereof), adaptive cruise control and enough cameras and sensors to make sure you’ll always have at least some warning in the event of a near-collision.

On or off, it’s all great 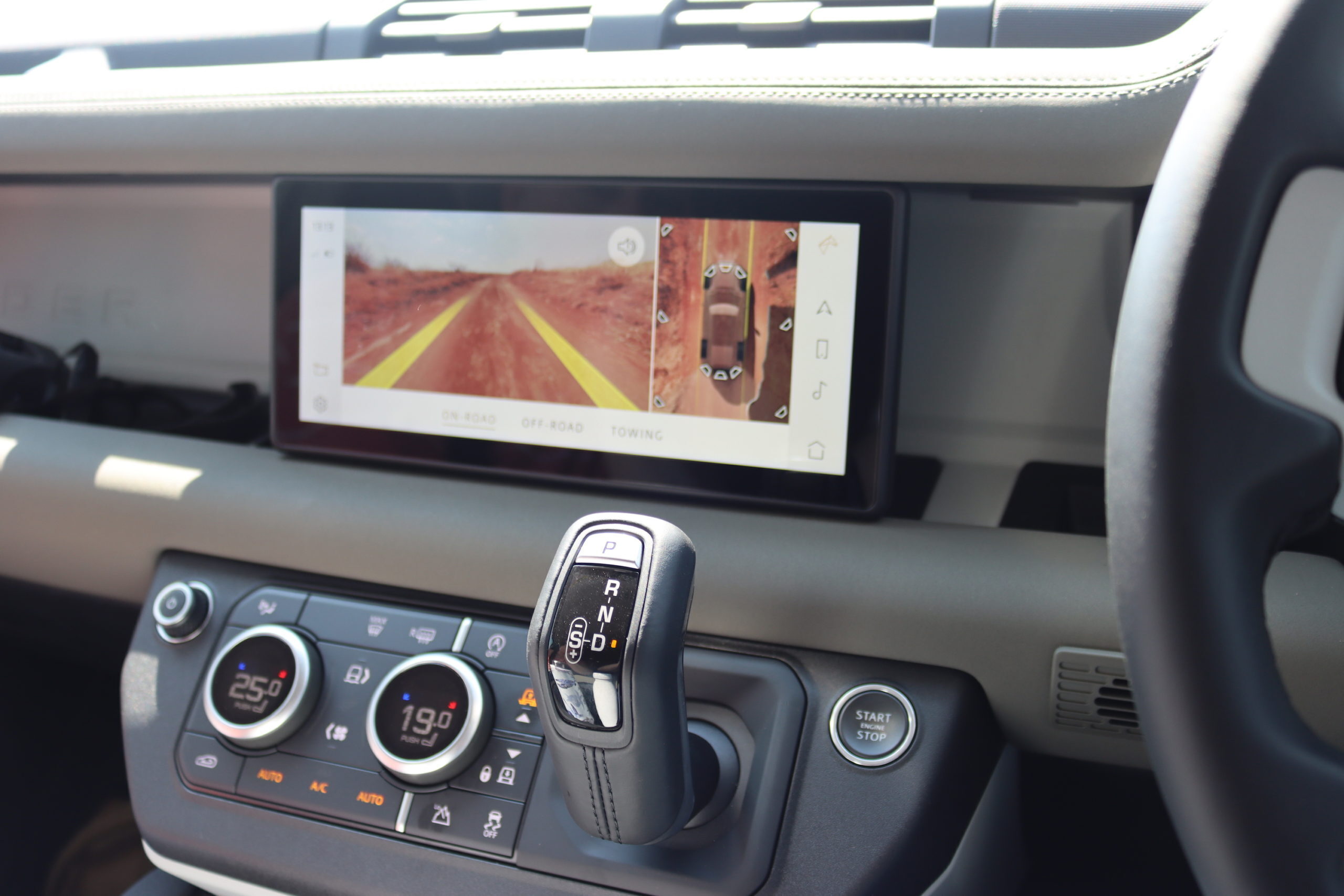 There’s loads of tech, is what we mean to convey, and it all works as intended, or better. But also, the Defender practically drives itself. The automatic gearbox and intelligent stop-start functions mean that, in traffic, it’s alarmingly comfortable to drive for something this size. Seriously, we were almost eye-to-eye with truck drivers. That’s a lot of ground clearance. Small compacts just about disappear from view, which is why the internal 360° view of the ground around the Defender was such a blast. Clear and detailed, it let us spot (and keep clear of) very small dogs scurrying around the wheels while navigating into a carport. And, if you’re the sort to never go off-road, you’ll never park skew in a parking space ever again. Unless you wanna. 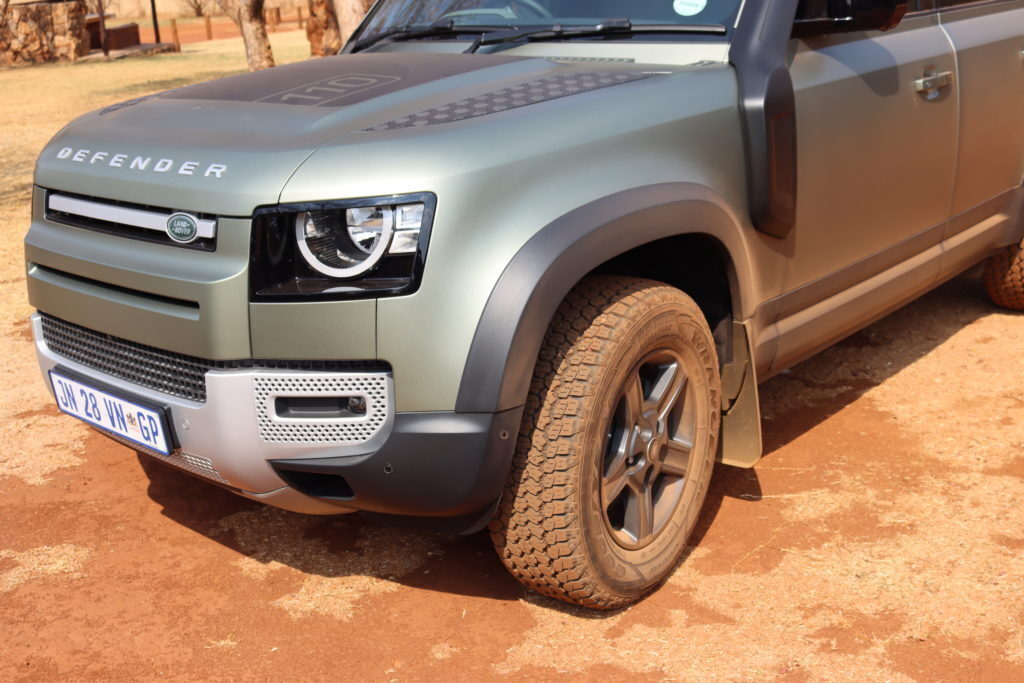 But it’s meant to go off-road and that’s exactly where we took it. Not serious off-road, because we’re rookies and Land Rover doesn’t just hand out R1.3 million vehicles so they can be rolled into a ravine, but off-road nonetheless. A game-drive just outside Johannesburg, specifically. And said trip cemented the idea that there’s only one way to tackle uncomfortable roads: as comfortably as possible.

Whether it was bouncing over rutted roads and protruding rocks or ambling down a slippery gravel slope in low-range, there isn’t much the Defender couldn’t make seem entirely comfortable. It just rolls over obstacles that would have you fearing for the undercarriage of most compacts and sedans, the cabin barely registering that you’ve just passed over a road-sized rock that would have crippled a BMW. It helps that suspension can be adjusted — at the touch of a button — for a smoother ride when the road sucks, even if it makes it a little harder to clamber into the cabin. It’s totally worth it for the added smoothness.

While the Defender is at its absolute best at low-speeds on terrible roads (or in load-shedding traffic, which is the same thing), it also handles itself on highways. It’s not the fastest vehicle you’ll put on the N1 but it’ll roar up to 120km/h in short order and stay there no matter the incline you happen to hit. Which is an awful lot of words to use to say that it’s fun to drive, no matter where you are. This isn’t an anecdote or something that we heard second-hand — every time we stopped somewhere in the new Defender 110, people were keen to check it out. Whether it was in the parking lot at Woolworths or out in the middle of the bush (where there were people taking photos of and with it), folks loved the way this Defender looks. Part of that was the striking visual choices Jaguar Land Rover made with regards to paint job and extras, but the rest of it was the Defender’s overall design. And, happily, it’s just as attractive on the inside and is an absolute dream to drive. It may take a little more skill than we posses to get it up Sani Pass in one piece but the off-road and advanced driver assists make it seem doable — even for a complete noob. Even so… tackle a few practise tracks before hauling ass up the mountainside. It costs R1.3 million, after all.