Time for a short history lesson. In 1984 a gentleman by the name of Akira Toriyama created a manga series about a little boy with a tail. This manga went on to be made into a TV show and, later, formed the inspiration for a whole new series about the same little boy – now all grown up. If the title of this review didn’t clue you in, that 1989 TV series was known as Dragon Ball Z. Now, if you already knew all of this, then Dragon Ball Z: Battle of Z might be the game for you. If you don’t have an encyclopaedic knowledge of the Saiyan race, Nameks and power levels however, then Battle of Z will probably be an irritating and somewhat laborious experience.

Dragon Ball Z: Battle of Z is a departure from the usual games in the series. Past titles have been defined by their combat system and a variety of game modes that have veered from massively complicated to just somewhat involved. Battle of Z is closer to its most previous ancestor, Ultimate Tenkaichi, in terms of gameplay but it has been simplified even further to account for the changes that have been made to the available game modes. 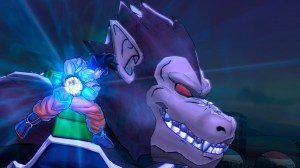 This may take some explaining. Battle of Z features a single player mode that contains a basic reproduction of the original anime series. There is a similar combat tree that permits players to take on the same bouts from the perspective of the villains of the series and then there is the Another Age bouts that is a mixture of new scenarios and events from the full-length Dragon Ball Z motion pictures.

By itself, this isn’t new. The biggest change is that there are four players on-screen at once in the single player mode. One is the player, the other three are supporting character that will engage with enemies, assist players and revive them. Each of the 67-plus characters available in Battle of Z has been given a class that defines how they will play. Everyone’s favourite Saiyan Goku is a melee fighter, suited for constant assault. Saiyan prince Vegeta is a Ki-class, better used as a ranged fighter. Goku’s son Gohan is a support class, though later incarnations (i.e. Super Saiyan) see a Melee appended to that. Krillin is an interruption class fighter, who is best used to distract enemies. The point of all of this is that the single player mode is just a training ground, either for the online co-op or the Battle mode which will see up to eight players taking each other on in teams of four a side. In theory, this is the best thing to hit a Dragon Ball Z game in the entire history of the series. In practise, it doesn’t work out so well. The concessions made to create a workable online arena battle for the game in terms of controls means that combat is limited to two buttons (plus combinations that are sometimes tricky to use – in a bad way), player transformations have been left by the wayside and players are unable to charge their own specials effectively.

The problem with Battle of Z isn’t that changes have been made. The problem is that not enough changes have been made. In attempting to stay true to the series, which the developers have managed by stripping out all but the most rudimentary of narrative in the single-player (you need to be a huge fan to appreciate how they’ve altered the same fights that have been replayed a million times), they’ve lost the broader appeal that Battle of Z might have otherwise had. Players will also get to a point where combat, even with the simple but effective character levelling system in place, just becomes too much of a chore for them to continue. Attempting to take down an enemy starts to feel like work rather than fun and there’s the added hassle of online games. It’s one thing if you’ve got a circle of like-minded friends to team up with against a Saiyan Great Ape or one of the other brutes that populate the landscape, it’s another to venture online without any backup and the idea that this is supposed to be fun somehow. You will be disappointed.

That said, Dragon Ball Z: Battle of Z is still a game for the fans and there are probably enough of them out there for this title to do well. The new concepts explored by the game have some real potential but they have not been executed as well as they should have been. Hopefully that will change because, for a serious Dragon Ball Z fan, the chaos and carnage that Battle of Z presents can be extremely fun in the right circumstances.