The smart contract war: What does it mean for me? 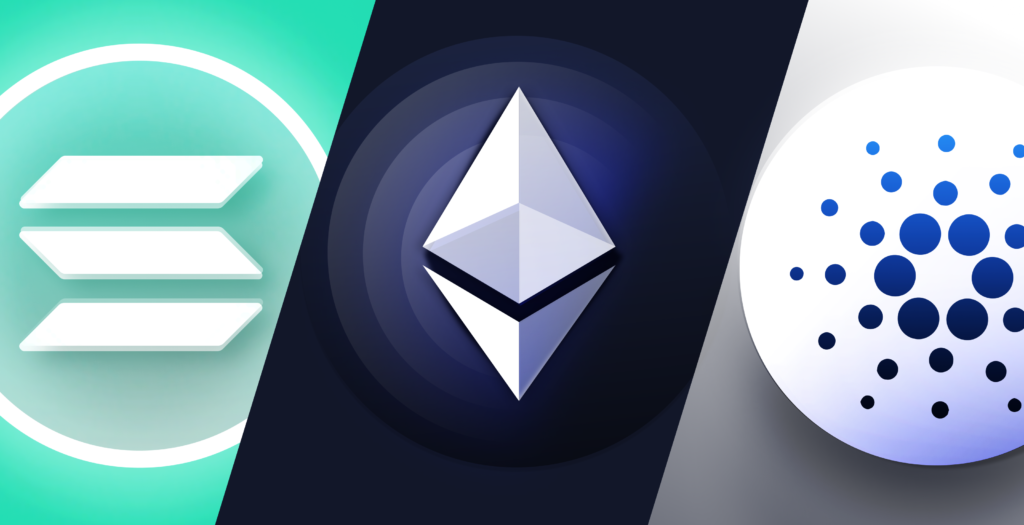 Altcoins have shown extraordinary growth over the past year as more people start to adopt and understand the technology behind them. You’ve most likely heard of smart contracts and decentralised applications (DApps) being spoken about around the dinner table. Names like Ethereum, Solana, Polkadot and maybe even some lesser-known ones like Terra and Binance Coin are becoming more recognisable. But what do they really do, what sets them apart from Bitcoin and, more importantly, from each other?

What are Smart Contracts?

A smart contract refers to a computer program that lives on the blockchain. These programmes automatically run or execute specific actions when predetermined conditions are met. Think of it like putting money into a vending machine to buy something. It works like this: the seller sets out the conditions under which the item is released and the buyer pays what is required, after which the item will be released to them. This means there is no need for a third party to see if the conditions have been met or see the transaction through.

With the help of smart contracts, the blockchain network becomes a programmable platform that can host other applications — much like how apps work on your phone’s operating system. Smart contracts have become a game-changer in the cryptocurrency market and have created one of the biggest sectors in crypto, Decentralised Finance (DeFi).

The second most popular cryptocurrency after Bitcoin. Like all fiat currencies, Bitcoin’s primary use-case was to be a decentralised peer-to-peer digital cash and store of value. Ethereum was founded with the intention to be much more than simply a medium of exchange or a store of value. Below are some of the major advantages of Ethereum:


Even though Ethereum is the world’s most popular smart contract platform, many have pointed out flaws in its armour. Several of these flaws include poor transaction speeds as a result of congestion, high fees, as well as significant power usage. While the Ethereum 2 upgrade is set to tackle these issues, many Ethereum competitors have arrived on the scene to solve these issues and steal Ethereum’s market dominance.

Who are Ethereum’s competitors?

Blockchains are constantly evolving and improving as each new blockchain tries to solve the problems of the other. This has started a race to see which blockchain can emerge victorious as the “Ethereum Killer”. Blockchains that are trying to do just that are Solana, Binance, Cardano, Terra and Polkadot, amongst others. Let’s have a look at some of these competitors and what they have to offer.

Solana is a blockchain network that seeks to develop an ecosystem of cryptocurrency-powered products and services.

Solana differentiates itself from Ethereum’s network by providing far faster transaction times, lower fees and a programming capability that focuses on flexibility.

Binance coin (BNB) is the native cryptocurrency of the Binance network. The Binance coin was originally created as an ERC-20 token on the Ethereum network but has since moved away from this and developed its own network, The Binance Smart Chain (BSC).

While the BSC and the Solana network might offer much faster transactions and lower costs, they have to compromise to get it. The reason Ethereum is “slower” is because a decentralised network operates across thousands of nodes or computers. It, therefore, takes time for this network to reach a consensus. This is just a fancy way of saying “agreement”.

The reason the Binance network can operate at a much faster transaction speed is because it only uses 21 validators. Therefore, much like Solana, it would appear that Binance is giving up some decentralisation to bring about faster transactions.

Is decentralisation valued over transaction speeds or costs in the future?

Or do these semi-centralisation blockchains take over?

It’s important to ask these questions before investing in smart contract platforms.

Cardano is a proof-of-stake blockchain with its native cryptocurrency, ADA. It was founded by Ethereum co-founder Charles Hoskinson and aims to directly compete with the current decentralised crypto platform, Ethereum.

Cardano has long been hailed as the potential “Ethereum-killer” as it seeks to offer many of Ethereum’s most compelling capabilities, such as robust smart contracts. Cardano’s benefits include:

To understand what Polkadot is and why it’s so promising, we need to start by outlining one of the largest problems in the blockchain and crypto space right now: blockchain interoperability.

Basically it’s how blockchain networks communicate with one another.

Blockchains can’t really communicate with one another  which really limits crypto’s whole “rebuild the financial world from the ground up” narrative.

If you choose to develop on Cardano, you won’t be able to interact with the Ethereum blockchain, and thus, you lose the large ecosystem Ethereum has to offer.

Polkadot is a protocol that solves this problem by allowing unrelated blockchains to securely talk to each other so that the value and data can flow between them without any intermediary. Polkadot’s uniqueness lies in its parallel processing chains or parachains, which connect different blockchains into a single unified network. Parachains have uplifted Polkadot in the following ways:

Terra is a smart contract proof of stake blockchain which aims to revolutionise the stablecoin space. It allows participants to use their native token, LUNA, to create and redeem stablecoins pegged to the value of any Fiat currency. How Terra adds value:


How do I pick a winner?

We broke down the big players and compared them to each other. But there are so many smart contracts out there that it’s difficult to pick one that will win.

But why go through all the work of an analyst when you don’t have to?

Luckily, it’s possible to invest in a diverse selection of top-performing cryptocurrencies without having to predict which one might be the best. So rather than trying to pick that once off winner, you can simply invest in the sector, not the individual asset.

In the case of smart contracts, Revix, a Cape Town-based investment firm, have made that simple for you. Revix offers its customers access to 3 ready-made Crypto Bundles that hold the most reputable cryptocurrencies in each sector. These Bundles automatically rebalance every month to make sure your Bundle is up to date with the fast-changing world of cryptocurrencies. They’re a way to diversify your portfolio and enjoy passive investing without having to worry about actively seeking out the next individual winner. As we can see, the Revix Bundles have outperformed their sector counterparts while also producing a less volatile investment vehicle.

This proves the true power of diversified bundles.

What are these Bundles made up of?

The Top 10 Bundle is like the JSE Top40 or S&P 500 for crypto. It provides equally weighted exposure to the top 10 cryptocurrencies that make up more than 75% of the crypto market. This bundle has significantly outperformed Bitcoin over the last 12 months.

The Smart Contract Bundle provides equally weighted exposure to the top five smart contract-focused cryptocurrencies such as Ethereum, Solana and Polkadot. These cryptocurrencies allow developers to build applications on top of their blockchains, similar to how Apple builds apps on top of its iOS operating system.

The Payment Bundle provides equally weighted exposure to the top five payment-focused cryptocurrencies looking to make payments cheaper, faster and more global. These cryptos include the likes of Bitcoin, Ripple, Stellar and Litecoin.

Get R500 added to your account when you invest R5 000 or more in any Revix product and hold it for a month.

R5 000 or more in one of our investable products holding it for a month, and we will reward you with R500.