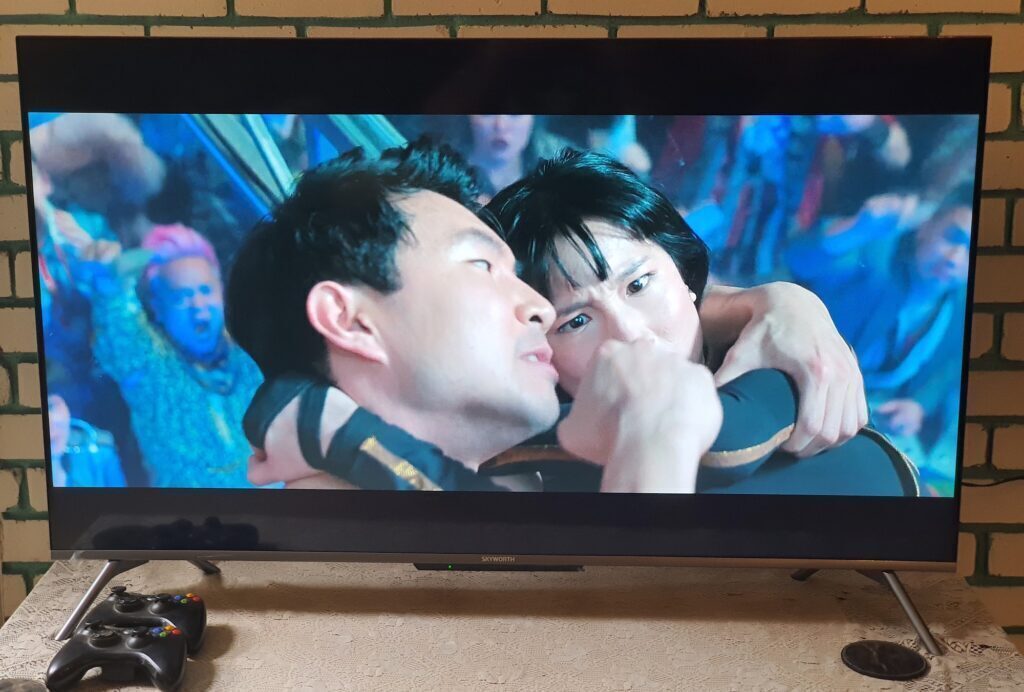 Skyworth's TV ticks enough boxes that you won't regret the purchase and is smart when you need it to be. But this isn't the Android operating system you're used to -- the lack of touch control makes setup more of a chore than you'd like.

4K TVs used to be a pricy purchase. Now you can’t turn around without tripping over a decent budget set. Skyworth’s 50SUD9300F, as the unwieldy product designation suggests, is a 50in 4K TV with a less-than-R10k price.

Skyworth’s TVs have almost all adopted Android as their operating system. The ones that don’t repack Google’s mobile OS are all ‘dumb’ TVs. You’re probably looking for something with a little smarts, though. The SUD9300F should deliver what you need — but it has its fiddly bits. Happily, things don’t really get fiddly until you’ve actually assembled this TV. This 50in Infinity Display 3.0 television set is amazingly easy to handle. It’s a breeze to unbox and put together. The panel is lightweight — almost suspiciously so. Its plastic feet screw into the base in a matter of moments. After that, you can walk it pretty much anywhere in the house. As long as your arms are wide enough to grip the sides of the set, that is. It’s that light.

Cable management is simple enough. Unfortunately, the power cable was missing from our review unit (we’re blaming whoever had it last). But an old figure-8 from an ageing PlayStation 2 took care of that little problem. The only thing left after that was to connect the various inputs, slap some batteries into the remote control, and turn the 50SUD9300F on. Oh, and then wade through the software settings, which aren’t as friendly as we would have liked. And that’s because they’re a little hard to locate. There are a set of basic TV settings, which pop up if you hit the menu key on the remote. They’re the same thing you’d find on a less intelligent set and seem to operate independently of the main OS. If you’re doing any network things, you’ll be clicking through on-screen menus in another location.

If you’ve set up an Android phone, this isn’t too much of a chore — except that there’s no handy drop-drop. So it’s off to the Settings cogwheel, where you can input the bits needed to get your Netflix on. The interface is clunky if you’re doing any sort of setup, but once that’s all sorted, life becomes easier.

Mostly. There’s the option for voice control. This is through the remote, which has a dedicated button for summoning Google’s Assistant, or the TV itself. If an always-listening TV seems a bit creepy, there’s also a physical button on the back that turns off the integrated mic. The tile-based interface handles most of the physical navigation from this point, throwing in a little pre-empting of preferences based on your watching habits.

And you’ll be pleased that you’re watching whatever it is you’re watching on the Skyworth 50SUD9300F. The 50in 4K panel is bright enough to handle most lighting situations short of carting it out into direct sunlight. But it’s also nothing really special. Images are clear, colours are well-handled without being over-enthusiastic, and audio is… okay. Maybe add a soundbar, if you’re using this in a slightly larger room.

There are no deep blacks to fall into, as you’d get from an OLED display. The 50SUD9300F retails for a little under R9,000 — a standard price-point for Skyworth. You can’t expect too much. But as long as you have the media, it’ll do the best it can with what’s onscreen. There are no fancy upscaling tricks or anything else to look forward to, but there’s loads of Android versatility. And a few irritations.

On the plus side, the 50SUD9300F handled a few digital files our standard LG workhorse was unable to process without stuttering. On the minus side, this TV eats USB drives. In all fairness, the operating system warns you that formatting a USB drive specifically for the TV will cause issues on other devices. It’s not supposed to actually do that, especially since we still couldn’t get the 50SUD9300F to recognise the drive afterward.

Skyworth’s 50SUD9300F TV set isn’t going to set any hearts on fire. It’s lightweight and capable, with a smattering of good and bad points to its credit. The Android interface is executed well enough and doesn’t present many issues once you’ve put in the setup legwork. Picture quality is more than adequate, though sound could do with a little boost. The set itself can act as a Google (or Nest) Hub, or you can disable the microphone so your corporate overlords don’t listen in to your dinner conversation. But there’s also the potential for irritation — doing anything advanced is a chore, and we still haven’t gotten over that 64GB flash drive being chewed up. We fixed it, in all fairness, but it just took too long to do that.