Huawei Nova 8 review – The start of the Huawei comeback? Huawei has put the Nova 8 in a weird position. It’s trying to be a mid-range device but lets itself down a little in key areas like battery performance. That, together with the lack of convenient features like Google services, makes it rather difficult to recommend the Nova 8 at this asking price. Maybe when it’s on special or if the Redmi Note 10 Pro is out of stock.

It has become increasingly difficult for smartphone manufacturers to set their offerings apart from the rest. This is true regardless of price point. The manufacturing processes and implementation of features in budget smartphones are increasing to the point where, in some cases, it’s difficult to tell which market segment a device is supposed to fit in based on specs alone.

We recently got our hands on a few of Huawei’s latest range of devices. Kicking off the new ‘Nova’ series is the Nova 8. On paper, just looking at the device’s specs, you’d have a hard time definitively saying whether this should be a budget or mid-range smartphone.

It’s Google but from Wish.com

Let’s get this out of the way from the start, none of the Nova series phones will have Google services. We haven’t seen Google services on a Huawei device since 2019 and it doesn’t look like they’re coming back any time soon. Even if they do, we don’t think Huawei will want to throw away all the time and money it’s spent on developing its own Harmony OS.

That being said, these devices are still running the open-source version of Android, so your experience isn’t going to be too different from other smartphones. But if you can’t go without things like Gmail, the Play Store or Google Maps, this isn’t the phone for you.

That’s not to say Huawei can’t offer anything to fill those gaps, it does. Whether or not you’re open to trying something new and how much time and effort you’re willing to spend finding decent app alternatives, is up to you. You’ll find Petal in place of Google for most things. Petal search and Petal Maps are the replacements for the search engine and navigation.

Huawei’s App Gallery offerings are surprisingly robust. There were a few of the more popular apps that you won’t find directly in the App Gallery. If you search for them, you’ll be redirected to a third-party site like apkpure.com where you’ll need to download and install them yourself. These included WhatsApp, Instagram, Facebook and Twitter.

The one thing we were strongly against is the absolute mess of apps you’ll find on the home screen right after you’ve switched the phone on for the first time. Some of these are pre-installed and others are just heavy suggestions that when tapped on, will begin their download from the App Gallery. We had to spend the better part of an hour uninstalling all of that. Not cool, Huawei.

Look and feel – a redeeming factor

The feel of a smartphone in your hand is important, it’s how you use them 99% of the time. The Nova 8 felt pretty great in our hand. That’s thanks in part to the contouring of the edges on the front and back. We also suspect it has something to do with the relatively small battery as well.

You only get one choice of colourway but depending on how you hold the device it can have a different look. The so-called blush gold might not be for everyone though, luckily you can cover it up with a skin or opaque cover. If it is your thing, the included transparent cover will suit you just fine. Or live on the edge and go caseless like an iPhone user, it’s up to you. 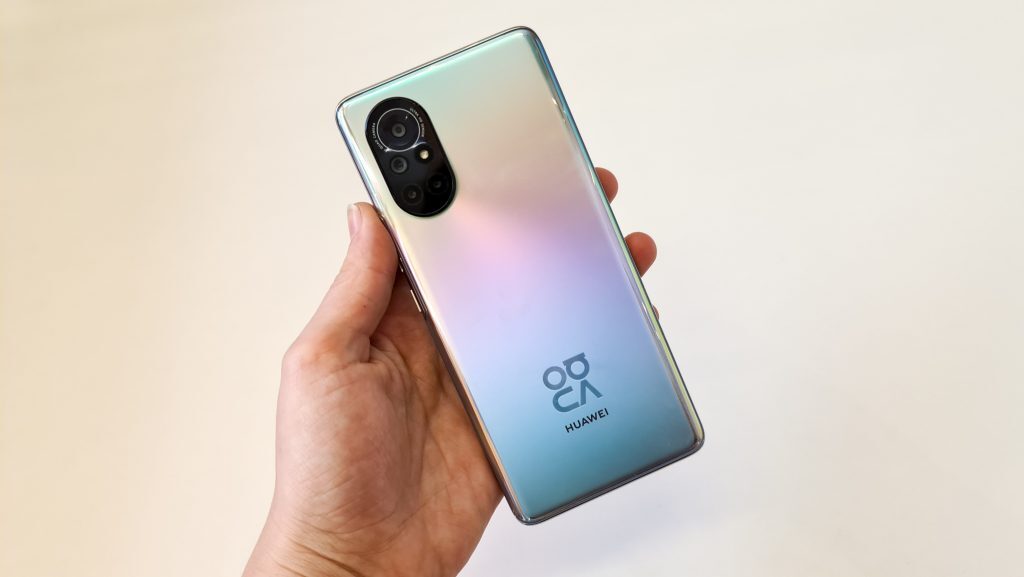 The Nova 8 sports a decent looking OLED panel that supports HDR10 content and a 90Hz refresh rate. At this price, the slightly higher 120Hz refresh rate is expected but the average consumer will struggle to tell the difference between that and the 90Hz you get here. Shipping this one with 120Hz doesn’t leave the company any room for the slightly higher priced Nova 9, but they didn’t have to make that our problem.

Behind the display, you get a decent 8GB of RAM and 128GB of storage. For general use, the Kirin 820E SoC will get the job done but don’t expect crazy multitasking or high-intensity computing and rendering.

Huawei has put a bit of effort into their camera game with this one. The main 64MP sensor was surprisingly effective at capturing images without the over-saturation that you usually find on mid-range devices that try to overcompensate for the underperforming sensor. One thing we did notice when we went pixel peeping is the blurring of some more difficult edges, like pet hair. An 8MP ultra-wide, a 2MP depth and a 2MP macro sensor round up the quad-camera setup. Selfies are shot with the front-facing 32MP camera. We’ve definitely used worse cameras at this price point, but then we’ve also used better.

We feel a little let down when it comes to battery. While you do get Huawei’s 66W SuperCharge charging which gets you 100% in 35 mins, that’s because it’s only filling a 3800mAh battery which is terribly small when compared to similarly priced devices. Almost as if to try to make up for that, 5W reverse charging is also available. After 6-8hrs of screen time a day we found we needed a quick charge towards the end to carry us through. Your results may vary depending on your usage but keep the charger close by in case.

Huawei has put the Nova 8 in a weird position. It’s trying to be a mid-range device but lets itself down a little in key areas like battery performance. That, together with the lack of convenient features like Google services, makes it rather difficult to recommend the Nova 8 at this asking price. Maybe when it’s on special or if the Redmi Note 10 Pro is out of stock. Asus announces a whole slew of new devices, some of which are headed to SA