Apple Watch SE – This is as SE as it gets Odds are that, if you’re considering an Apple Watch SE, then you’ve never owned one of Apple’s connects watches before. Perhaps its your first smartwatch, or maybe you owned a much older version of the Watch and have decided that you don’t need all the oxygen-measuring tech inside the Watch Series 6.

Whatever your reason, you’re probably attracted by the Watch SE’s more affordable price tag. It starts at R6,500 and goes all the way up to R8,200 for the cellular version — which isn’t the sort of thing you can just impulse buy but by Apple standards, it’s a bargain. The question is how much of one: is the reduced price worth the reduced feature set? Read on to find out. Perhaps one of Apple’s smartest moves is making the SE practically indistinguishable from its Series 6 sibling. It comes in the same two sizes, 40mm and 44mm, and while aluminium is the only option when it comes to the case material, the three colours it comes in – space grey, silver and gold – are all available on the Series 6 as well.

What will give it away is the lack of an always-on display, but for many it’ll take a lot more than a glance to know you’ve taken the cheaper option. It doesn’t feel like that either, even with the standard Sport Loop attached, and you can always level it up with a slightly fancier strap if you start to feel inferior next to your Series 6-sporting mates.

In use it’s identical too. On the side you’ll find the digital crown, which is used to scroll through menus, zoom in and out of the app grid, and go back to the main watch-face screen. Beneath that there’s another button used mainly to show the Dock, which displays your favourite or recently-used apps. A double click also activates Apple Pay, although the SE also has Express Mode, which allows you to tap in and out of various public transport networks around the world without having to press a button first. Handy. Setting up an Apple Watch SE is a masterclass in simplicity. Once it’s strapped on you can use the Watch iOS app to choose which notifications you want to have delivered to your wrist. You can switch them on and off app-by-app, so you can make sure less urgent stuff stays on your phone and doesn’t use up precious battery life unnecessarily.

The Watch SE might not do electrocardiograms or measure the amount of oxygen in your blood at any given time, but it still has an optical heart rate monitor, which matched the one in a Garmin Forerunner 45 almost beat-for-beat on our test runs. It can also alert you to irregular rhythms or an unusually low or high heart rate, although presumably the feeling of it beating out of your chest would do the same.

Like the Series 6 it also has an always-on altimeter onboard, which makes GPS-based activity tracking that little bit more accurate, but isn’t going to change the world for the average pavement pounder. You get all the usual day-to-day movement monitoring and reminders too, but they’re easy to turn off if you find it annoying to be told to stand up all the time. It also has Fall Detection and Noise Monitoring, which you won’t get by opting for the Series 3.

Perhaps the most significant difference between the SE and the Series 6 – aside from the price – is the lack of an always-on display. About 99 times out of 100 it’ll wake up when you want it to, and it’s practically instantaneous, but there will be occasions when you’ll need to give it a tap or repeat the wrist-flicking action in an overly pronounced way to make sure it gets the message.

In terms of size and sharpness, though, the screens are identical: a Retina OLED with 368×448 resolution on our 44mm review sample, or a slightly lower 324×394 on the 40mm version. That means the various faces available look great – even the analogue-aping ones with their tiny second markers and various sub-dials. 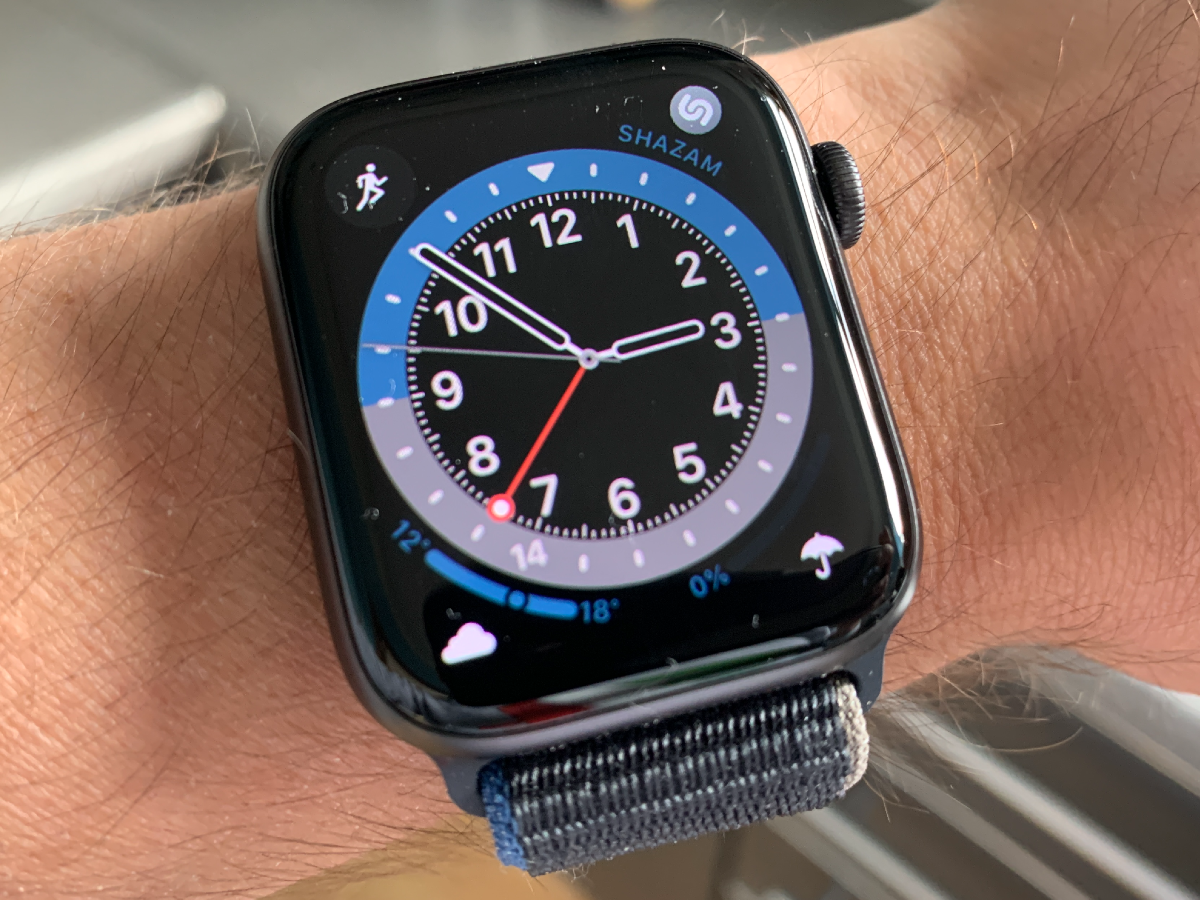 Apple’s WatchOS has remained largely unchanged since it was introduced in 2015: a press of the digital crown takes you to a grid of little app blobs (although you can change it to a list to scroll through if you struggle to remember which icon’s which).

It can take a little getting used to, especially if you’re used to just swiping your way around iOS, but a lot of navigation can be done just using the touchscreen. It’s surprisingly accurate given the size, although some functions – ending workouts in particular – feel like they’d be better being handled by a single button-press instead.

Swiping down on the face screen takes you to a Notification Centre, while swiping up lets you check how much battery is left, eject any water inside, and quickly toggle things such as airplane or theatre mode, the latter of which mutes any notifications and stops the screen from illuminating when you raise your wrist. How very considerate.

Although not exclusive to the SE or Series 6, sleep tracking is new to WatchOS 7. It’s pretty basic, showing only how much time you spent in the land of nod – no breakdown into light, deep or REM sleep, which some much cheaper watches do offer. The heartbeat-style haptic alarm is effective though, and could come in particularly useful if you share your bed with someone who doesn’t have to get up quite so early.

There are multiple sleep-tracking Watch apps available that’ll give you just that – and that’s one of the Apple Watch’s greatest strengths. There are apps to add all kinds of functionality, from hydration reminders to puppy training, so it can be pretty much whatever you want it to be. With its 64-bit dual-core S5 processor and W3 wireless chip, the engine inside is practically identical to the Watch Series 5, so the SE ticks over as smoothly as you might imagine. There’s no sign of any delay under your finger and apps launch instantly – even the live view from your iPhone’s camera shows barely any lag.

It’s often sensible to be sceptical about the numbers manufacturers quote when it comes to battery life but, if anything, Apple has low-balled its 18-hour estimate for the SE – and quite significantly. Of course, its marketing department seems to think everybody kite-surfs to work and climbs a mountain on their lunch break, so that perhaps isn’t entirely surprising.

From taking the SE off of its magnetic charging puck for the first time to it complaining about being down to 10% battery took nearly 48 hours – and that included a 30-minute run, mucking about with faces and complications (both of which now offer more options), and plenty of notifications, with the screen brightness set at two-thirds of maximum. It wasn’t just beginner’s luck either; we managed to repeat that cycle three times over the first week. Of course, this will vary from person to person, and heavier use will obviously drain it faster, but the average wearer should have no trouble beating Apple’s quoted numbers.

It charges more quickly than expected too: from 6% to 100% in about two hours. If you’re wearing it to bed, that means you should be able to find time during the day to charge it fairly easily, although that will mess with the standard overnight charging routine. With no plug adaptor in the box, you might’ve had to change that anyway. The Watch SE is a more affordable edition of the company’s wristwear but that term’s very much relative when it comes to Apple kit. It’s still a luxury product, even if it’s ‘cheaper’. Nothing’s particularly essential to your life, even if Apple desperately wants that to be the case. The health and wellness features make a big play at being essential, if nothing else. If you’re keen on making some wearable tech essential, springing for the full-on Series 6 and its extra bits will go a long way towards that goal.

An always-on display would make the SE better but something had to be done to keep that price down. If you’re looking to see iPhone messages and other notifications on your wrist, the Watch SE does it better than any non-iOS rival and if you’re upgrading from the Series 3 or earlier, it’s a no-brainer. It’s not likely to set the world on fire but if you’re looking to take the plunge into wearables at last, this might be just what you’re looking for.