When updates to iPhones and iPads are big, you can see them immediately. A thinner bezel here, an extra camera there. But when iOS gets major improvements (and it doesn’t at every WWDC) they’re tougher to spot. With iOS 11 Apple’s basically given its mobile operating system the equivalent of an edge-to-edge display and impossibly thin chassis.

All you really need to know is that, like the updated and forthcoming macOS High Sierra for desktops and laptops, iOS 11 is jam packed with new features to make your iPad and iPhone more potent, more user-friendly and just generally better. These are the things we’re most excited about.

Digital assistants responding with robotic voices is fun and all, but Apple thinks we want more naturally sounding minions. So Siri gets new male and female voices (for US English, at least, we can’t yet vouch for the rest). Siri can also translate English Chinese, French, German, Italian or Spanish, and thanks to new “on-device learning”, should also be able to provide smarter, more informed and ultimately more useful assistance.

It’ll pay attention to how you use it, and Apple apps like Safari, Mail and Messages, and will use these insights to let you do more things with a voice command, or offer better typing suggestions when you’re creating a calendar event. And, while the information gleaned will be shared across your iDevices, Apple promises it won’t be listening. Maps also gets an update, with new indoor maps of major airports, malls and speed-limit info for roads… though how much of this will show up in South Africa is anyone’s guess. 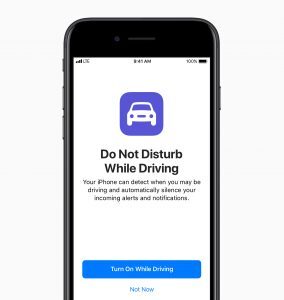 Look, we know you’re not one of those people we see in traffic texting furiously (or playing Candy Crush). But those people walk (and drive) among us, and Apple’s trying to make sure if they’re iPhone users they keep their eyes where they should be — on the road — instead. Like the existing Do Not Disturb feature, iOS 11’s new Do Not Disturb While Driving feature will recognise when you’re behind the wheel (using Bluetooth and Wi-Fi) and offer to turn your screen off completely and stop all non-pertinent notifications.

Folk who message you while you’re driving will get an automatic reply to that effect, but you can set it up so that anyone replying to that message with “urgent” will see the pressing message show up anyway. We suspect it’ll turn out that very few of the messages we get while driving are actually sufficiently urgent to warrant a red-light response.

If you ask us, the App Store is long overdue for a redesign. You didn’t? Well, we’ll tell you anyway. But we don’t have to, because Apple’s clearly taken heed of our strongly worded email and given the App Store more than merely a lick of paint.

There are now three tabs, Games, Apps and one called Today that, you guessed it, will be updated daily.  In each tab there’s the option to drill down to in-depth features and interviews with app developers, App Store editor picks, and tips and tricks for your favourite apps and games.

Swipe up on your iPad or iPhone once you’ve installed iOS 11 and you’ll see Control Center has also gotten plenty of attention from the iOS team. For starters, it’s prettier, but it’s also more useful than its predecessor.

Previously, buttons and sliders were limited to taps and drags, but now with 3D Touch you can dig deeper. Meaning no more hard pressing on the Settings icon to get to Wi-Fi or Bluetooth quickly. Hurray!

Apple Music will now let users create profiles and share playlists with other users, or see what their friends are listening to in realtime… unless they opt to turn that feature off and keep their Phantom of the Opera obsession to themselves.

And where Apple Pay is supported (not here in South Africa, sadly) users will be able to send each other payments. And in those regions, iMessage can pop up a link to Apple Pay right there when another Apple user asks you for a loan, or your share of last night’s dinner.

There’s a new version of AirPlay coming with iOS 11 and it’s going to make multi-room audio and control of it possible through Control Center, the Home app or using Siri. Lots of the big name sin home audio — including Dynaudio, Bang & Olufsen, Bowers & Wilkins and Bose — have committed to supporting AirPlay 2 already, and if you’ve got an Apple TV you’ll be able to share the audio from that to any compatible speaker, too. Naturally it’ll work brilliantly with Apple’s new Siri-powered HomePod speaker it also showed off at WWDC.

Ever wanted to create a Boomerang but worried doing so means indirectly contributing to Mark Zuckerberg’s hoodie collection? Nope, us neither. But if that ever happens thanks to iOS 11 we can create Boomerang-like “Bounce” pictures, or looping ones. More importantly, Live Photos finally have a real purpose thanks to the option to pic the best still from one (previously you were stuck with the one from the moment you hit the shutter button).

A new Long Exposure filter will also attempt to capture a Live Photo’s sense of movement in a single still, and Memories is getting an update, too. Now it’ll automatically collect photos together using more smart categories and will optimise the results according to whether you’re viewing them in portrait or landscape orientation.

Running out of space on your iPhone 7 or 7 Plus? Well, iOS 11 might have the solution. A new technology called High Efficient Image File Format (HEIF) compresses the file size of photos you take by as much as half, while still remaining compatible with anything else that can read image files.

iOS 11 looks set to bring great new features to the iPhone, but its offerings for iPad users are even more impressive. A new Mac-like customisable dock makes getting to your most-used apps on any screen cinch, there’s a refreshed app switching for better multitasking, and a new drag and drop option looks set to make shifting text and pictures between apps a whole lot simpler. If you can’t wait to fiddle with iOS 11 head over to the Apple Developers site, or wait for the public beta that’ll be out in the next couple of weeks. The consumer-ready version will rollout this September as it usually does, and as usual, it’ll be a free update. What’ll you need to run it? An iPhone 5s or better, or an iPad Air or Pro, or an iPad mini 2 or newer, 5th gen iPad, or 6th gen iPod Touch.