Trials Fusion – Getting up in the air 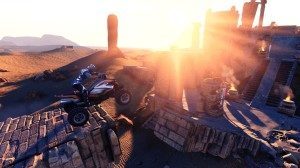 A ‘trial’ is usually defined as something that tests the qualities of something else, usually with the aim of finding out just what it (whatever it happens to be) is made of. Or it’s a criminal proceeding used to determine guilt but that’s not relevant here so we’re discarding it. The Trials series of games from developer RedLynx have always tested the mettle and patience of gamers and the latest outing by the motorcycle skill title is no exception.

We’ve already seen Trials, Trials HD (which is the first game with a new coat of paint) and Trials Evolution frustrate gamers to the point of controller-destruction, now comes Trials Fusion and a whole new setting. What has remained unchanged in Ubisoft and RedLynx’s game is the patience, skill and more patience needed to wholly master this game – the quantities required are surprisingly large considering just how simple Trials is to play.

Playing the new and futuristic Trials Fusion is the same as it ever was. You’re given a motorcycle, starting with the lowest-tier bike, and sent out into the world to make your fortune. Or at least make it to the end of the track while making as few mistakes as possible. In order to do this, players need to control their cycles with exquisite precision and they’ve got just an accelerator, brake and some control over the rider’s position to do it. This is an easy enough proposition in the early stages of play but as Fusion progresses, hitting a jump or landing on a point just so becomes ever more difficult. 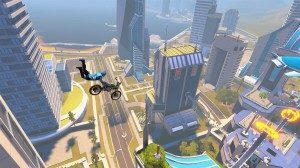 This is Fusion‘s selling point and perhaps its downfall as well. Some players will find themselves draw to the constant trial and error (see what we did there), others will enjoy themselves right up to the point where the games gets complicated and the learning curve skyrockets into the stratosphere and then quit in frustration. Of course, Fusion does ensure that you never need to get to that point by throwing in a whole of other features to keep the easily-frustrated amused.

Multiplayer mode, with a couch-mode available as well as online bouts, is one way to stave off the rage-smash that a single box in the later levels of Fusion can induce. Going head to head with other human players in actual races is a great way to refine skills that might be a bit rusty or still in the embryonic stages.

There’s also an avenue for the creative in you with Trials Fusion‘s track editor. You can either spend some time tooling around with the editor itself in the Create option, creating your own playgrounds – which is a pretty daunting exercise on its own. RedLynx do have a series of tutorial videos available online for the serious creators though, which should take out some of the sting. Otherwise, it’s perfectly possible to just amuse yourself playing all of the user-created tracks that are available online without worrying about scores and objectives. 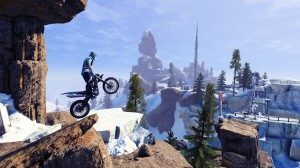 Still, if Fusion‘s gameplay acts on you the same way it did us, eventually you’ll be drawn back to the main game the same way you feel compelled to poke at a sore tooth with your tongue. If that is the case, RedLynx do have some new features in store. New skill games, a trick-based mode and the chance to zoom around the game world on quad-bikes while wearing a squirrel head are just a few of these and the trick mode is perhaps the highlight here. Trials veterans can test their skills by trying to cross a track while executing a Triple-Backflip Underdog without landing their rider squarely on his be-helmeted melon, controlling the bike’s orientation with the left stick on the controller while making the rider flip out with the right.

The tricks mode isn’t as extensive as we would have liked but it’s there and it will almost certainly be expanded on in the near future. It’s also very well put together, being challenging enough to hold your attention without being so hard as to make you quit before you’ve even started.

Trials Fusion is a blend of the old and the new and it’s very nearly the perfect blend. It has its moments of frustration but these are made up for when you finally manage to kill that near-vertical ascent without making a single error. It still isn’t for everyone but it has certainly got a broader appeal this time around.