By MarcéFebruary 15, 2022No Comments6 Mins Read The Nintendo Switch OLED is an a’ight upgrade for an already-good console, though. It brings with it a stunning new display, louder speakers and a stand that actually does what it’s supposed to. If you’ve been holding off on buying a Switch until now, we think the OLED model is well worth the R8,500 you’ll pay.

Many were sceptical when the company decided to launch the OG Switch console. But four and a half years and nearly 90 million shifted units later, Nintendo’s masterstroke of a hybrid console has returned its maker to the top. Of course, there’s no denying that the Switch is starting to show its age a bit. I mean, just look at what the competitors are doing.

No doubt fans were expecting a Switch Pro console to turn up soon-ish. When it announced its first significant Switch revision since 2017, it was not the Switch Pro we were expecting. 4K upscaling on the TV? Forget it. If we’re talking raw power, the new Nintendo Switch OLED is entirely unchanged. 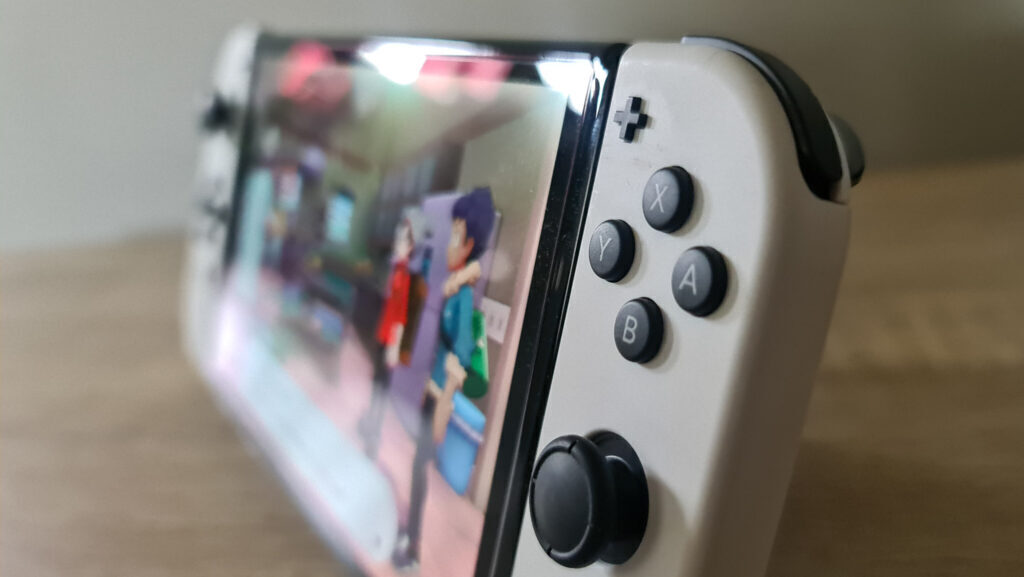 It brings something new to the party, though — that spectacular OLED display. And don’t forget the handful of other hardware tweaks that honestly should have been there from the beginning.

But if you’re in the market for a Switch console in 2022, the R1,000 markup for the OLED version kinda makes sense. If you’d be upgrading from a previous version then, well, you might want to rethink that.

Direct your glance away from the (rather fetching) white Joy-Con controllers, and the console looks nearly identical to the original. It’s a touch-display tablet capable of being utilised with Joy-Con’s nestled in the sides, in tabletop mode with controllers detached, or docked to a larger display.

If you’re after that last mode, the Switch simply slides into a slightly redesigned but functionally identical dock. This connects to the TV via HDMI before the picture near-instantly transfers from the handheld to the big screen. That’s what the Nintendo Switch does so well, even four years on. As a handheld console, however, the OLED Switch shows its upgrades well. That’s primarily thanks to that wonderfully bright display it’s packing.

Firstly, the display size is upped from 6.2in to 7in – so there’s a considerable bezel trim. It’s a slight increase but makes all the difference when actually using it for its purpose: playing games.

Flip the new Switch around and you’ll find the other significant upgrade: that kickstand’s been redesigned and is now actually usable. Without throwing shade: That original Switch’s kickstand was a joke. It felt like it might snap off entirely every time you went to use it. So this is a small, but exceptionally welcome upgrade. The Switch OLED’s new stylish white dock features two USB ports and your HDMI-in, but the big new addition is a built-in LAN port. If you play a lot of online games that demand a consistently strong connection, the option of going wired in TV mode should make things more reliable.

Not OLED by the blind

Now that we’ve covered the (fairly small) other upgrades to the Switch console, let’s discuss the main hardware element in the room: That wonderful OLED display.

If you’ve used a flagship smartphone (and some mid-rangers, mind you), you’ve probably experienced some OLED goodness before. The display tech allows for richer, more vibrant colours, deeper blacks and far higher contrast. That’s thanks to OLED’s capability to offer deeper blacks – which, in turn, makes colours and whites more brilliant.

It’s not surprising that Nintendo opted to launch the Switch OLED alongside Metroid Dread, in which the inky blacks of the darker areas you explore look gorgeous alongside bright orange lava and the neon lights of the game’s creepy alien space bases. We fired up Switch classics like Super Mario Odyssey and The Legend of Zelda: Breath of the Wild and there’s no doubt that on an OLED display their already vivid worlds pop even more. It’s not all good news, though. Nintendo might have increased the size of the Switch’s display, but the resolution in handheld mode remains at 1280×720. When we first heard this we feared that a bigger screen with the same 720p resolution would result in a slightly jaggier, more pixelated image. It’s not really noticeable unless you’re trying to look for it, and it helps that Nintendo’s games are usually more about art style than graphical fidelity anyway, but there’s no doubt that the new Switch exposes how outdated Switch games – incredibly pretty though many of them are – are beginning to look. Even if 4K on the TV was too big of an ask this time around, we do wish Nintendo had managed to give the handheld display a bit of a resolution boost.

The Switch OLED’s speakers feature what Nintendo calls “enhanced audio”, and they’re definitely noticeably louder than before, which is great if you can’t be bothered reaching for headphones. It’s worth remembering, though, that Nintendo recently decided that – after four years of forcing us to use wired headphones or a dongle – Bluetooth headphones magically work with the Switch now. In terms of listening to games, Switch owners have never had it so good.

Performance-wise the Switch OLED isn’t doing anything differently. The copy and pasted innards mean that if you do the majority of your Switch gaming on the TV, you absolutely do not need to upgrade to the Switch OLED. There is no point. Games will look exactly the same. And if you really want white Joy-Cons or that new dock, they’ll both be available to buy separately anyway. The handheld-first crowd will have to decide how much they value the benefits of OLED. All we’ll say on that is that our Switch Lite’s screen suddenly looks a teeny bit dull next to the OLED’s.

Battery life as quoted by Nintendo remains a very unspecific 4.5-9 hours. It really depends on your usage and a few other factors. That OLED is thirsty, though — so be sure to pack the bundled USB-C charger wherever you go. It’s important to judge the Switch OLED for what it is, rather than what it isn’t. It is Nintendo’s flagship console that features a few key upgrades from its predecessor. It’s not the 4K 120Hz Switch Pro gaming beast many of us had in mind, however.

It’s an a’ight upgrade for an already-good console. It brings with it a stunning new display, louder speakers and a stand that actually does what it’s supposed to. If you’ve been holding off on buying a Switch until now, we think the OLED model is a decent buy at R8,500. just keep in mind that you can buy an Xbox Series S for less, though.