2021 has been a bumper year for tech, despite setbacks like the ongoing semiconductor shortage and, you know, a genuine pandemic. Working at stuff I’ve had the pleasure of toying with a few interesting gadgets and gizmos, and here are my favourites. 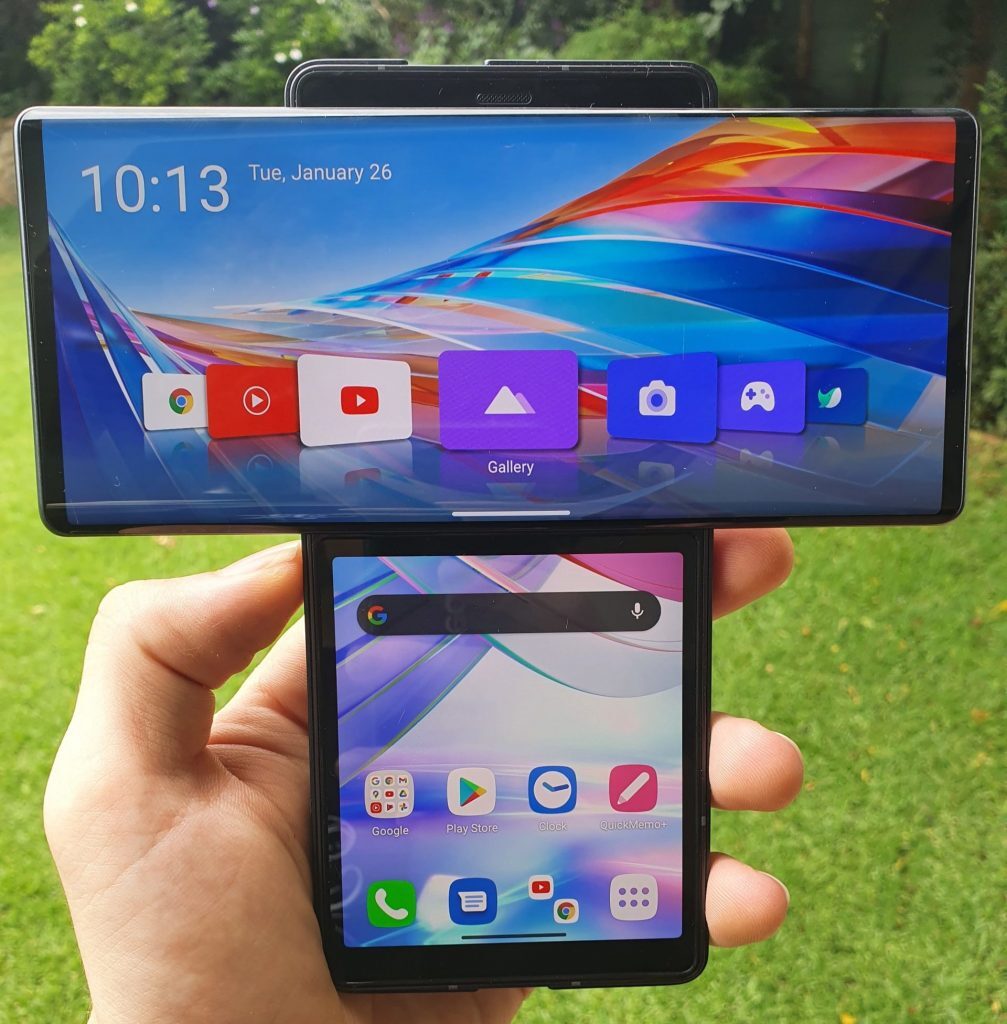 Now, let’s get something out of the way right now. I am not saying that LGs final phone is one of the best of 2021. Far from it. I am saying I had an absolutely brilliant time with it.

For my first project at Stuff (in essence, a test) I was given the Wing to review. So there’s some sentimentality here as well if I’m being honest. You can find my review here.

It’s a really interesting take on a dual-screen phone. Unlike the Galaxy Fold or Microsoft Surface Duo, LG’s double display phone has one main screen and a smaller auxiliary screen. The real fun here is that the phone opens into a T shape to reveal the auxiliary screen. This lets you do some dual-screen multitasking and use the camera with a digital gimbal.

You might be thinking that this sounds like more of a gimmick than a revolutionary design choice, and you’d be right.

But it’s definitely got some interesting uses. For example, multitasking is really fun. You can open a timer on the small screen and a recipe on the other, or a game on the main screen and a map on the other. Some games and apps actually have functionality built in.

Again, this wasn’t revolutionary, but I had a really great time with the Wing, so it makes my list. Don’t go looking for it though. You probably won’t find it. This was another little device I got to play with earlier this year, around June. It’s a cup-sized projector with wireless casting and HDMI functionality and… that’s about it. There’s not a whole lot to say, but man is it an excellent little projector. Asus makes good tech.

You can find my full review over here, but as a basic rundown, the Latte L1 is a portable LED projector boasting a 720p display and 300 lumens worth of light output. It won’t outmatch a good TV, but it doesn’t have to. Here’s why.

You know what’s freaking awesome? Watching a movie on your ceiling while you’re laying in bed. Turning your desk wall into a home cinema. That’s awesome. I had an absolutely wild time with it. That might have been because I was watching Dragon Ball and I’m biased af, but still.

And as far as portable projectors go, 300 lumens is really solid. Plus, it doubles as a pretty adequate bluetooth speaker. Bonus. 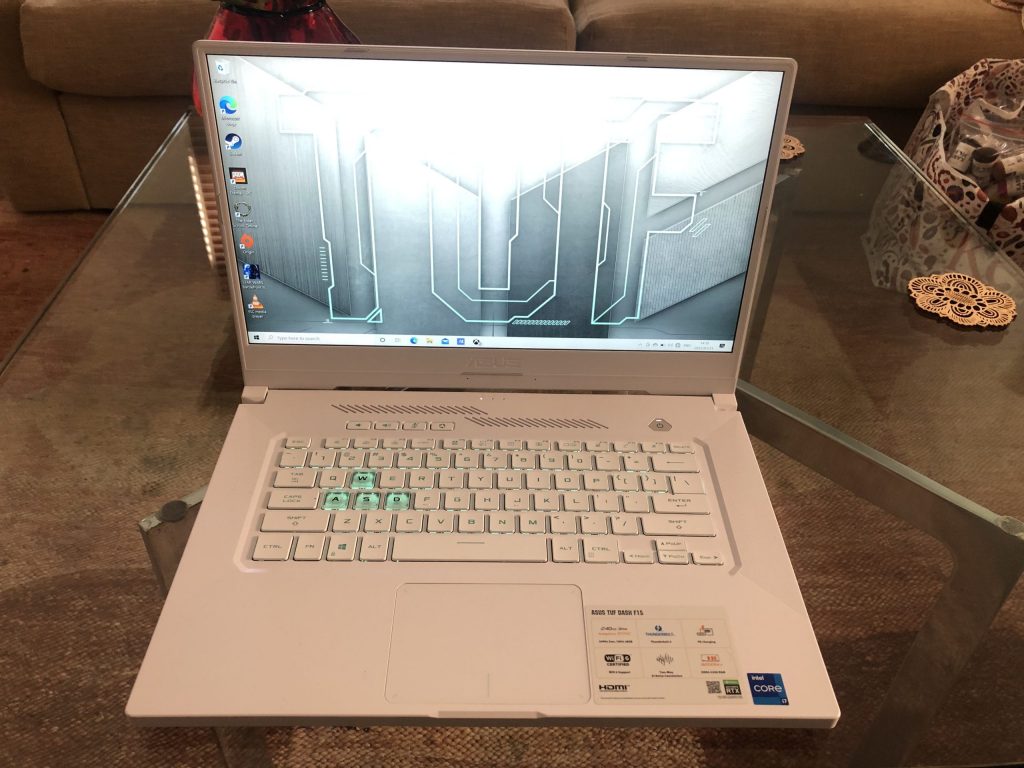 It’s a gaming laptop at heart, running even the most intensive games at a buttery 60FPS thanks to its GPU, but it’s also perfect for everyday work, design, music production and more.

The ASUS TUF Dash F15 is an impressive piece of kit. It’s got some truly stellar hardware, including a pretty beefy RTX 3060 GPU, making it one of the most affordable machines to hold an RTX 30 chip. The upgardability is a plus, and there are some nifty features packed into the machine too. The only slight letdown is the CPU, which could be better considering the price of admission here. Still, there are few things you won’t be able to do with this laptop. All of this wrapped up in a stylishly subtle design makes the Asus TUF Dash F15 a brilliant addition to the TUF line. Like I said above, Asus makes good tech. Ignore the mouthful of a name. The Air 2s are an amazing set of ANC wireless earbuds with an almost shockingly low price: R2,000. They’re probably your best shot at Airpod Pros without having to pay Apple prices for them.

Sound quality is truly superb on these. By-and-large they’re very well balanced, but if you find them a little bassy or want to push the mids while you’re listening to Rush you can do that from the accompanying app, which is the real standout here. Through the app you have access to an 8-band equalizer that lets you customise the hell out of your sound profile. You can save presets you like, or make use of some of the ‘Made by’ stock presets created by musicians who endorse these buds. In the app you can also mess around with the noise cancellation and ‘hear through’ options.

With brilliant ANC and high-quality audio, I’d happily recommend these to just about anyone. Throw in solid presentation and some pretty staggering customisation potential through the Soundcore app and Anker’s got itself a fantastic piece of hardware for tech-casuals and audiophiles alike. I’ve saved the best for last. If you, like me, are a guitarist interested at all in amp sims and at-home music production, Neural DSP is religion to you. As far as amp modeling goes, the folks over at Neural are on another level, and even the pros know it. Neural’s Archetype series offers amps modeled after modern guitar Gods’ signature sounds, featuring artists such as Plini, Tosin Abasi, Corey Wong, and even guitar Jesus himself John Petrucci. Bedroom guitarists and pros alike absolutely froth for Neural’s stuff. Heck, Aaron Marshall recorded all of the guitars on Intervals’ 2020 album Circadian with a Neural plugin.

Safe to say I’m a diehard Neural fan, having picked up Archetype Plini early last year. I’m also a massive Polyphia fan. So you might be able to imagine my excitement when Neural Paired up with the band’s lead guitarist and producer, Tim Henson, to make his own Archetype.

It’s a little hard to explain to the uninitiated just how good this plugin is. It packs three amp heads (Nylon, rhythm and lead), boost, compressor and overdrive pre-effects, all your chorus, delay and reverb options, a fully customisable cab, and a 9 band equaliser. All of this is already insane, but for me the real standout is a freaking multi-voicer. If the name isn’t self-explanatory enough, this (in a nutshell) lets your guitar sound like two, three, or four guitars at once. Have a look at the release video and you’ll hear what I mean.


Plus, Neural’s plugins work through standalone apps, so you don’t even need to run them through a DAW if you just want to noodle for a bit or jam with your mates. They’re truly unbeatable, and as far as I’m concerned Tim’s is the best one yet.