The Samsung M5 smart monitor is a touch confusing. At first, we didn’t really see where it sat in the market. At first glance, it looks like tries to be too many things at once but does nothing well enough for anything to be considered a standout feature. It’s only after we spent some time with it, exploring the different features, that could we see how this might be the first step in the direction of a world where PC monitors and TVs are one and the same.

Usually, a monitor review, like this one, is focused on the technical specs of the thing in question. How many times does it refresh per second? The size, resolution and response time? All that good stuff. We’ll touch on that but there’s a little more to this monitor than that. Let’s dive right in.

Let’s start with what makes this display unique, the smart functions. This isn’t the first monitor to offer wireless screen mirroring and it won’t be the last but how many other monitors do you know of that can remotely access a PC? Not via Bluetooth, an attached PC or other near-field methods, but over the internet with Microsoft Remote Terminal Services. This way, the PC you’re connecting to does all the heavy processing and you’re just streaming the video feed and keyboard and mouse inputs to the display. So it should theoretically result in a more responsive experience.

If you’re using Microsoft 365 you can sign in to your account and run Word, Excel and PowerPoint right from your display. If that tickles your fancy and you want to try it out we’re going to suggest hooking up a Bluetooth keyboard and mouse because you don’t know pain like navigating Word with a TV remote. Although, you’ll need to make sure it’s the combo because the 24in M5 that we have only has one USB port around the back. 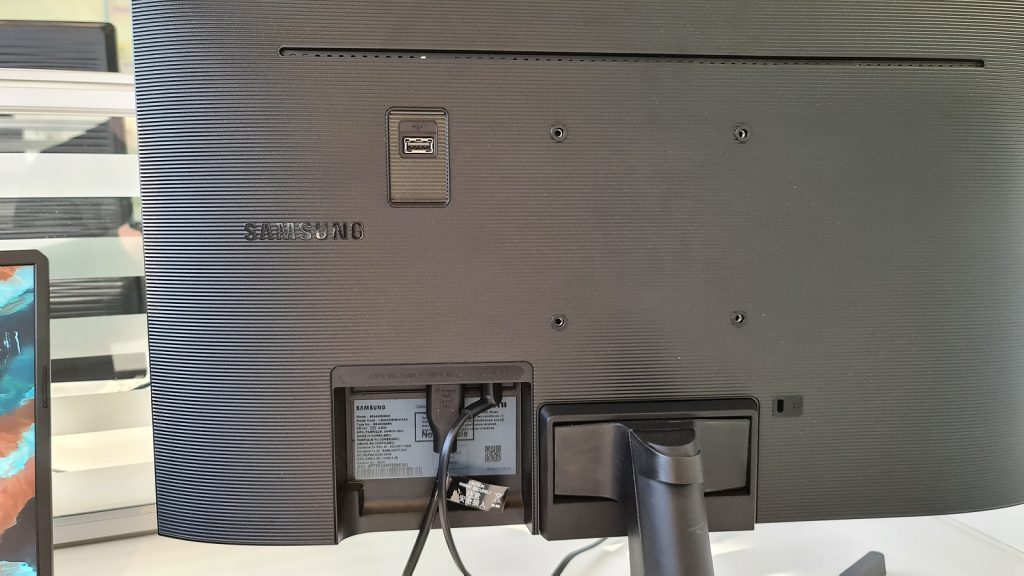 Don’t hit it too hard though On the traditional side of things, it has all the normal features you would expect from a computer monitor. If you just need to use the M5 as a standard display or second screen for your laptop you can simply plug in with the included HDMI cable and forget about the rest. It has two HDMI ports in fact, and one of them even supports ARC.

So you could hook up a soundbar or ARC compatible audio system as well if you wanted. And you’re going to want to if your only other option is the built-in speakers, because they’re not great. But when have built-in display speakers ever been anything more than just ‘okay’?

The unfortunate side of including all these features and gearing the M5 toward productivity is that gamers and creatives miss out. This is only suitable as a gaming display if it’s your only option. We received the 24in 1920x1080p model and while 24in and 1080p are still the default for a lot of PC gamers, the 60Hz refresh rate and 14ms response time are not.

Samsung has also made the M5 in 27in and 32in sizes with the same 1080p resolution. Need more than that and you’ll need to look at the M7 which boasts 4K across the 32in panel.

If you’re a creative professional looking for your next display then keep looking. The use of an IPS panel means the picture quality isn’t terrible, even when viewing it from an angle. But the colour gamut coverage leaves a lot to be desired and with a max brightness of 250 nits (cd/m²), you’re not getting any HDR support.

TVs can be small too

It’s not all about the monitor though, this one is half TV as well. From the TV side, you’re getting those two HDMI ports, one with ARC support for a potential soundbar or other ARC capable device, and a remote. On that remote, you’ll notice it has a Netflix button — among others — and you don’t see that too often on monitor remotes. Powering the Smart TV experience is Samsung’s Tizen OS. The Linux-based OS allows you to load apps like you would on any other Samsung TV. It even comes with a few preloaded. On the outside, you’ll find a bit more flimsy plastic than you’d expect when paying close to R5,000 for a 24in 1080p display. This isn’t winning any design awards. The other letdown is that the included stand doesn’t allow for much in the way of tilt or swivel action. It does have VESA support though, so you can mount it to a monitor arm if you’d like, which is nice.

Unfortunately, as with many devices that are the first to try things, you end up paying a bit more for the opportunity to try the thing first. Paying R4,700 for a 24in 1080p monitor would be on the side of ludicrous if it didn’t also provide all the features it does. Considering this could be the future of displays, it might just be worth it. Just.

The Samsung M5 can be found at your nearest Samsung Store or online at digitalexperience.co.za for R4,700.