Considering just how much we loved the first pair, we’ve been anxiously waiting for news of Samsung’s upcoming Galaxy Buds 2 for a while now. While we’re certain they’ll make an appearance at the upcoming Galaxy Unpacked event, we’re always excited to get some deets early. Thanks to WinFuture (translated by Android Authority), we now know a little more about the Galaxy Buds 2.

Samsung’s best Buds for your ears 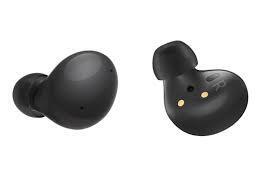 Just looking at what appears to be some promotional pictures of the Buds, they don’t look hugely different to the first set Samsung rolled out back towards the end of 2020, but that’s fine. If it ain’t broke, don’t fix it, after all.

Specs-wise, they’re as solid (apparently) as you’d expect out of a pair of high-end wireless earphones. They’ll land sporting an IPX2 waterproof rating, meaning they’re splash and sweat resistant. You’re not gonna go deep-sea diving with these but they’ll hold out fine on a run or an encounter with a nearby sprinkler.

The buds reportedly have true Active Noise Cancellation, a staple for high-end wireless buds, and should last around 20 hours with it turned on. Turning ANC off will merit you an extra 10 hours of tunes. And if those numbers weren’t awesome enough already, apparently popping the Buds into their charging case for a mere five minutes will charge them up for an hour’s worth of playback.

We learned previously that the case itself will pack a 500mAh battery, so the Samsung Galaxy Buds 2 will last you over a full day and then some. No more arriving at the gym only to realise that your earphones are out of juice.

Lastly, Samsung has reportedly thrown three mics onto these buds too, guaranteeing crisp, clean phone calls, even in noisy areas.

In terms of pricing, WinFuture says you can expect to drop €150 on the Galaxy Buds 2, which translates to R2,570 in South Africa. It probably won’t cost exactly that much, but put some cash aside somewhere in that area if you’re hoping to score these Buds as they land here.