Cyberpunk 2077 is a stunningly realised game (at least when the glitches aren't getting in the way), and if you’ve got the hardware for it, ray-tracing does justice to its shiny neon surfaces. It refines and iterates on decades of RPG and immersive sim designs, even though it doesn’t signal a bold new way of thinking about open-world games in next-gen.

After what feels like 7 years… Wait, what? It has been 7 years? Oh well, after 7 years, the world’s gamers are finally able to get their hands on CD Projekt Red’s anticipated title Cyberpunk 2077. It’s positioned as a follow-up to its smash hit The Witcher 3: Wild Hunt, which did win game of the year in its launch year.

But the long-awaited game has finally made it to PC and previous-gen consoles. That means many die-hards can finally make an informed decision on the likeability of the final product. Reviews have been particularly forgiving, while many gamers have opted to request refunds for a ‘broken’ game.

Let’s dive into the controversial open-world game and see exactly what makes it so. You play as V, a cyber-enhanced mercenary whose appearance and abilities you have full customisation of. Far from a blank slate, however, they’re fully voiced with plenty to say and thrust into a deeply personal mission. Although there’s a central story CD Projekt Red wants to tell, you get to give your own spin on V. They can be wry, knowing and aggressive, yet also just as capable of displaying warmth, empathy, even vulnerability.

As this game is almost entirely in a first-person perspective, you’re fully immersed as them, whether you’re knocking back a shot of tequila or cracking a quip when a gang leader’s got a gun to your face. That might render all that time spent in the character creator obsolete, though it’s all the more reason to check out your reflection in the mirror from time to time or open up the game’s elaborate photo mode.

The visuals are naturally much better utilised on the other characters you encounter, which includes a fairly diverse and strongly written cast, such as Jackie, your big pal with big dreams, or Panam, a nomad at loggerheads with her own clan.

One exception is Johnny Silverhand, a misanthropic underground rocker-turned-revolutionary who’s literally all the worst voices inside your head. It’s a surprise turn from Hollywood A-lister Keanu Reeves who must relish the opportunity to play against type. That said, his appearance and delivery often feels distractingly uncanny compared to the more experienced voice actors. A character in its own right, Night City is a megalopolis composed of multiple districts with their own aesthetics, factions, and a fair share of slang. Most eye-catching is just how seedy the place is, as the game is intent on shocking your senses with all sorts of explicit imagery (it must surely hold the record for the most in-game sex toys).

There’s bound to be comparisons with The Witcher 3’s open world, though it’s unfair to compare a sprawling land in a medieval dark fantasy with a densely packed city. As a fairly grounded RPG, also don’t expect to climb everything you can see in the skyline unless it’s part of a specific mission. Those flying cars far above you may look impressive but they’re basically just set-dressing, and having already encountered numerous bugs in our review build (which the launch day patch tried its damnest top fix) we can only imagine how many more years of development would have been required to simulate a living, breathing city with all its verticality.

Nonetheless, you’re never short on things to do – the overwhelming frequency of associates, fixers and sometimes just total randoms jacking into your frequency mid-quest to provide you with more quests will make sure of that. Everything is guaranteed to help build your character’s stats to unlock new options or perks or earn money or street cred. Yet with all the options you’re bombarded with, it feels almost an escape to just do nothing but cruise around in a vehicle and listen to the excellent in-game radio stations. 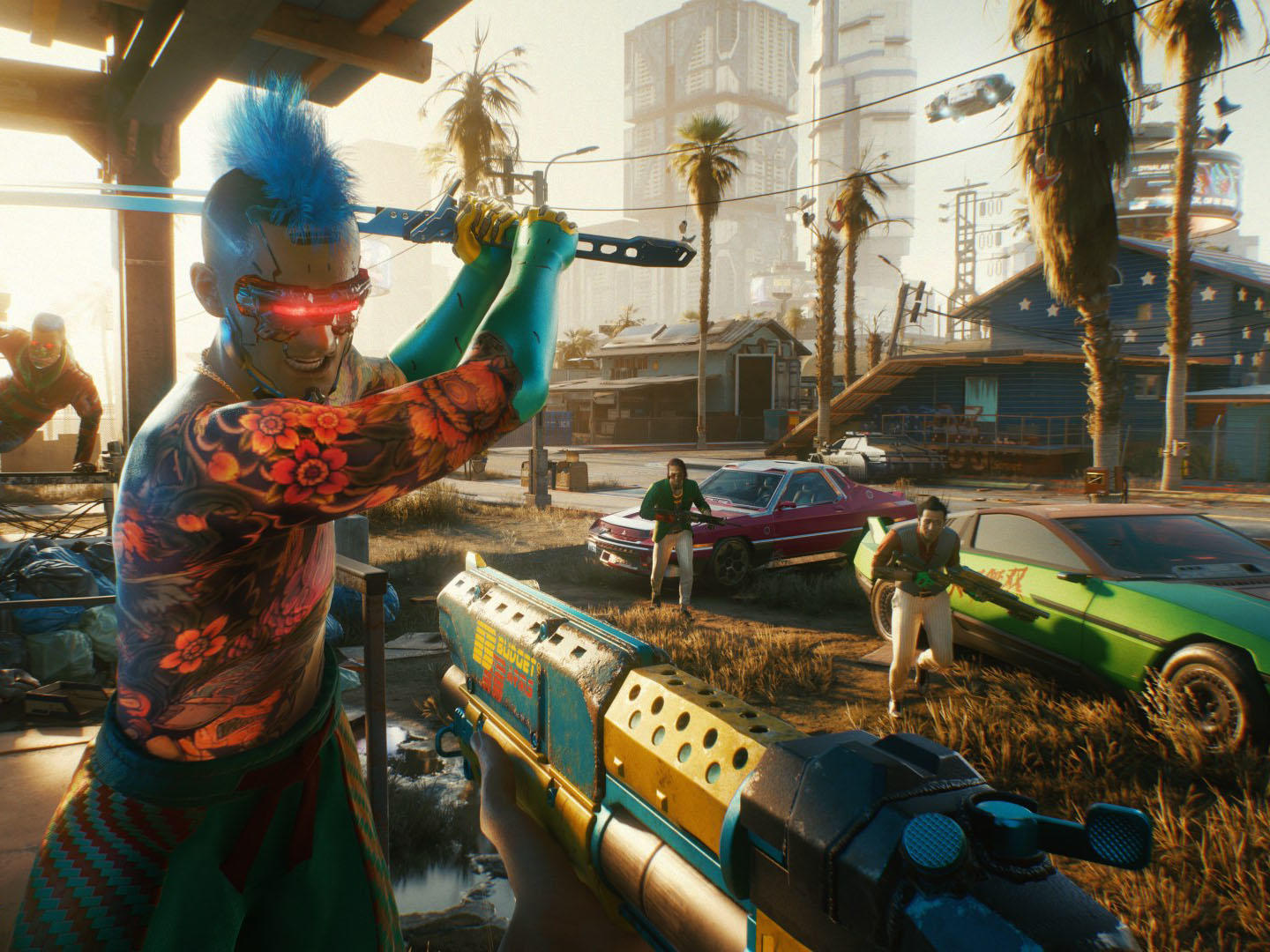 Of course, Cyberpunk 2077 is also a ruthless world where just getting too close to a cop or gang member will always result in them shooting first. While you can choose to approach these situations non-lethally, the offensive options available are just too hard to resist, even for the most ardent pacifist.

The gunplay delivers the solid precision and feedback you’d expect from a first-person shooter, albeit with RPG numbers popping out. That does lead to a disconnect when human enemies can withstand multiple headshots, while handling a spongey boss usually amounts to shoot, run away, reload, repeat. You could always tailor your stats and perks more towards melee play like a katana, though this is arguably the combat’s weakest link.

Better still is exploiting your hacking abilities via your optical scanner. You have the added novelty of being able to directly hack cyber-enhanced enemies, pinging the locations of their mates or installing malware via a hacking mini-game to weaken them.

In practice, Cyberpunk 2077‘s mixture of stealth and combat doesn’t reinvent but merely iterates on some of the best ideas from action-stealth games or immersive sims in the last decade, such as Metal Gear Solid V or Deus Ex: Human Revolution. Even the exciting braindance feature is essentially a fancy VR version of detective mode and only used on a few occasions. Nonetheless, the execution is undeniably slick across the board. 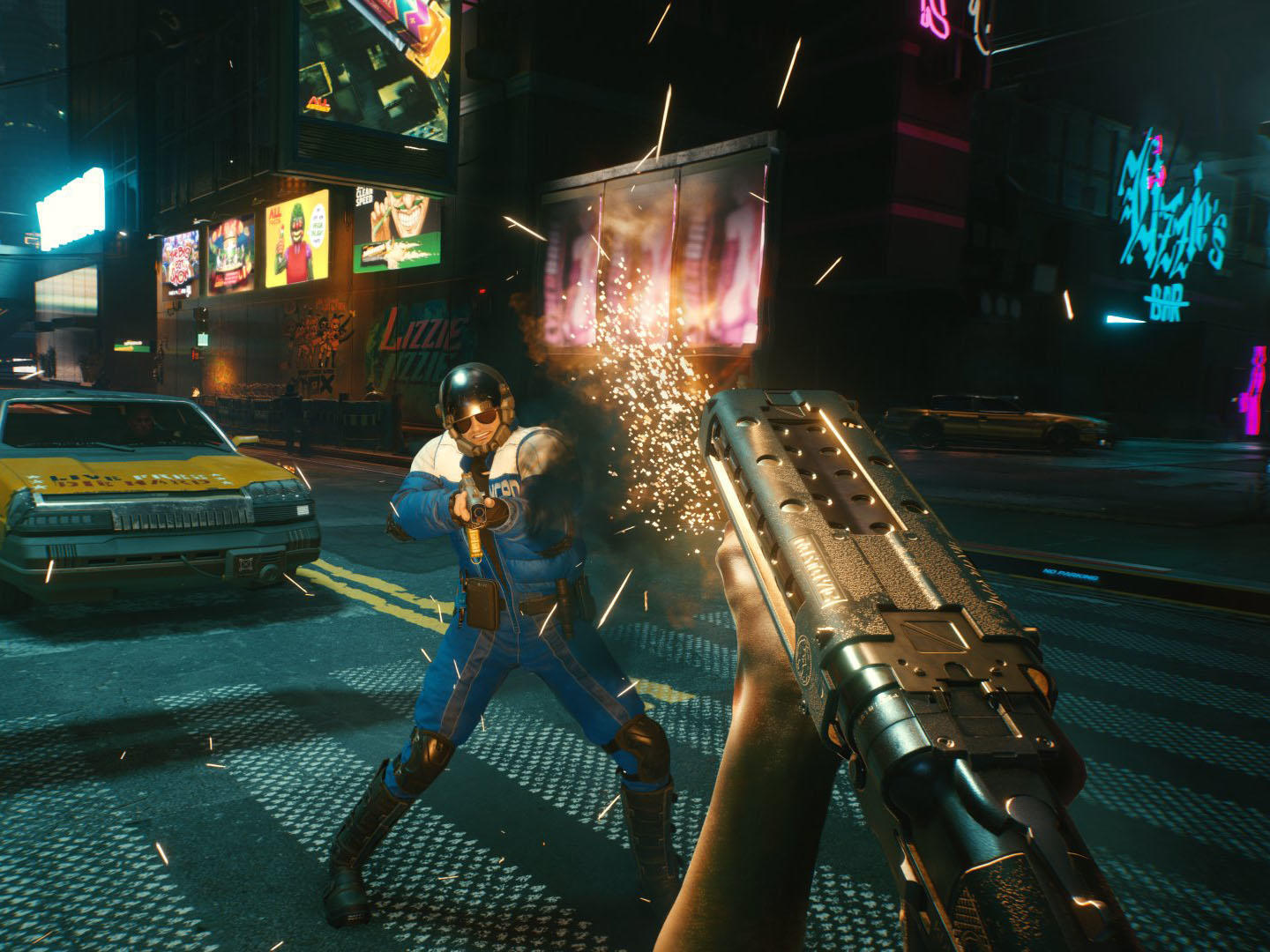 Despite the fact that it takes almost 10 hours to actually see the title appear, Cyberpunk 2077 isn’t as seemingly neverending as most open-world games. The time-poor among you will be relieved to know that it’s actually possible to reach the credits within 30 hours.

Completionists, however, are still guaranteed countless more hours of content and challenges to discover, while there are always incentives to replay as a different kind of V. There are three life paths you can play through, each affecting how your story begins and certain choices of dialogue available to you. Depending on what kind of player you are and how much time you have, it seems everyone’s a winner.

A great open-world game is one that you’ll want to keep spending time in and one you get to know better the longer you’re there. What’s telling about Cyberpunk 2077 is how its fast-travel points — big bright neon-green tourist information points — sum up my time. Despite playing V as a Streetkid who’s grown up in Night City all their life, I still just feel like a tourist.

Cyberpunk 2077 is a stunningly realised game (at least when the glitches aren’t getting in the way), and if you’ve got the hardware for it, ray-tracing does justice to its shiny neon surfaces. It refines and iterates on decades of RPG and immersive sim designs, even though it doesn’t signal a bold new way of thinking about open-world games in next-gen.

The story and themes may not be a revolutionary klaxon for the subgenre it takes its name from, but if you’re just after deep RPG systems that translate to a decent shooter with lots to do then Cyberpunk 2077, as people in Night City might say, is pretty ‘preem’.