The 2020 October update for Windows 10 is out, dramatically overhauls the start menu It’s October and you know what that means! Microsoft is rolling out one of its biannual Windows 10 updates that should introduce some more significant changes to the operating system. You might be wondering what the big deal about this is when your Windows seems to update every week, usually at the most inconvenient of times. While those minor updates are usually to improve and bolster system security, and occasionally insert a GIF search into the system, the October 2020 update is introducing some major changes to the OS and while we might not have asked for any of the changes, they actually look like significant improvements, especially the start menu overhaul.

Speaking of which, let’s actually discuss how this update has changed the Windows start menu. Gone is the solid colour background where tiles and app logos are often difficult to pick up at a glace. The menu has been changed to be more adaptive, with the colour changing based on the background meaning your important apps and programs stand out better than ever. It fulfils the same function and looks identical beyond the colour change but it’s a significant visual improvement that I’m sure many people are happy to see.

The other major change is an expansion of the “Alt-Tab” function. While pressing the Alt and Tab buttons together still lets users cycle through open apps, it now takes into account different tabs open in Microsoft Edge, which is useful for anyone who’s elected to jump the Google Chrome ship for Edge, which is actually really not bad at all these days. You can switch back to the default Windows 10 “Alt-Tab” function if you want though, which is a nice feature.

There’s a range of small improvements to Windows 10 that should hopefully make for a much more refined user experience. Notifications will include small icons of the app it belongs to for quick and easy identification. the taskbar looks much neater and you can now easily set the refresh rate of the monitor connected to the PC, which is actually monumentally useful. 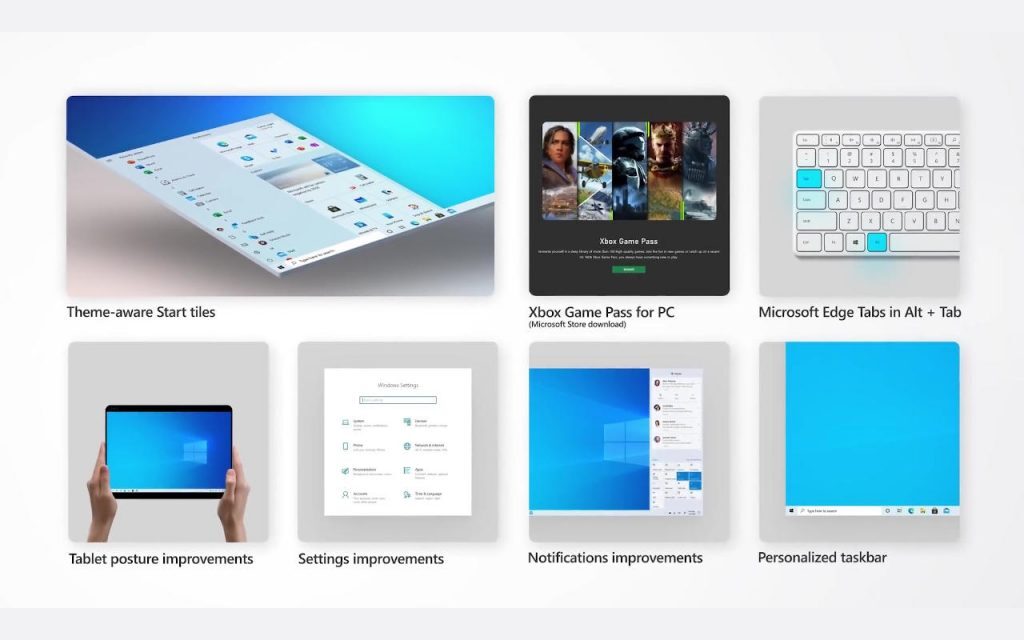 The update is in the process of rolling out to all users so if you don’t have it yet, be patient. It’ll get to you eventually, just give it a while. Microsoft has stated the rollout is slower than usual as due to employees having to work from home. Microsoft’s head of Windows Servicing and Delivery, John Cable (great name for his job) said in a blog post, “We are throttling availability over the coming weeks to ensure a reliable download experience so the update may not be offered to you right away. Additionally, some devices might have a compatibility issue for which a safeguard hold is in place, so we will not offer the update until we are confident that you will have a good update experience.”