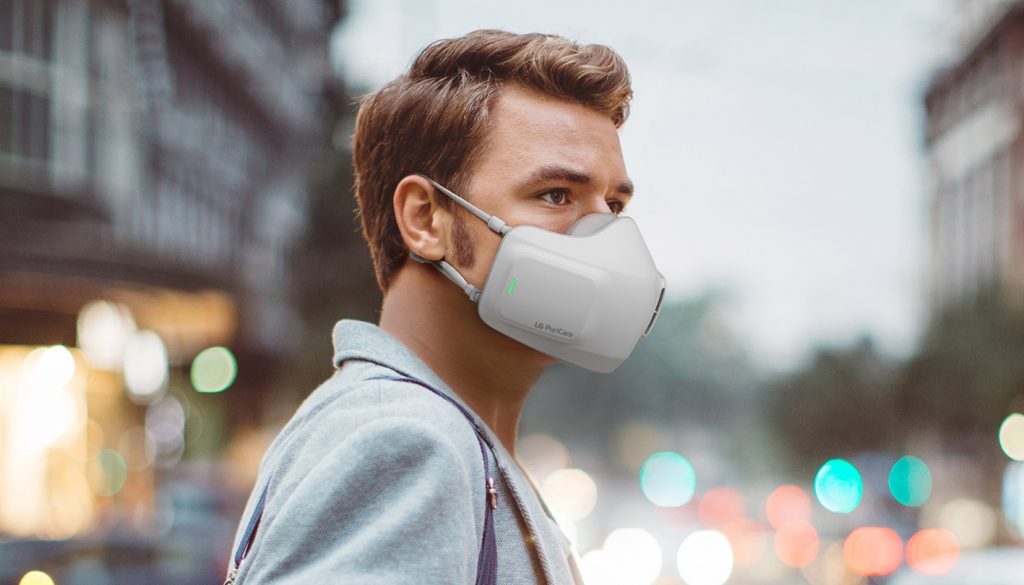 Usually when we’re talking about wearable tech, we mean wristbands, shoes, occasionally a jacket. It’s almost never a mask (okay, there was that one time) but today… today we’re talking about masks. Only this mask is made by LG and contains an air purifier for wearing on your phiz. Face. Whatever.

A different kind of selfie filter

LG’s PuriCare Wearable Air Purifier, to give it its full title, incorporates two H13 HEPA filters. That’s the same filter standard used in LG’s air purifiers. There’s a dual fan system in there, along with something LG cooked up for this product — a Respiratory Sensor. This “…allows users to take in clean, filtered air while the Respiratory Sensor detects the cycle and volume of the wearer’s breath and adjusts the dual three-speed fans accordingly.”

There’s an 820mAh battery inside, which’ll allow up to eight hours of use with the fans on ‘low’ and about two with the fans set to ‘high’. In between uses, it sits inside a combination case/UV bath that kills teeny little germs and things. The filtration system sends a notification to an included app when they need to be swapped out, so you can always be sure of having the highest quality air possible. Because tech can make even breathing better (if a little more dystopian than we would have liked — come on 2020, chill the hell out).

Expect it to launch in “select markets” before the end of this year. Pricing and exact availability isn’t known yet but LG’s showing off the PuriCare Wearable Air Purifier at whatever passes for IFA this year. By which we mean there’s a virtual exhibition going on  throughout September (the link isn’t working right now) where you can check out the newest stuff LG’s cooked up for its fans.