If you’re not one to listen to online squabble and feed into the conspiracies making the rounds in gaming groups, The Last of Us Part II is a brilliant playthrough for anyone who enjoys a challenging game filled with heart-wrenching storylines, well-built characters (pun intended) and beautiful graphics.

We know this review comes well after everyone has already articulated an opinion on Naughty Dog’s latest AAA game. Some of those are very positive, like those of my colleague Brad, and some are not so positive, like you’ve probably seen on most of the internet. But I’ll start by saying this: The Last of Us Part II is not wholly experienced if you don’t complete the game.

This is because it’s a heavily narrative-driven game, and one that comes with more twists and turns than you’d get in a typical M. Night Shyamalan film. Each twist brings about new emotional responses, and how you handle those emotional responses will ultimately mould your opinion about the game. In my case, the whole playthrough was one of highs and lows. There were points where I just wanted to put the controller down and mute the keywords on Twitter, but there were times that I couldn’t take my eyes off the screen, tears welling up.

The brilliant methodology in this game makes it challenging enough to enjoy as a videogame, while pulling you in with a heart-wrenching story of revenge. The first installment of this game managed that quite well, so naturally, the developers wanted to build on that reputation.

It’s not ALL story

This time around, the zombies in The Last of Us Part II are utterly terrifying. Developer Naughty Dog obviously went out of their way to make the zombie noises as creepy and human as possible, while it’s still clear these are really monsters. Zombies that have recently turned have eerie human-like sounds, of people who are clearly in pain, while clickers are just the scariest things we’ve ever encountered… and that’s including the bloaters and newly introduced Shamblers. 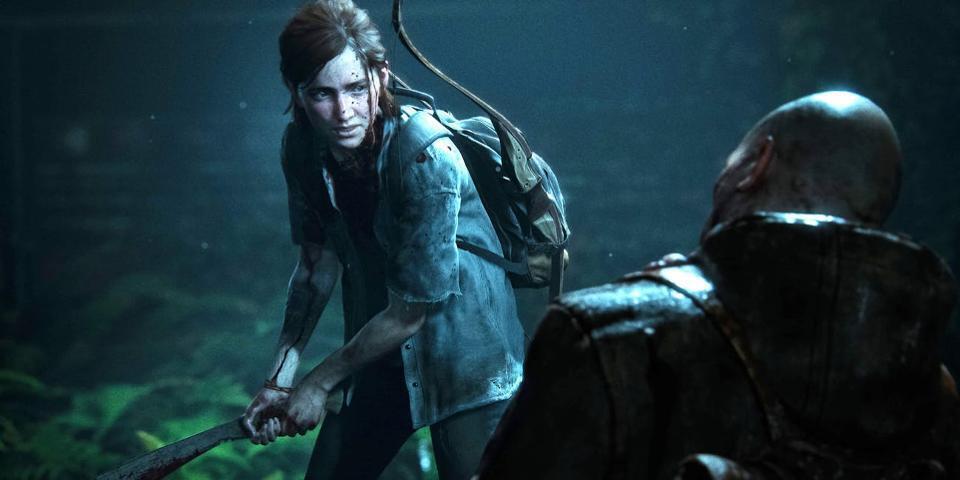 The sneak element is also just done so well. Playing as Ellie, you still have the ability to sense nearby zombies or humans — which gives the player a few different strategies to consider. Unlike Joel, Ellie is very nimble and equipped with her trusty knife, can take on enemies double her size. Easy.

Combat is done exceptionally well, with intense encounters bringing the need for more strategic gameplay. This is no Souls-level combat system, but considering the little resources you have in a post-apocalyptic zombie-infested world, they’re doing just fine.

Now, because the first game had the duo-dynamic with Joel and Ellie, this time the developers brought that dynamic back. This is a spoiler-free review (because everyone should experience this game for themselves), so we won’t go into too much detail here. But throughout the game you’ll play with a ‘sidekick’ about 70% of the time. This includes about four different people on different occasions, each with their own pros and cons. Initially, this is the one mechanic I was not convinced worked well. It felt like the person was more of a liability than of much use, and it gave the game a weighed-down feeling. Like, if you’re going to add a gaming element, that’s supposed to aid in gameplay, make it aid in gameplay.

But after teaming up with the other characters later in the game, it became clear that this is, in fact, a useful mechanism. So the mechanic redeemed itself, luckily.

Which difficulty you play the game on will influence your need to manage resources sparingly. I played it through on ‘Normal’, which actually gave me ample resources and ammunition to comfortably finish the game. There were quite a few times I ran out of ammo and just bonked everything over the head with a melee (always switch your melee to a stronger one, trust). Great strategising right there, buds.

But it is all about story

If we say this game is narrative-drive, it’s no over-promise. The thing that kept pulling me in day-after-day was that story. If you’re at all a person who’s after a good story, and loves reading a good book which you keep going back to, The Last of Us Part II is 100% your type of shit. On a personal level, Ellie is the first videogame character I could relate to on a personal level. This isn’t about political views or sexual orientation, but in how people around her view her as a person. She starts out as a misunderstood teen in a settlement of survivors. Some of those survivors have particularly conservative views, while Ellie just does her part to keep the community safe, focusing on her role as a cog in this broken, but functioning system.

As you progress through the game, Ellie grows as an individual, making decisions no young adult should make. But this is a different world where literally everything wants to kill you and the people you love.

The writers have gone out of their way to put you in the shoes of a survivor, making you feel like one of the last people on earth, and the decisions that go with that. In this world, there are many remaining, most of whom have established and joined a variety of factions. Most of whom are also trying to kill each other. Following some more traumatic events (oh, you’ll encounter so many of those), character growth is inevitable. When issuing the review code, developers accompanied it with a short message, including a few things to keep in mind when playing through this title. It reads “The themes of The Last of Us Part II are based on a universal truth – that just as we are capable of unconditional love, we are also capable of unforgivable hate. And those two feelings are inextricably linked.” Oh, how true that is.

Even though on its surface, The Last of Us Part II is a story of revenge on its surface there are so many more underlying themes of redemption, finding love in a loveless world and making decisions that could impact a lot of human lives. All while killing a buttload of zombies on a daily basis. Because this is a zombie game, remember?

The Last of Us Part II Verdict I consider myself a relatively objective person, never really getting sucked too deeply into narratives of games. This, however, is the first game that made me feel emotions I’ve never thought I could feel. At one point, at about the 75% mark into the game an intense sequence of events that the game forces you to play through brought me to tears. I felt a feeling of utter relief, sadness and happiness all at once. Without me noticing it at first, tears started rolling down my face. At this point it was clear that the writers had done their job — this is a good game.

If you’re not one to listen to online squabble and feed into the conspiracies making the rounds in gaming groups, The Last of Us Part II is a brilliant playthrough for anyone who enjoys a challenging game filled with heart-wrenching storylines, well-built characters (pun intended) and beautiful graphics.