Mark it in your calendars, folks – Volkswagen’s Taigo SUV range is officially coming to South African Volkswagen dealers this Monday, 6 June. And if you’re wondering just how badly this is going to affect your wallet, pricing for the Taigo SUV range starts at R429,900. The launch of the Taigo marks the 6th vehicle released in the VW T-SUV range. It joins the ranks of the T-Cross, T-Roc, Tiguan, Tiguan Allspace and the Touareg.

If you’d like to see the Taigo up close and personal before it’s 6 June release, you can. This weekend, Volkswagen is hosting a free event in order to promote the Taigo. It’s taking place at the Prison Break Market in Johannesburg, with a bunch of activities planned for the event. If you’ve got nothing better planned, go take a look. Be warned, you’ll need to register for the event if you’d like to attend. The Taigo is launching in 3 models, namely; Taigo Life, Taigo Style, Taigo R-Line. The differences between the 3 focus on quality-of-life features, offering increased comfort for those willing to pay that little bit more.

Besides that, the Taigo Life will include LED headlights and tail lights. A fully digital cockpit, with a 6.5in Infotainment System Screen. The front centre armrest has a built-in USB-C interface. The side mirrors are the folding in and out kind, and will include a heating function to get you on the road quicker during those icy Winter mornings.

The wheels are 16in Belmopan alloys, which are really easy on the eyes. On the front of the car, you’ll find a chrome-looking crossbar to extend the shiney trim look. The exterior mirrors and black roof rails include a projection light to keep things looking chic. The Taigo Style is the upgraded model of the base Taigo Life. Here you’ll find upgrades for the interior to keep you more comfortable, with a few exterior upgrades. The first difference you’ll find is the lights. Where the Life has regular LED headlights, the Style has fancy sounding IQ LIGHT LED matrix headlights.

On the inside, you’ll find added ambient lights, to set the mood and keep you up on those late-night road trips. You’ll also have access to parking distance assist for the front and rear. The infotainment system has seen an upgrade too. Rather than the 6.5in screen, the Style will feature a slightly bigger 8in screen.

To really set the Style model apart from the others are the wheels and bumper. Instead of 16in alloy wheels, the Style will come equipped with 17in Aberdeen alloys. For the bumper, you’ll see a chrome strip, a silver diffuser and silver anodised roof rails.

If you’re looking to purchase the Style model, then you need to get the big bags out to afford it. You’re looking at a difference of R34,200 between the two. These upgrades aren’t entirely necessary, but if you can, then why not. 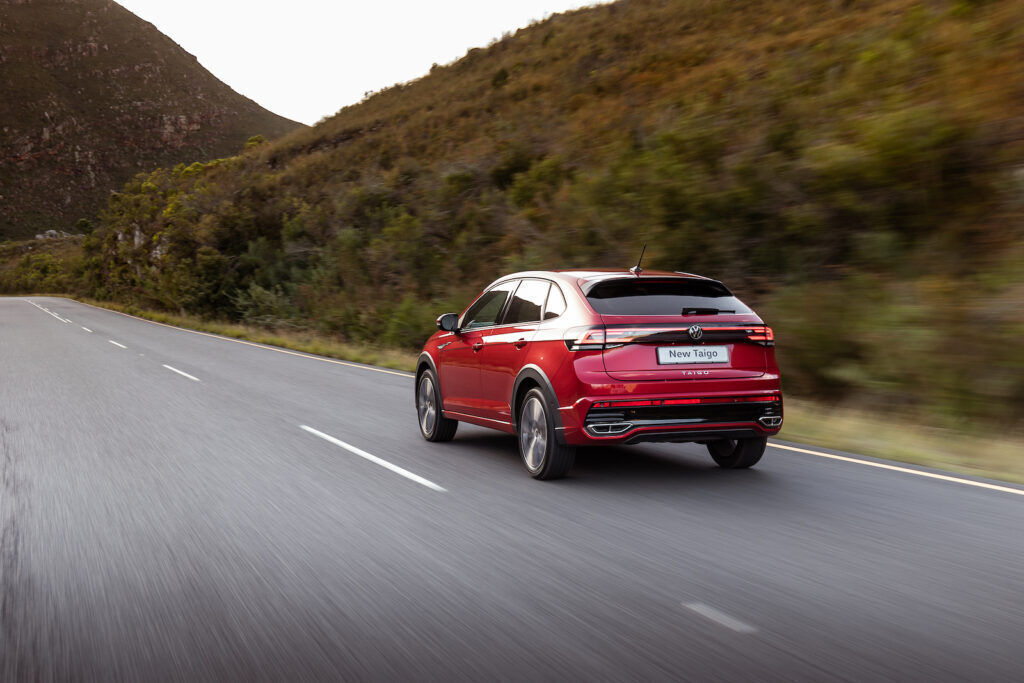 The R-Line takes everything from the previous models and adds a bit more flare. The changes to the R-Line are again purely physical and feel even more exorbitant than the Style. The R-Line features slightly different 17in Valencia allow wheels. There’s also a black headliner, stainless steel pedals and privacy glass for the side and rear windows. You’ll also see that the bumper has its own R-Line design.

If the price of the Style derivative frightened you, then you might want to look away for this. The Taigo R-Line will cost you R486,000. For a few extra pieces of chrome, slightly different alloys and some privacy glass, the price increase probably won’t make much sense to most people.

It looks like Volkswagen have a real winner on its hand with the Taigo Life. It’s a little difficult to say the same about the other two models. Keep an eye out on the roads from next week, we’re sure you’ll see a couple of people showing these off.