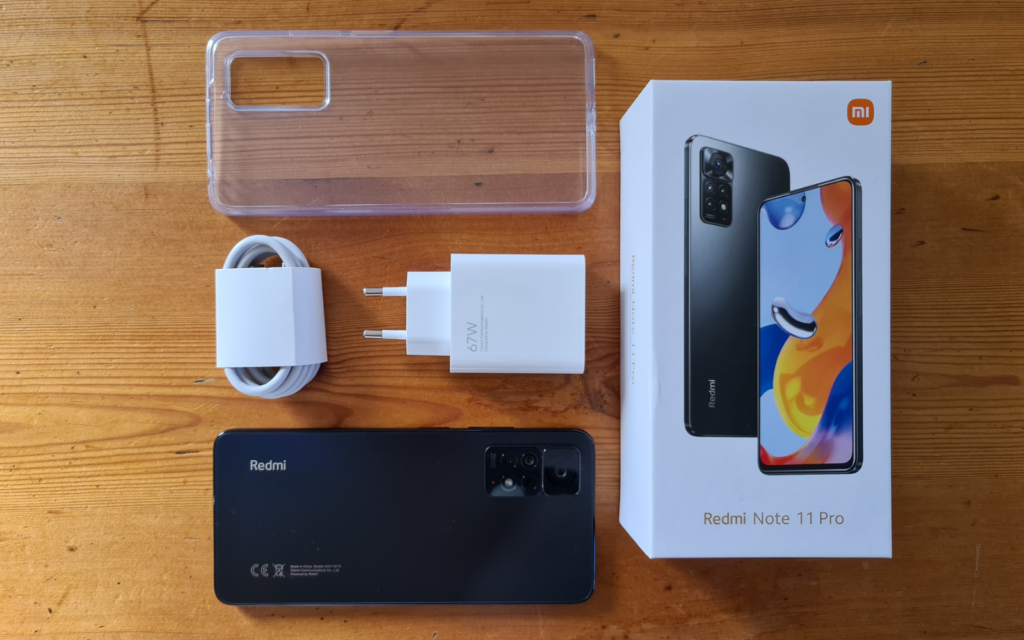 Xiaomi’s Redmi Note 11 Pro is not a terrible phone. Every aspect, apart from gaming, is handled just well enough that you won’t feel cheated. The display and battery life do their best to pull it over the line of ‘good enough to recommend’. Even so, we just can’t help but feel Xiaomi could’ve done a lot more with this one. It’s not a bad phone, it’s just a little disappointing.

At first glance, the new Xiaomi Redmi Note 11 Pro seems a decent mid-range device. For R6,500 you get a lot of bang for your buck. Zoom out a bit, though, and things become a bit murky. There’s a lot going on with the company’s smartphone lineups.

Confusing naming conventions aside, is the Redmi Note 11 Pro worth your consideration and hard-earned money? Maybe.

Bit of an edge The ‘maybe’ needle doesn’t move much when it comes to design. There isn’t a single thing that stands out about the Note 11 Pro. The flat, straight sides make it a little more grippy than its rounded-edge cousins. The curved corners don’t dig into your palm. That’s always nice. It’s also got a Gorilla Glass front and back that help it feel more premium than it is. We will say that the matte finish on the back does a good job of hiding fingerprints. But if you use the included case, that doesn’t really matter.

Taking a tour around those flat edges, you’ll find a 3.5mm headphone jack (yes, those still exist), one of the speakers, and an IR blaster. Those still exist too, apparently. We can’t remember if we ever got excited about having an IR blaster. But it’s here if you feel strongly about removing all the remotes in your house.

The right side houses the volume rocker and power button/fingerprint reader. The left side is barren. Along the base, you’ll find another speaker, a USB-C 2.0 port, and the microSDXC/SIM card tray. Its 128GB of storage can be expanded, which isn’t a given on mid-range devices.

The speaker layout is fairly standard. There are two in total, although the top one has two grilles, one for your ear during phone calls and on top with another along the bottom. The top and bottom two are in stereo but not front-facing. So when you’re holding the phone horizontally, you’re likely to cover them which is enough to disgruntle anyone. When they aren’t covered, they actually sound decent and will get plenty loud enough. So, in this case, consider us gruntled. About the only standout feature of the Redmi Note 11 Pro is the pristine 6.67in Super AMOLED display. You’ll get 1,080 x 2,400 pixels in a 20:9 aspect ratio. There are two refresh rate options to choose from — 60Hz and 120Hz. Both are static, meaning whichever you pick is what you’ll get. Most of the time. The 120Hz option does drop to 60Hz when playing 60fps video or in apps that don’t offer 120Hz support. That’s as dynamic as it gets

This is a budget device though so there isn’t any HDR10 support at all. The one real gripe we had was the auto-brightness feature. At times it felt like it wasn’t reading the ambient light properly, so it got too dim. Switching to manual fixed that. It seems a small thing, but those add up.

The second headline feature is battery life. It’s exceptional. You don’t get the company’s flagship 120W charging but there is a 5,000mAh battery and 67W charging. At one point in our testing, we wanted to measure if Xiaomi’s claim of 51% in 15 mins held any truth. In order to do that, we had to run it dry.

That proved harder to achieve than we thought. We opened every installed app, and switched between full-screen YouTube and dual screening YouTube while running benchmarks on the CPU and GPU and it still lasted most of the day.

Charging takes a shade longer than advertised. We measured 28 mins from 1% to 50% and just under 50 mins for a full charge. Under normal usage conditions, you can expect a full day at least. A day and a half is well within reach. There are the standard Xiaomi battery saver modes if you must stretch it even further.

And now for the cheese You’ll find the typical mid-range four-sensor camera array in a rather standard-looking bump. It’s not quite the shelf the Poco X4 Pro or M4 Pro feature but it will cause some rattle when lying ‘flat’. Expect a 108MP high-resolution sensor, an 8MP ultrawide, and two 2MP sensors for macro shooting and depth sensing. A 16MP selfie shooter does its best to make you look good for the ‘gram or Tinder. Those sensors are complemented by a decent assortment of features in the camera app. The ‘Pro’ mode is surprisingly capable.

You can expect the usual over-sharpening seen in most mid-range devices these days. That’s because the Image Signal Processor in budget chipsets doesn’t get as much love and attention as it does in flagship chipsets. Low light performance is sub-par, which we expected. But if you’re shooting with good light it is possible to capture some great shots.

Video capture is more of a mixed bag. You’re limited to just [email protected] with the main and ultrawide sensors. Again, you’ll want to stay where it’s light. There’s no 4K or high-refresh-rate video capture, another downgrade from the Note 10 Pro. But we will say, the video stabilisation, while not terribly fancy, does the job remarkably well.

As to the Redmi Note 11’s performance… it’s not great. The Mediatek Helio G96 chipset is a puzzling downgrade from the Snapdragon 732G from the previous Note 10 Pro. We’re not sure why Xiaomi went with this one. To create yet another market segment? Is the chip shortage to blame?

The Note 11 Pro and the Note 11 Pro 5G should be one device. Sure, here in SA with 5G coverage being as sparse as it is, it isn’t a big deal. But it would be nice to have, if just for the little bit of performance headroom.

During the battery test, we had every app open at one point, filling the 6GB of RAM to capacity. That is obviously an exception and not the norm but we suspect there was some background trickery going on because it wasn’t as sluggish as we would have expected.

Gaming performance wasn’t as forgiving. In mainstream games like PUBG Mobile, Call of Duty Mobile, and Genshin Impact we had to turn down the settings all the way to get playable framerates, and even then it struggled at times. Chess and Sudoku turned out a little better. This isn’t inherently bad but it does mean that if you plan to do most of your gaming on your mobile and those games are AAA titles, you want to consider other options at this price point.

Xiaomi’s Redmi Note 11 Pro is not a terrible phone. Every aspect, apart from gaming, is handled just well enough that you won’t feel cheated. The display and battery life do their best to pull it over the line of ‘good enough to recommend’. Even so, we just can’t help but feel Xiaomi could’ve done a lot more with this one. It’s not a bad phone, it’s just a little disappointing. Still, you might want to buy one. In that case, the Xiaomi Redmi Note 11 Pro is available now from most places you buy phones at a recommended retail price of R6,500.