If you're a serious gamer looking for a portable system that doesn't sacrifice on performance, or a creative professional where your time is literally your money  and you can't sit around all day waiting for a video to render -- and you have very deep pockets -- then this is for the five or six of you.

The last time we looked at a Zephyrus, we said that laptops hadn’t really changed all that much since their beginning. And this year’s edition hasn’t changed that much from that one. But dual-screen laptops have been around for a good couple of years now, so let’s find out how Asus plans to set this one apart from the rest.

The look and feel First, let’s take a look around the outside. As with the previous Zephyrus design, we’ve got a well-engineered, well-constructed, sturdy, all-metal frame with a matt finish that does a fairly good job of fighting off fingerprints, though it’s not completely immune.

This time around ours came in matt black, and although this is definitely a gaming laptop, you won’t find the usual in-your-face RGB flair all over the show, besides the back-lit keyboard that is. There’s also a non-illuminated ROG logo on the back but that’s about it for branding. Down the left side, you’ll find a microSD slot, DC adapter port and earphone and mic combo, and down the right, you’ll find a couple of USB 3.2 Gen 2 Type-A ports and one USB 3.2 Gen 2 Type-C port that can also serve as Display Port output or another option for power delivery with up to 100W charging. Around the back, you get an ethernet port, an HDMI 2.0b port and another of those quick Type-A USB ports. 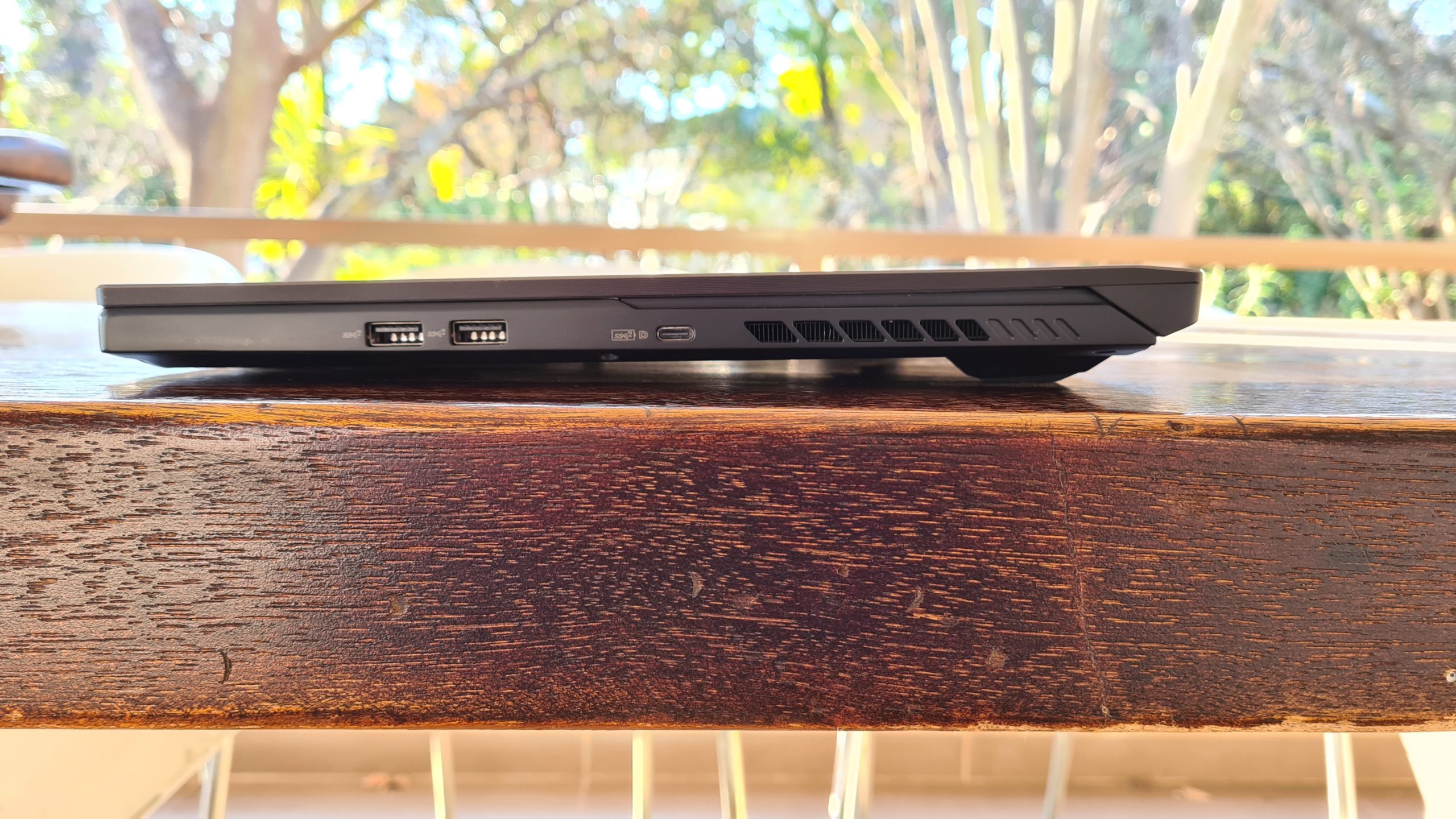 We were scratching our heads a little at some of the choices here. We would have liked to see the DC port around the back to keep it out the way because if you’re going to want to use this beast to its full potential it’s going to need to be plugged in.

We also found the inclusion of the microSD slot to be a little puzzling. If you are in the creative camp and wanting to use this for editing, then hopefully you aren’t like 90% of the industry and using one of those standardised, mainstream, regular SD cards. You know, the ones that every camera uses. If you are, then you’ll need to find a workaround, which is a shame.

Can you see it?

For this iteration of the Zephyrus Duo 15, as with the previous one, you’re given two choices for your main display — each with a specific use-case in mind, both of which are IPS-based.

For the digital artists, video editors or anyone prioritising colour accuracy, there’s the 4K option with a resolution of 3240×2160, a refresh rate of 120Hz, an advertised response time of 3ms and purported 100% coverage of sRGB colour space, 99% coverage of AdobeRGB and 93% of DCIP3.

For the gamers and streamers, there’s a 1080p option with a 300Hz refresh rate, with the same 3ms response time and same sRGB coverage but at a quarter of the pixel count.

Our review model came with the 1080p config and we think it’s the better of the two choices. You tend to lose some of the benefits of a 4K panel at this size, not to mention the increased battery consumption. As for the second screen, or the ‘ROG Screen Pad+’ as Asus calls it, its inclusion seems to have been better thought out this time around, kinda. If you’ve ever worked with multiple monitors and mismatching resolutions, then you’ll know how frustrating Windows can make it to work between them, especially when they’re stacked vertically. Thankfully, Asus will match the resolution of the second screen to the resolution of the main panel. Both are touch control compatible.

While any extra screen space is welcome, the integration of the Screen Pad+ can turn its inclusion from being a well-constructed, very expensive extra that you can’t untick, to feeling like you have one hand plugged directly into your laptop. In this case, Asus has done well in some areas.

When you open the lid the Screen Pad+ opens up automatically to a 13-degree angle. By doing this Asus is also able to put a couple of air vents underneath the screen, which helps a great deal with keeping all that performance cool. It would have been nice if that angle was adjustable but we think that might be asking a bit much at this point. You’ll get some integration for programs like a control panel for Adobe applications like Premiere Pro and Photoshop and Lightroom. We don’t know too much about any supported game integrations but some of the promotional material featured art from Dying Light 2, so that could be one. While nice to have, the extra screen does come at a cost. The trackpad and keyboard have had to shift down quite a bit to accommodate the extra screen. This makes using the laptop on anything other than a table or desk near impossible for extended periods. That being said, the per-key RGB backlit keyboard wasn’t terrible to type on. The trackpad is probably Zephyrus’ biggest detractor. It can double as a numpad and we recommend keeping it on that setting. You’re going to want to use an external mouse.

Performance – there’s a lot of it

Now on to the meat and potatoes, the performance. There isn’t a whole lot of nuance here. Asus picked the fastest CPU and GPU on the market and stuck them in. The unit we received had the AMD Ryzen 9 5900HX and the Nvidia RTX 3080. You can get different configurations of RAM and storage up to 48GB and 2TB respectively. It should be noted though, that the RTX 3080 isn’t a full-blown desktop variant but rather the 130W pulling laptop-friendly version.

That doesn’t mean it won’t play every game you throw at it with ease. We even tried the buggy, unoptimised mess that is Cyberpunk 2077 and it still managed a very respectable 80+fps when you enable DLSS. Don’t expect to take this performance on the go though, you’ll need to be plugged in, or face painful power throttling. The 90Wh battery should give you 4 –  5 hours of light use depending on if you’ve got both screens running and what you’re doing. For anything intensive, you’ll want to plug in with the massive 280W charger.

If you’ve reached this point and are actually thinking about buying one, we hope you’ve been saving. In South Africa, right now, you can only get them through Evetech and they start at around R80,000. Which, in Asus’ defence, is cheaper than the previous generation.

Asus has made some pretty neat improvements over the previous generation. The switch to AMD was definitely a smart one because these days you call your product ‘the most powerful laptop on the market’ if you don’t have an AMD CPU inside.

If you’re a serious gamer looking for a portable system that doesn’t sacrifice performance, or a creative professional where your time is literally your money and you can’t sit around all day waiting for a video to render — and you have very deep pockets — then this is for the five or six of you.