Valve’s been making (often slightly superfluous) controllers for a hot minute now, but a Steam-equipped console hasn’t ever been more than a rumour. That changes now, with the announcement of the Steam Deck, designed so you can play all of your favourite Steam games wherever you go. Setting the (in our opinion) poor name aside, Valve boasts that the Steam Deck is “the most powerful, full-featured gaming handheld in the world”. The handheld sports an AMD APU made up of 16GB of RAM, a quad-core Zen 2 CPU and an RDNA 2 GPU. It’s also got some healthy storage options depending on what you’re willing to pay for.

The internals certainly aren’t something to sniff at, but what of the external hardware? Well, the Deck looks a lot like the Nintendo Switch. It’s got two (non-detachable) handles on either side of a 7-inch 1280 x 800 720p touchscreen. On the left you have your left analog stick, D-pad, ‘view’/’share’ button and the L1 and L2 buttons. The right hand side has your right analog, a set of A B X Y face buttons, the ‘options’ key and the R1 and R2 buttons. Personally, we find the layout of the face buttons and analog sticks a bit strange and uncomfortable, but we’ll have to wait to get our hands on one before we rush to judgement. 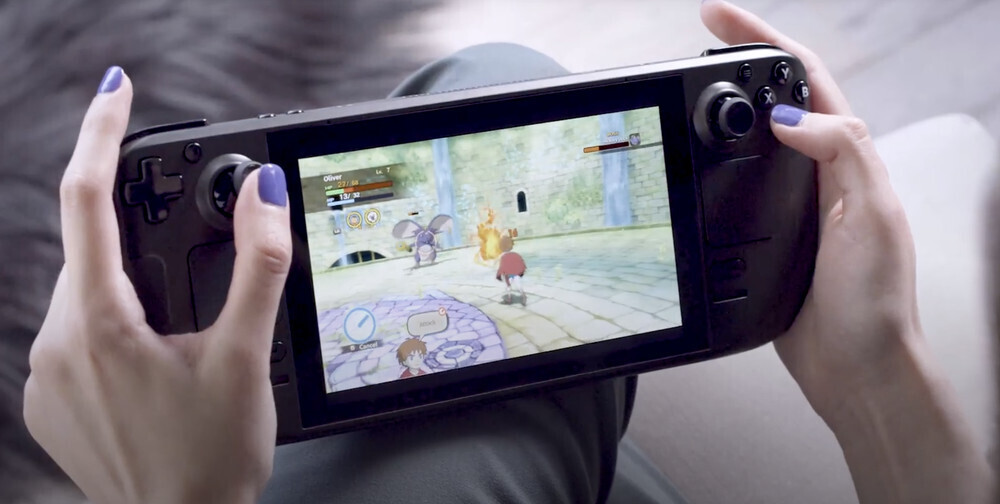 So far, so standard. But here’s where things get a little different. On the left and right sides of the back of the console you’ll find R4 and R5 buttons, and L4 and L5 buttons respectively. These will, presumably, be mappable to specific inputs, probably best used in MMOs, RPGs, MOBAs (like LoL or DOTA 2), and real-time strategy games.

Additionally, both grips sport trackpads below the analog sticks, possibly for precision aiming in first-person shooters. There’s also a dedicated Steam button on the left, and a ‘Quick access’ button on the right.

Like the Switch, the Steam Deck also offers gyroscopic controls and a ‘Suspend/Quick resume’ feature that lets you pause or pick-up-and-play any game, barring online multiplayer titles.

The entire thing runs on a handheld-optimised version of Steam OS, which is why it’s said to connect seamlessly to your Steam games library. This also means you’ll be able to access all of your favourite Steam tabs, like the store, chat and notifications centre.

The Steam Deck also pairs with a separately bought dock that keeps it charged and can connect to external monitors. You don’t need the dock to do this though. The handheld on its own can plug into a TV or separate monitor if you’ve got the right cables, which gives it a bit of a one-up on the Switch. The Deck has USB-C ports geared for charging, HDMI, USB data and even Ethernet connectivity. Plus, it’s got Bluetooth support.

The Steam Deck ships out to the US, UK and Canada in December this year, and will arrive in other countries sometime next year. There’s currently a ‘reservation’ process at play for antsy customers who really want to be first in line for the console. Like we said, the lowest price of admission here is $399 (R5,777) but that’s definitely subject to change (particularly with the whole semiconductor situation) and is also region dependent. We’ll let you know more regarding local pricing and availability once we hear it.