I've been battling to figure how to exactly summarise and end this review. It feels like I've already gushed to a disgusting extent so to wrap up, I'm going to ask you to dip into memory lane. Remember the Disney film Treasure Planet? There's a scene in that movie's first act that features the protagonist Jim surfing around on a solar-powered flight board. He's grinding off walls, ducking through gaps and flying through the sky in a scene that's both exhilarating and envy-inducing. Skating around on the Evolve GTR Carbon, feels like that scene.

Here at Stuff HQ we receive many products for review. A wide array of smartphones, laptops, high-tech facemasks, even a night-vision sniper scope that made Brett lock himself in an empty, windowless warehouse to test. Yet, in my tenure writing for this publication, the Evolve Carbon GTR Electric Longboard is one of the coolest things we’ve ever reviewed. Perhaps I’m biased, I’ve been skating/longboarding for a few months now (it was my lockdown hobby, inspired by Tony Hawk’s Pro-Skater 1 + 2). The act of rolling every member of the editorial team around the office parking lot on the Evolve board was met with an overwhelming consensus that it was special.

To fill you in on what the Evolve Carbon GTR is, think of a longboard: A thin piece of reinforced wood dangling precariously between four thick wheels. Now replace the plank (known as the deck) with a 14AH Samsung Lithium-Ion battery, the wheels with 7in pneumatic all-terrain tyres and strap a dual 1500 watt high-performance custom made motor onto the back and you’ve got a pretty good idea of how we’ve been spending our afternoons in the Joburg Botanical Gardens. 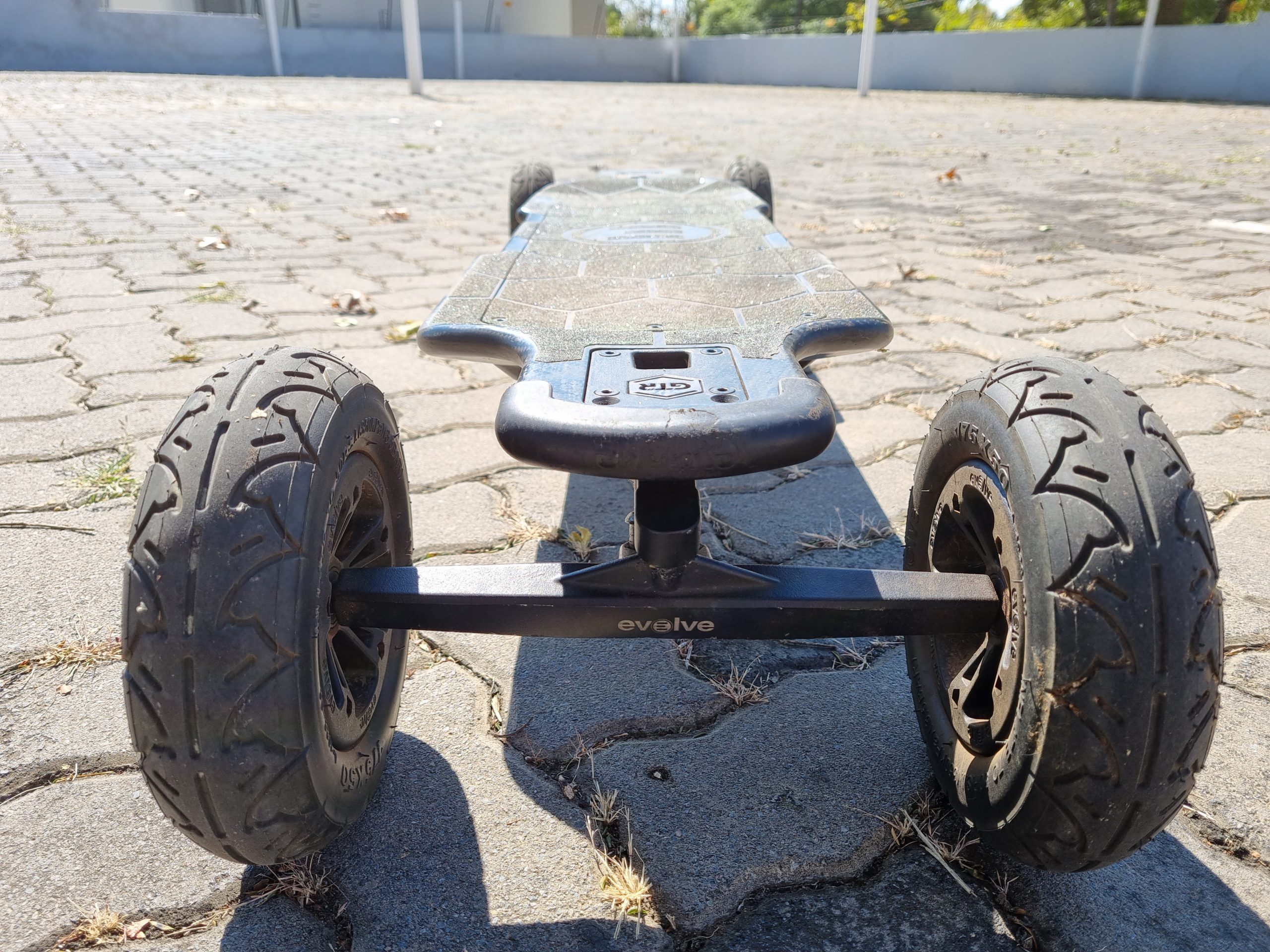 Longboarding is a great deal of fun. Doing it on a motorised board? Yeah, that’s even better. Cruising on the streets on the Evolve is easily the most fun we’ve had all year. The actual device is remarkably elegant and is controlled by a very comfortable hand-held controller that feels like half an Xbox gamepad. It feels like it should be a complicated thing to control but the Evolve’s simplicity is one of its major selling points. A very sensitive trigger on the back of the controller handles your speed and acceleration while the one on top acts as a brake. It all works via a Bluetooth connection that’s seamless; turn the board on, turn the controller on and pair without a hassle.

Let’s also just touch on that design: It’s cool. The chunky deck and wheels feel like they’ve been lifted from the background of a noir cyberpunk film and while the actual board is very heavy, that doesn’t really factor into much when you’ll be cruising around on top of it rather than the other way around.

It also lets you zip through the various modes on offer to really ensure you’re going at a speed that feels comfortable for you. To get a feel for the board, you should start in Safe Mode, which drastically limits the speed of the longboard. From there you can graduate to Eco, Pro, GTR and even Custom if you truly feel like living life on the edge. While the lower speeds are fun in their own right, if you really want to get to grips with this thing, I suggest using the Pro setting. It has more kick than you’re expecting, trust me.

Speaking of which, what Evolve has managed to do with the GTR Carbon in terms of raw performance specs is nothing less than staggering. You’ll be able to push to a maximum speed of 36km/h, although we’re fairly confident we went faster on a few downhills, according to the handy speedometer on the controller’s display. Perhaps even more impressive than just the speed of the board is the range which it covers on a single charge. You should be able to cover around 30km on the GTR Carbon which is more than enough for a pop down to the shops or a cruise through your local park. People will stare. You’ll be asked questions. And you’ll feel like the coolest person alive. Maybe that’s just me, I love the spotlight that comes with overtaking a cyclist on an uphill with an electric longboard. When I say uphill, I’m not talking about a little hump either. The GTR Carbon can handle hills with upwards of a 30% gradient in GTR mode which, if you’re wondering, is impressively steep. You’ll use more battery in doing so (obviously) but removing the sad and tiring climb up the hill you just bombed should be enough to sell you on this idea alone.

Yet the thing that takes the Evolve GTR Carbon to another level is the off-road capability. Normally, if you were to take a skateboard or similar vehicle off a standard road, you’ll fall on your face. Yet the GTR Carbon bounces off rocks, cracks and small ditches like it’s aspiring to be a Hilux. It’s exhilarating, put it that way. It’s also amazing for South African roads, which I’m sure you’ll have noticed have become increasingly worse over the last months. You’ll be gliding over potholes and stones like there were mere bugs in your path, just remember to bend your knees.

For the sake of fairness, we’ll also point out something that we found slightly annoying with the GTR Carbon and that’s the charge times. Considering the size of the battery and how much power it needs to hold at any given second, we can’t be too harsh but waiting between 4 and 5 hours to charge it to full from empty is a long time in which you’re not shredding. Having said that, on all the routes we’ve taken we’ve never actually depleted the battery all the way through. There’s something to be said about power efficiency.

I’ve been battling to figure how to exactly summarise and end this review. It feels like I’ve already gushed to a disgusting extent so to wrap up, I’m going to ask you to dip into memory lane. Remember the Disney film Treasure Planet? There’s a scene in that movie’s first act that features the protagonist Jim surfing around on a solar-powered flight board. He’s grinding off walls, ducking through gaps and flying through the sky in a scene that’s both exhilarating and envy-inducing.

Skating around on the Evolve GTR Carbon, feels like that scene.

It’s unbelievable fun whether you’re a skate or not. If you can afford one, I can’t recommend it enough. Now if you’ll excuse me, I’m late for an appointment with a sick downhill in Rosebank.

The Evolve GTR Carbon is available for R33,000. You can find it over on Evolve’s website here.