Ghost of Tsushima is on our doorsteps, begging to be played by one and all. It’s been a long time coming with developer Sucker Punch first teasing the project several years back. Now, just two days before the game releases on 17 July, critics have been able to share their thoughts on the game. While most of the reviews are exceptionally positive, there are still plenty of complaints game journalists have regarding Sony’s latest exclusive. So we thought we’d gather their thoughts into a singular place for folks to get a better understanding of the PS4’s last major exclusive.

“A melancholic tale of war and a fitting epilogue to a current-gen era, Sucker Punch’s latest effort is a slick showcase for the PlayStation 4 that draws you into a world that never fails to impress. Ghost of Tsushima is a masterpiece of precise gameplay, emotional turmoil and powerful world design.” – 90/100 “The game may not be an evolution of the genre but it is one of the best versions of it. By mixing a beautiful setting with visceral combat, Ghost of Tsushima hopes that its lesser elements won’t be as bothersome and its story will be able to propel players forward. Personally, the compulsion to uncover every question mark, complete every Tale, and master the combat was very strong. If the idea of controlling a deadly Samurai in an Assassin’s Creed-style open world sounds enticing, the game more than delivers.” – 90/100. “Ghost of Tsushima is an enormous and densely packed samurai adventure that often left me completely awestruck with both its visual spectacle and excellent combat. By steadily introducing new abilities instead of stat upgrades, its swordplay manages to stay challenging, rewarding, and fun throughout the entire 40 to 50 hours that it took me to beat the campaign. A few aspects are surprisingly lacking in polish in comparison to other first-party Sony games, especially when it comes to enemy AI and the stealth part of its stealth/action split. Still this is an extraordinary open-world action-adventure game that solves several issues that have long gone unaddressed in the genre, while also just being an all around samurai slashin’ good time.” – 90/100 “The game hits a lot of fantastic cinematic highs, and those ultimately lift it above the trappings of its familiar open-world quest design and all the innate weaknesses that come with it–but those imperfections and dull edges are definitely still there. Ghost of Tsushima is at its best when you’re riding your horse and taking in the beautiful world on your own terms, armed with a sword and a screenshot button, allowing the environmental cues and your own curiosity to guide you. It’s not quite a Criterion classic, but a lot of the time it sure looks like one.” – 70/100 “It has its moments, but like Jin Sakai in the opening hours, the past holds it back. It’s Open World: The Video Game. It’s far too easy, too – the lack of consequence for failure makes it feel like you’re just going through the motions. If you’ll excuse the wind-based pun, it’s a breeze. While playing it, I often found my mind wandering. By the third and final act, I just wanted it to be over. Like the samurai, Ghost of Tsushima feels like a relic of a bygone era.” – 60/100 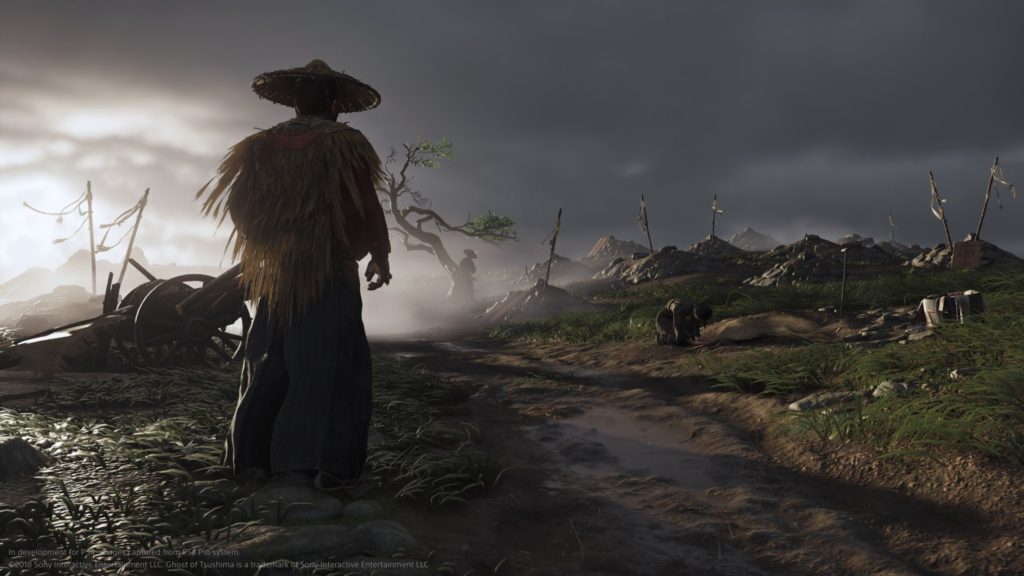 “Ghost of Tsushima is pretty as heck—sporadic capturing left me with almost 50 GB worth of screenshots and short video clips to sift through—but at its core, it’s just another open-world game. I found myself audibly sighing every time I crested a hill towards a mystery objective only to find another fox to follow or another haiku to compose. These diversions, while unique at first glance, proved to just be busy work as time wore on.” – Unscored. “Ghost of Tsushima has a distinctive aesthetic, after all, but it’s only skin-deep. The core game underneath that alluring exterior is a pastiche of open-world game design standards from five years ago; it lacks a real personality of its own. Ghost of Tsushima offers a lovely world to explore, and there’s value in that, but it should have been so much more than a checklist of activities to accomplish.” – Unscored.

“After a string of creative and daring hits, including Death Stranding, The Last of Us Part II, and Final Fantasy VII Remake, Ghost of Tsushima is something of a letdown. We’ve also seen that it’s entirely possible to take the well-worn open-world structure and twist it in some way to keep it fresh, whether that’s Horizon Zero Dawn’s imaginative setting or Spider-Man’s web-slinging, but Ghost plays things too safe…Ghost of Tsushima just doesn’t dig far enough into what makes it unique. It’s big and beautiful — but you have to have the patience of a samurai to discover what makes it special.” – Unscored.