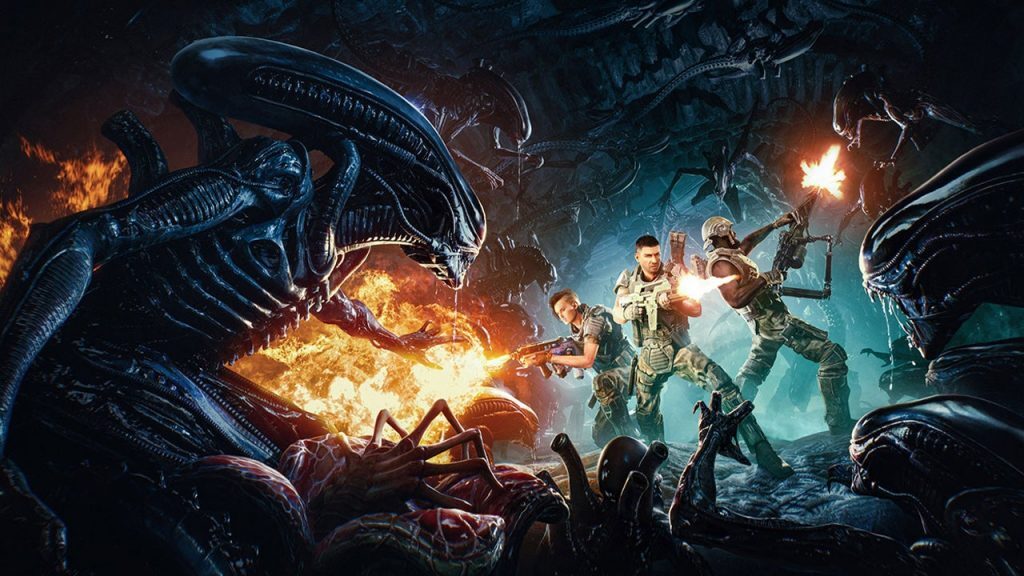 Aliens Fireteam Elite fires as many blanks as it does live ammunition. For those wanting to blast through corridors of Xenomorphs with nary a concern for plot, atmosphere or genuinely terrifying moments, it will suffice. For anyone else, well, this is just another bug hunt.

With Aliens: Fireteam Elite’s arrival, one has to wonder: exactly how hard is it to make a really good Aliens video game? This is a question that warrants asking because when one looks at the vast array of titles set in the universe of this seminal horror sci-fi franchise, the overall lack of quality seems astonishing.

Off the top of one’s head, the only games worth playing are Alien: Isolation, Aliens: Infestation and Capcom’s side-scrolling shooter from the early ‘90s Alien Vs. Predator. Other than that, you’re looking at a gaming catalogue that includes some pretty average games and some that are flat out bad.

Aliens: Fireteam Elite, the latest game to feature xenomorphs, pulse rifles and blood that burns through metal isn’t a bad game and if all you want is to burn through hordes of squealing monsters, it’ll certainly scratch that itch. But it really isn’t in the firing range of the best games this franchise has to offer.

As far as its plot goes, it’s set around two decades after the events in Alien 3, but nuanced storytelling isn’t really the point here. Essentially a group of Colonial Marines are sent to investigate a distress call from a refinery called the Katanga, which is orbiting a planet called LV-895. Once they arrive, they’re tasked with rescuing a Weyland-Yutani science wonk aboard the Katanga and since this is a game with the ‘Aliens’ logo stamped on the box, it doesn’t take a genius to guess about what happens from there.

Aliens: Fireteam Elite (hereafter abbreviated as AFT) is a three-player co-op game and once players head into a lobby they’ll either pair up with two other players or a pair of bots (skinned as androids) should no one else be around to play with. From there they’re funnelled into the action, which takes place in the gun-metal halls of the Katanga and later, the infested corridors on the planet below.

The game certainly looks the part. Everything from the Colonial Marine armour (which doesn’t look like it would stop a normal bullet let alone a tracer round), to the xenomorphs (shiny, squealing and scuttling) to the mission hub aboard the marine spaceship Endeavor(sic) (which recalls the cargo bay from the Nostromo in Aliens) is note-perfect. The score isn’t bad either; plenty of low-level atmospheric death-march between fighting and orchestral explosions with clanking percussion when the aliens arrive.

The aliens have more variation than the garden-variety from the movies. Apart from the rank-and-file drones (mainly cannon fodder), there are Warriors (upright tough sods), Prowlers (who leap from the vents and slash away at their victims), Spitters (who spit acid and explode when killed) and more. They certainly help to mix things up, but their attacks are small additions to the overall tactic used by the swarm – charge in and kill.

There is also a decent variety of weapons; players start off with a pulse rifle, a couple of grenades and a shotgun (for close encounters) but as you gain XP you can unlock a larger assortment of ordinance, some of which are class-based and some which aren’t. There are also equipment crates dotted around the different maps that gift players anything from sentry guns, drones, electric sentry guns, proximity mines and the like. They never add up, however, in conveying to players the idea that they are “the ultimate badass(es)”.

The reason for this is that the xenomorphs don’t exactly move in the same way as most enemies in TPS games, and in this case, they render the cover-based shooting offered by the chest-high walls the environments have utterly useless.

Pop-and-cover only works really if the AI enemy has the same concerns as the players about staying in cover and not getting shot. The aliens are unconcerned about this, being the primal creatures that they are, and swarm towards the players in a seething mass from every direction, using the floors, walls, and ceilings. So, it’s not long before leaving cover becomes the only option for survival becomes back-pedalling and shooting at anything that moves.

No chills, no puzzles, nothing but bullets

On top of that, the structure may keep players busy for a few afternoons, but it’s hardly going to keep them coming back beyond that. Players enter a room or a corridor, clear it of beasties and move on. The only variation on this template is that occasionally they have to activate a terminal or set up a perimeter ahead of activating a terminal as the noise it makes will draw the swarm. That’s pretty much it and it gets old after a couple of missions.

Perhaps the biggest criticism one can aim at AFT is that it isn’t frightening – not even in the slightest. Oh sure, there are a couple of jump-scares here and there, but the xenomorphs on the whole simply exist to be mowed down by gunfire. There’s no feeling of dread or crushing atmosphere that are usually components of the best Alien films and games. Really, playing AFT is about as terrifying as attending a teddy bears’ picnic.

Aliens Fireteam Elite is not a bad game, but it’s not exactly a brilliant one. Players who simply want to blast their way through an Alien-themed shooter will likely have fun, but for those who want a bit more terror and variation, ‘not bad’ is hardly a recommendation. Those players will have to wait for a new game that scales the terrifying heights of its source material. To them, AFT is just another bug hunt.