If you've never tried a percussive massager before, you might as well start at the very top. The Hypervolt Go's ability to pack a strong motor and lengthy battery into an actually-portable package makes this a gym essential that will get you a few funny looks... right until everyone sees how fast your gains are turning up.

Percussive maintenance used to be the sole domain of really confident engineers and mechanics, as well as talented (or wholly talentless) computer technicians. ‘Hit it till it works’ hasn’t been an effective tactic for anything since… well, ever, and yet, we keep coming back to the idea that punching something will eventually fix something else. There may be some merit to the idea, in some very limited ways.

Fitness company Hyperice has turned the idea of repeatedly hitting something until it starts working better into a fine art, with the Hypervolt Go being an almost perfect example of what can be achieved with enough impacts. This is a portable deep tissue massage gun, if its use wasn’t already obvious from images of the device, and it’ll change the way you exercise. No, really.

Quick on the draw The Hypervolt Go is about 40% battery and 40% motor, with the remainder taken up by the interchangeable heads that do nothing more than thwack the ever-loving crap out of sore or tired muscles. The pistol grip shape of this massage gun is where its name comes from, with the battery taking up much of the handle and the motor occupying the bit where a gun’s muzzle would be.

There’s a single button here, right in the trigger position. A long press turns on the Go, while touching it again will start the motor, with each subsequent press cycling up through faster speeds. The fourth press stops the motor, with the Go turning itself off after a few seconds of inactivity.

The base of the handle features a coloured LED that acts as both charge and battery indicator. Plug the wall charger into the Go’s base and the light changes from red to yellow to green. Use it to thump your muscles into submission and it’ll go in the opposite direction as the battery drains. The two heads — a flat section and a pointed bit — swap out in seconds. While the motor’s off, obviously. We didn’t attempt to test it in motion. That would be silly.

Don’t take it so hard 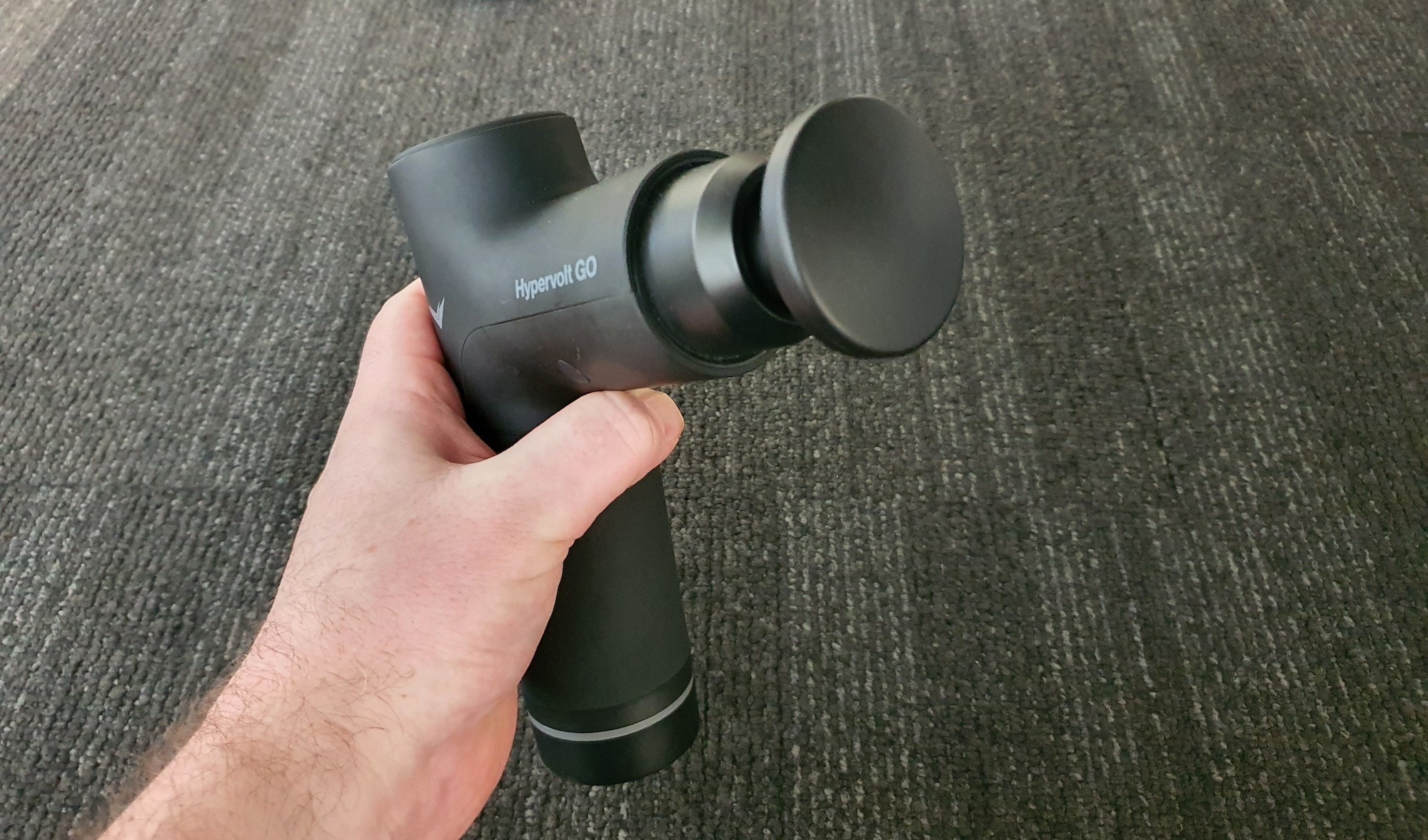 In practice, the Hypervolt Go is simple to use. It turns on, you start it moving and then press it into your muscles either before or after a workout. Preferably both. A companion Hyperice app includes various pre- and post-workout sessions you can undertake in order to get the most from your exercise, but you can also just use it as desired. You’ve got a sore spot or a tense muscle or joint? Just press the Go’s flat head in there and… well, wince. At least at first.

It’s a far better idea to stick to Hyperice’s programs, at least initially, but you’ll quickly find out what you can and can’t use the Hypervolt on. Muscle pain melts away under the force of several thousand strikes per minute (it maxes out at 3,200 impacts every 60 seconds), and muscle tension does a similar disappearing act under the Go’s tender caress*. But you shouldn’t use it on areas with excessive pain, raw or exposed skin, or, weirdly, your neck.

*Caress may not be all that tender at all. See, the Hypervolt’s motor is powerful. You may have seen massagers available at Clicks that run you between R450 and about R1,700 — those don’t hold a candle to the 40W brushless motor packed inside the Go. Press too hard on your chest and it’ll knock the breath from your lungs. Press on the back of your neck and your vision disappears. Rattle it over bone, like your forearm or the protruding bone in your shoulder, and it’ll judder and bounce like a four-cylinder engine missing on three cylinders. But it’ll also make your muscles wonder how they ever did workouts the hard way before.

And it’ll do this for about two-and-a-half hours on a charge, though the rechargeable battery takes longer than that to top up again. Since it weighs less than a kilo and even the TSA — the most uptight of the world’s airline security agencies outside of an actual warzone — will let it travel in luggage, taking it to that coastal sporting event for the weekend shouldn’t prove an issue. Odds are you’ll wind up keeping it close at hand anyway, regardless of the lump it makes in your work backpack. The Hyperice Hypervolt Go isn’t a massager. At least, it’s not what you think of when you hear the name. It’s not (immediately) relaxing, for starters. It’s a proper piece of exercise equipment, a tool that lets your body work longer and harder without suffering from the after-effects of that punishment. Muscle soreness can be limited to a dull ache or, sometimes, nullified completely, while whipping out Hypervolt’s massage gun during a workout can drive you longer than you thought you were capable of going.  At 700 grams, it’s very portable, the battery lasts long enough for it to travel with you, and it’ll let you hack your body in unexpected ways. Surely that’s worth paying R4,000 for?