The Asus Zenbook Flip is an absolute all rounder. Thanks to its internals it's got more than enough power for business and pleasure. It’s perfect for the office, for entertainment, and even for drawing and reading thanks to the 360° folding touch screen. Not only that, but the solid battery and quality build make it a portable powerhouse, and it looks great to boot. It may cost a bit more than your standard notebook, but it’s more than worth the price of admission.

You know, we tend to keep our entire lives at our fingertips at this point, what with the whole pandemic thing going on. Having become increasingly dependent on our devices over the past year and some, we’ve also realised that we need them to do more than one or two or ten things at a time. We need tech all-rounders. And the Asus ZenBook Flip 15 is an all-rounder in every sense of the word.

Now, coming in from around R30,000 this notebook isn’t going to make any “Most Affordable” lists, but that’s still a fair asking price for what you can get out of this machine. From general office or school work, to streaming, to reading, and even to audio production and gaming, the ZenBook Flip 15 and what it’s packing under the hood has you covered. To begin with, just look at this thing. Where something like the ROG Strix is exploding with “oomf”, the Flip 15 is all about subtle style. Sleek and thin, adorned with subdued but still very attractive grey accents. You’ve got a nearly non-existent NanoEdge bezel on the display, leaving plenty of room for you to mess about with the 15.6” touchscreen with a 90% screen to body ratio to boot, which makes the Full HD display an absolute joy to look at.

While it’s open, you’ll probably notice that a section of the bottom of the lower half of the Flip is a little lighter and slightly raised, with a little Harman Kardon logo to the right. Aside from simply looking good, it’s also there to help out with the laptop when it’s fully flipped. Speaking of… 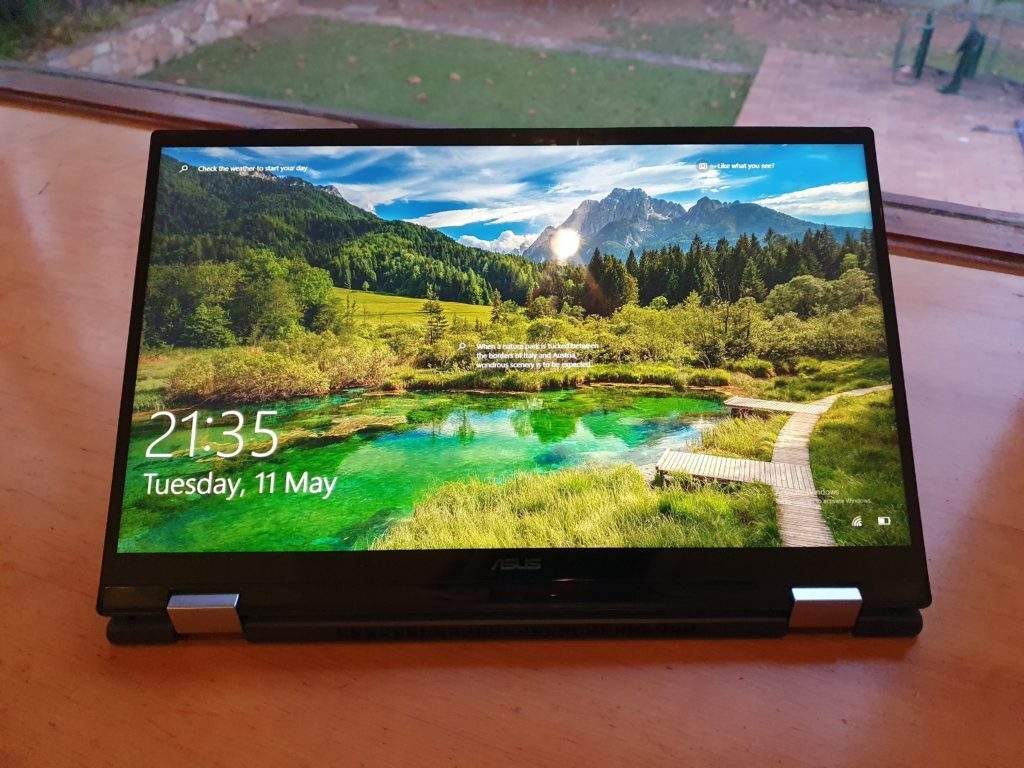 The selling gimmick of the Asus Zenbook Flip 15 is its ultra-flexible display. Thanks to a 360° ErgoLift hinge, the screen rotates and holds stable to just about any position you could want. Now, we’ve seen this before, but that doesn’t make it any less cool or useful. Keep it in a standard laptop shape for typing, flip it 180° over and lay it on the keyboard to watch a movie (the raised bump we were talking about earlier prevents the keys from being squished), or fold the entire thing over and treat it like a tablet for reading or drawing if you’ve got a stylus. Flexibility is the order of the day here. It’s more than a gimmick, too, it’s a really useful feature.

Asus promises you at least 20,000 full flips before things begin to get a little creaky, so go nuts. The Flip 15 has a military standard build, so despite its thin size, moderate weight and trick-turning display, it feels reliably solid. Beneath that subtle, though impressively gymnastic exterior the Flip 15 is packing some powerful pieces of hardware. We’re talking 11th gen Intel Core H series processor, 16GB of DDR4 RAM and up to a whole TB of SSD. This thing is fast and it makes that well known the second you boot it up. It breezes through some pretty intense tasks, like video processing and music production. The only time it really struggled a bit was when I did both of those things at the same time and had a YouTube video going in the background.

Part of the reason for the slick video processing performance is thanks to the fact that Asus has also squeezed an Nvidia GeForce GTX1650 into this machine. Now, while that’s not the kind of GPU you’d find in a monster of a gaming rig, it’s still really good. Combine that with the CPU and SSD and you’ve got yourself enough power to play most games pretty damn well. The only letdown in the gaming department is the lack of an ethernet cable, so you might want to stick to single-player titles.

As mentioned, your sound is covered by Harman Kardon, so the onboard speakers are a few notches above what you’d usually find in a notebook. Asus says the battery will last you 16 hours and that might be true for minor usage, but with all-day work or more intensive use, you’ll probably squeeze 7 or 8 hours out of it, which is fine. Ports-wise, aside from the aforementioned lack of an ethernet input, you’ve got your bases pretty well covered too. There’s a USB 3.1 port, a pair of USB-Cs, an HDMI out port for an external display, and your DC port for the charger. We would have liked to see another USB 3.1 port, but having only one isn’t a dealbreaker, particularly when there’s so much else going on.

The Asus Zenbook Flip is an absolute all-rounder. Thanks to its internals it’s got more than enough power for business and pleasure. It’s perfect for the office, for entertainment, and even for drawing and reading thanks to the 360° folding touch screen. Not only that, but the solid battery and quality build make it a portable powerhouse, and it looks great to boot. It may cost a bit more than your standard notebook, but it’s more than worth the price of admission.