The Huawei MatePad T8 won me over in the end. It's a fantastic little tablet, one that truly shines in all the areas that someone who wants a slightly chunkier device for games, series and books is really looking for. It'll run the games you want to play well, it'll allow you read everything you've been meaning to catch up on and it'll let you watch all your series on a screen that's real pretty to use. Best part, is that it'll let you do all three while on the go and never demand an excessive amount of charging. The MatePad T8 really is a rad little device.

I read a lot of comic books. It’s something I’ve said before on this website and something I feel is worth reiterating for this review. Thing is, I’m very protective over my collection of novels, graphic or not, and I prefer to keep them in as decent a condition as possible. You know what super duper sucks? Reading something where someone’s bent the spine back or spilled some kind of sauce over the words or maybe even committed the cardinal offence: Dog-eared pages. Beyond those fears, reading has just become a lot tougher these days as books seemingly become bigger and wider, making it very difficult to actually make them portable.

It’s for reasons like those listed above that I’ve begun transitioning to using a tablet for most of my reading, be it on the go or nestled up in bed. I’ve tried out quite a few, in a bid to isolate which one is most handy as both a reading device and an all-round piece of hardware. The Huawei MatePad T8 is one of the best tablets I’ve come across in a long time, so much so that it’s become my default piece of hardware as it’s used every day. It really is a magical little device. The best part about the MatePad T8 is its size, straddling the line between over-sized phone and under-sized monitor perfectly. An 8″ display with a resolution of 1280 x 800, the screen is both crystal clear at all times and large enough that you always have a solid view of what you’re working with. While nowhere near on the scale of some of its competitors, the MatePad T8 sells itself on portability, power and battery. While all three are fantastic (more on the latter in a second), the reduced size of the device made it possible to fit the tablet in a jean pocket with ease. Maybe I have large jeans (lockdown hasn’t been kind to many) but it’s rare to see a tablet make such concessions with its physical size. The MatePad T8 sizes in at 199.7mm tall and 121.1mm wide, while maintaining both solid build quality and power.

Let’s go over the other thing that impressed me about this solid chunk of equipment: The battery is fantastic. Upon receiving the MatePad T8 I charged it up to full. I’ve been using it every night for a week, roughly two hours a pop, and I’ve just needed to plug it in precisely a week since it was last charged. It’s a fantastic opportunity for Huawei to flex on the power of their batteries because the MatePad T8 was one of the most impressive I’ve seen in a while, further enhancing the emphasis on portability. Granted, reading and general internet browsing isn’t going to vaporise the battery but Huawei claims this thing can support twelve hours of video playback on a single charge and, quite frankly, I believe them. It’s all well and good talking about things the MatePad T8 was very clearly designed around, but we should also address the places were it stumbles slightly. With an Octa-core made up of four Cortex-A53 2.0 GHz and four Cortex-A53 1.5 GHz cores, it’s able to juggle plenty of tabs at once. But don’t expect lighting speeds when navigating through the device. Loading games like Fortnite Mobile and PUBG Mobile, the tablet performs…fine. There are occasional frame dips when the action on-screen gets a touch frantic but never enough to feel like it was gasping for air, begging to be put out of its misery. On a related note, I’m still not convinced that Huawei’s EMUI software is especially well tailored to a large screen. The reliance on swiping to open up menus and navigate backwards and forwards through apps feels great on Huawei phones, because it’s much easy to complete those gestures with a single finger. The larger screen of the MatePad T8 means stretching out inconvenient distances to navigate through the device.

What makes this issue worse is the decreased bezel size, which obviously makes the screen bigger and look flashier. Constantly having to swipe on the edges of the tablet to navigate means that you’ll often accidentally move back a page or close a program; not because you intended to do so but because you were holding the tablet in just the wrong place. It’s not a deal-breaker by any stretch, it’s just really annoying. Especially if you do it often enough. 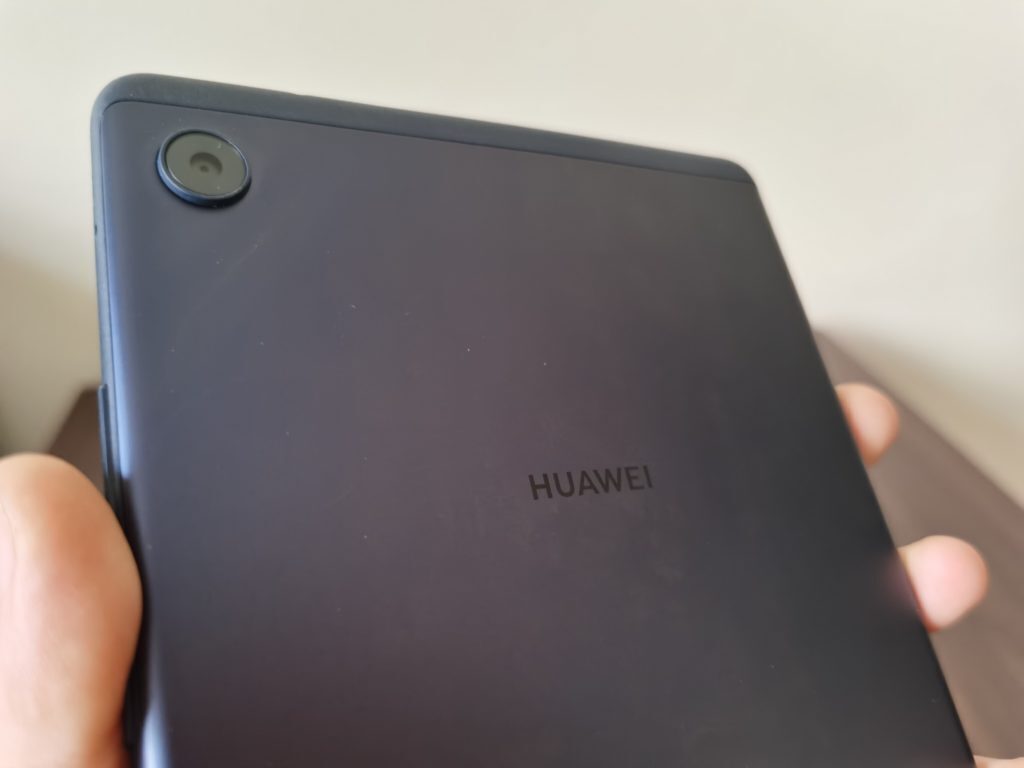 Those small grievances aside, the Huawei MatePad T8 won me over in the end. It’s a fantastic little tablet, one that truly shines in all the areas that someone who wants a slightly chunkier device for games, series and books is really looking for. It’ll run the games you want to play, it’ll allow you read everything you’ve been meaning to catch up on and it’ll let you watch all your series on a screen that’s real pretty to use. The best part is that it’ll let you do all three while on the go and never demand an excessive amount of charging. The MatePad T8 really is a rad little device.