Name three current smartphones that arrive with a stylus in the box. Odds are there’s only one that jumps to mind — Samsung’s Galaxy Note, of which we’re on the tenth version. Just for the record, LG also makes a stylus-toting smartphone. It’s just a mission to obtain in South Africa. The point, though, is that Samsung’s Galaxy Note 10 (and the Galaxy Note 10 Plus we’re testing here) is the phone of choice for a surprisingly large number of people.

As far as phone hardware goes, the Note 10 Plus is pretty unique. We’re not seeing Xiaomi or Huawei or OnePlus creating clones of Samsung’s Note series. Apple hasn’t come out with an iPhone Stylus Edition. LG’s attempting to get a seat at the table but… well, we saw how that’s working out in the first paragraph. You didn’t know their stylus-phones existed, remember? Long story short, Samsung has a built-in market for their annual, oversized, tech-packed smartphone. Note fans are gonna buy it, because it’s the only Note in town — no matter what Xiaomi wants you to think. Samsung, technically, doesn’t have to try any more. Has that made the South Korean company’s grip slip? Let’s find out, shall we?

We miss the flat Note 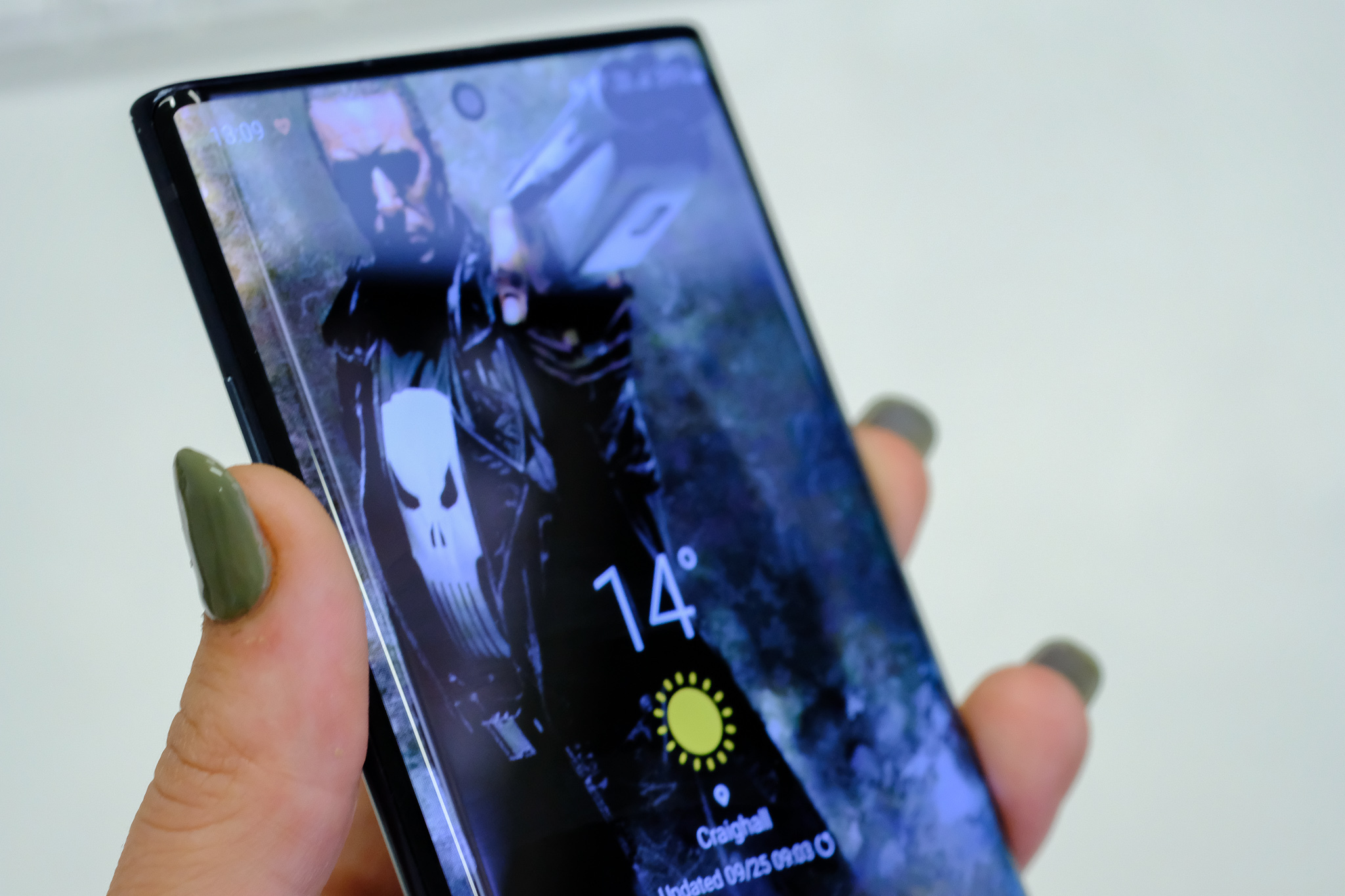 Samsung’s devices have been recognisable as hell of late. From the launch of the S8 and its Infinity Display right up to the present day, you can tell that the phone you’re holding belongs to Samsung. Actually it belongs to you (hopefully) but Samsung made the freaking thing. Which is all fine and dandy but telling the S8, S9, and S10 apart is a little more difficult to do. The same thing applies with this year’s Note 10 Plus. It’s easy to tell that Samsung’s made it but where it fits in the hierarchy is a little less clear at a glance.

And that’s because the S-series design language is fully evident here. Samsung’s gone for a curved glass front and back, just like the S-series flagships. We’re not fans, for two reasons. You already know the first one — if not for the Note 10 Plus’ 6.8in size, it’s pretty easy to mistake for most recent Samsung flagships. And if you’re not going by size, you’ll have to pay attention to the physical buttons available (fewer than usual — just power and volume) or the bottom-right S Pen port to make sure it’s a real Note. And the other reason we’re not thrilled is the S Pen. Samsung’s Note series stands out because of the stylus but the curved screen leads to some… slippage. A flat front panel would have made S Pen shenanigans even easier to execute than they are at present. The Dynamic AMOLED screen is mighty pretty. It’s just not wholly practical.

Pretty on the inside Samsung’s high-end handset isn’t just a pretty face, though. The most powerful smartphone in Samsung’s stable — but not the most powerful device on the market today — the Galaxy Note 10 Plus combines the company’s own Exynos 9825 processor with 12GB of RAM and 256GB of storage. That’s before you augment internal space with a microSD, but you’re probably not going to do that. Unless you take photos incessantly, that is. There’s a 4,300mAh battery in the handset which keeps it up all day (and at least part of the evening). With heavy use you’ll be returning to the charger daily but you might squeeze almost two days of uptime out if you’re not streaming a whole bunch.

The 6.8in (1,440 x 3,040) display is one of the items that sets the Samsung Galaxy Note 10 Plus apart from the stock Note 10 (which has a 6.3in 1,080 x 2,280 Dynamic AMOLED screen, instead). The other differences? The stock Note 10 only has 8GB of RAM and no 512GB edition. It’s rocking a smaller 3,500mAh battery but the camera tech is identical across both devices. And both are lacking a 3.5mm headphone port, so much for using your old cans. At least Samsung provides some wired USB-C AKG earbuds in the box. And a plastics clear case — it’d be an awful shame if we were to kill yet another Samsung flagship by dropping it, after all.

Numbers may lie (but these don’t) Samsung’s latest is also its greatest. Android 9 Pie running on Samsung’s One UI with this set of hardware is quick. Very, very quick. In fact, we didn’t see evidence of slowdown anywhere during our review period. Games, multiple apps, streaming Spotify while playing a game, mucking around the stylus and camera… the slowdown isn’t visible to the naked eye. We could’ve just kept loading apps till the 12GB of RAM gave out but we ran out of apps first. So it was off to the benchmarking software to see whether they had anything to say.

This time around we used Geekbench 5, Antutu, and 3D Mark’s Slingshot Extreme graphics test — smartphone testing is looking more and more like the heyday of PC benchmarking. The numbers were, expectedly, impressive. A run through Geekbench 5 popped out a single-core score of 824 and a multi-core core of 2,252 — the latter of which seemed a little low to us. The single-core numbers put this device above the S10 in terms of power, while the S10 edges it out in terms of multi-core numbers. Antutu returned a score of 349,134 – those numbers are no slouch at all. It puts the Note 10 Plus in the region of the top most powerful devices on the planet. The phones that beat it? Dedicated gaming phones like the ROG Phone 2 and Xiaomi’s Mi Blackshark 2, among other power-devices. A brief trip to 3DMark-Land and we returned with scores in the region of 4,900 for Slingshot Extreme. Specifically, 4960 for OpenGL ES 3.1 and 4890 for Vulkan. Those numbers put the Note 10 Plus in the top 2% of mobile devices, in terms of graphics processing.

Get it right on the night

Samsung’s camera on the Note 10 is… about what we were expecting from this one. And the Plus, since they’re both rocking the same optical bits. If you’ve used the S10+, you’ve got some idea what to expect from the Note 10 Plus. That is, competent-to-impressive performance across the board… with a couple of bothersome bits thrown in.

Samsung’s cameras are good. They’ve been good for a while and it doesn’t feel like Samsung’s done much upgrading here. The main sensor is still the most versatile of the lot (it’s that variable aperture that does it) while the ultrawide and telephoto options offer options when it comes to your target. Snap it at all the ranges. It doesn’t take much effort to swap between the modes, after all.

Detail is great, though you’ll see some noise creeping in as your surroundings get darker. Samsung’s low-light performance means that it’ll take some time to get to this point. Both Google and Apple’s low-light wizardry are better than Samsung’s here but the South Korean company’s hardware offer a good showing without resorting to quite as much software trickery as the competition. Optical performance is what you’d expect from a R23,000 smartphone but we were expecting… well, better. But the camera’s not what we came here for.

Taking a trip to S Pen Remember how we pointed out that Samsung’s Note series is pretty unique, as phones go? That’s because of this little guy here — the S Pen. Nominally a stylus, albeit one that lives inside your smartphone, the S Pen has a few new talents for 2019. Pop the Pen out and you can scribble on the screen without unlocking it. Handy for those times when you’re in a hurry. Perhaps you need to note a license plate before it drive away. Samsung just wants you to write things down as easily as possible.

To that end the Note 10 sports handwriting recognition, a feature that works fine out of the box. But teach it to recognise your handwriting and you can scribble notes, tap a button and have it converted to the story of text everyone can understand. Not just your dear old mom. That’s very much a nice-to-have, especially for the compulsive note-takers.

But there’s also a little something called Air Actions, which uses the S Pen’s new internal gyroscope to use the stylus like a little magic wand. You can control certain apps, activate your camera shutter, swap between photo mode, even navigate at a distance. As to whether you’ll ever use this function… we reckon it’ll mostly see use as a demonstration for other people. And once you run out of folks to show off to, we reckon you’ll stop playing with Air Actions altogether. It’s a cool feature, but not an essential one.

You might use AR Doodle a little more. Just a little. This is a feature that lets you scribble on an actual, living person (as seen by the phone’s camera) and have those scribbles follow the person around for a time. Again, as seen by the Note 10 Plus’ camera. You know, dodgy eyebrows or neon pupils or something. Again, this’ll likely be used to show off a little and may make an appearance or three on social media before being relegated to the list of ‘stuff my phone does that I don’t play with’. But the S Pen is as cool as ever. It’s just got a couple semi-useless talents to fiddle with, too. Is Samsung’s Note 10 Plus an essential smartphone? If you’re one of the folks in love with the oversized handset and its attendant stylus, you didn’t even need to see this review. You were gonna buy it anyway. But if you’re still using the Note 9 or if you’re a member of the S10 family already, the Note 10 becomes less of an essential buy. The look and feel of the Note 10 brings to mind the S10+ rather heavily and, unless your heart is set on that S Pen, it’s fine to stick with the (slightly) older handset. Yes, the Note 10 Plus is powerful and attractive and versatile and pretty bleeding expensive but if you’re not after the stylus and an extra 4GB of RAM, you can scale your ambitions back to the stock Note 10. Or the S10.+ Or the Note 9. They’re all good phones, Bront.

The Samsung Galaxy Note 10 Plus combines the company's own Exynos 9825 processor with 12GB of RAM and 256GB of storage. That's before you augment internal space with a microSD, but you're probably not going to do that.