And it’s official. Samsung’s Galaxy Fold folding smartphone will be touching down in South Africa from 18 October, though you’re going to have to pre-order it. Samsung certainly wants you to, since it’s opening pre-orders tonight. And the money you’re going to have to lay down? R44,000. That’s a fair bit more than the pre-tax pricing in the States but you may find yourself convinced once you get your hands on one.

Good luck with that

However, you may have your work cut out for you. We’ve heard that Samsung’s got limited numbers of the Galaxy Fold available globally, so don’t expect to encounter many in-store demo models. Unless that is, they happen to be non-functional shells designed to show off the Fold’s weight and feel. Even that might be enough to convince you to put down some cash for one of these. Samsung’s folding phone, despite its earlier issues, feels far better than we were expecting it to.

Samsung’s handset brings to mind older clamshell phones, oddly enough. Not that the design is dated or the phone looks bad — it’s more about how the phone feels. Older phone fans will remember the bulge those feature phones left in their pockets. This is a similar feeling, coupled with Samsung’s current design language (there’s a lot of the S10-series in this one) and a lot of interesting tech. Watching an app switch from the front display to the folded-out inner screen probably won’t get old for quite a while. Be that as it may, we also reckon this one’s mostly for the folks who must have the latest innovations on their person at all times. You know, boardroom types with the cash to spare, or influencers out to do some serious influencing. The Galaxy Fold in-hand doesn’t feel like a first attempt at a folding phone, for all its teething trouble. Samsung’s added bits and pieces designed to keep the Fold’s screen safe for as long as possible but it’s still a flexible display that can fold in half. Things could go wrong and, at just under R44k a pop, that could prove expensive.

Still, our early handling of the device makes us fairly confident that Samsung’s got the Fold rather neatly squared away. The hinges feel solid and there doesn’t seem to be too many ways to muck it up during normal usage. Sure, you could break it by forcing the (rather solid) hinge backwards but the same thing works on a bathroom door. You’re not special. 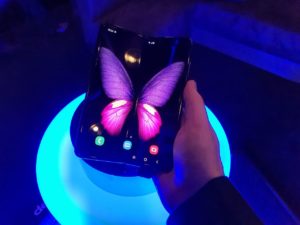 We’re sure folks will find ways to damage it, but that’ll have more to do with the fact that it’s a smartphone than because of the fancy screen. Jam your smartphone into a pocket with a set of keys to see just how fragile a regular phone is. And you wonder why Samsung’s asking you to take special care of this one. It’s not just about the price tag, it’s something all-new. But perhaps we’ll be seeing this form factor stick around for a decade or two. We’re certainly keen on seeing the next generation, something that Samsung’s definitely working on. Because duh.

Convinced? Head to Samsung’s site to preorder the Galaxy Fold. The first batch will actually land in South Africa from 14 October, well ahead of its initial timeline, and those will head off to folks who’ve pre-ordered. If you miss the pre-order, there may be handsets generally available from 18 October. Samsung’s only bringing in a finite amount, so if you’re keen, act now. For now, though, we’re dying to get a full review of the Galaxy Fold up. Watch this space, yeah?