Now that South Africa is one of the first countries to adopt 5G tech, we better start playing catch-up in terms of other hardware that isn’t available here yet. Which is why we got our hands on the Google Nest Hub Assistant. Yes, you can now get Google’s assistant hardware locally, and we’re amped.

While the rest of the world is busy reviewing the Nest Hub Max (the latest device from Google’s Connected Home series), we’re just entering the connected home market in South Africa. And it feels good to know Saffas can enjoy the comfort of home assistance that doesn’t require an entire monthly paycheck…

To bring you up to speed, the Google Nest Hub is the evolution of Google’s Home smart speaker. This time, the speaker gets a touch-screen display added to the friendly virtual personal assistant.

As easy as… just buying one

One thing we’re not accustomed to when it comes to smart home tech, is usability and easy set-up. Inside the minimalist packaging, you’ll find the device, a power cable and a small set-up booklet. Setting up the Nest Hub is one of the simplest tasks we’ve ever undertaken. Especially if you’re packing an Android phone that is already connected with your Google account. You will need to download the Google Home app on your Android or iOS smartphone to set it up. If you are already using it, you just add a new device on the app. This will initiate a search via Bluetooth, which will find your device and prompt you to add it. Expect to be prompted for information such as the name of your home Wi-fi network, as well as the name of the room you’ll keep your trusty assistant.

The Nest Hub is powered by a bundled adaptor which is… not particularly long. So you’ll need to find a good spot close to a wall plug for set-up. Keep in mind that the assistant needs to hear your voice, so don’t position it in a far-off corner of the house.

The centre of attention

When it comes to size, the Nest Hub has a small but practical 7in touch screen mounted on a speaker base. We get why Google opted to bring out the Nest Hub Max, as the screen just feels too small to consume content on. It’s got Chromecast built-in, so you can cast content from your phone to the Nest, but we won’t recommend it. Another small snag — you’ll need a Chromecast-capable TV, otherwise, you’ll have to buy a separate Chromecast device to get the most out of your Nest Hub. A Chromecast allows you to connect the assistant to your TV and prompt it to display specific content to the far larger display.

Worried about Google spying on you? Unlike the Nest Hub Max, there is no camera installed. It’s also fitted with a slider switch along the back that lets you turn off the two far-field microphones. Volume control buttons can be found on the back, though it can also be adjusted with your voice or the touch screen.

Give it to me, baby

One of our biggest concerns was the Nest Hub actually understanding our lovely Souf Efrican accents. But to our surprise, voice recognition was stellar with the Nest Hub. In fact, language recognition in English seems even better than we normally get on the Android voice assistant. With real-time typing along the top of the display while you’re speaking, you can see how the assistant corrects inaccuracies. If there is one weakness, it may be the Nest Hub’s inability to pick up verbal commands when more than one person is speaking, or when there’s some noise in the background. This can happen more often than you think with the device’s sensitive far-field microphone. So we’ll recommend turning off TVs or shutting up bickering siblings before talking to Google. Our robot overlords prefer silence when you’re talking to ’em.

Interestingly, the speaker on the Nest Hub isn’t all that bad at all. Listening to podcasts in the living room or news snippets in the morning is fine on the on-board speaker. We preferred to connect it to a soundbar when listening to music, though. One of our favourite features, surprisingly, is the built-in sensor on the front that senses ambient lighting and automatically dims the screen to an appropriate level. It will even tweak the warmth of the colour display by default, which makes pictures look hella good.

Speaking of photos, you can set the device to function as a photo frame, which will see it scroll through a continuous slide show from your Google Photos account. This allows it to show the most recent pics from your account without any manual uploading. It gives the Nest Hub a more ‘homey’ feel and it doesn’t look like a random piece of tech on your TV cabinet. You can either select specific albums or make use of Google’s AI tech to pick photos from a “curated album” containing selected people. To use the curated list, you will need to make an initial selection from a list of headshots automatically generated at configuration time – only photos of people you shortlist will show up on the slide show.

Obvs, you’ll get to use some rudimentary controls such as setting alarms and adjusting the brightness and volume by talking to the assistant, or swiping your finger up from the bottom edge. Swiping down from the top brings up several short cuts, including the ability to access predefined “Routines” where you can link up multiple actions that will happen in sequence when prompted. 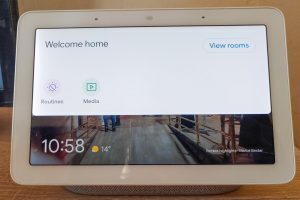 Ideally, you’ll need to pair the Nest Hub with more Google Home devices, especially if you have a large house. This will give you the ability to control Google from anywhere, and even allow you to broadcast an audio message to other Google Home devices in your house.

We have been waiting too long to get some Google Assistant hardware in South Africa, and we cannot wait to kit out our whole house with multiple of these little dudes. As the range grows, you’ll have the ability to control just about every aspect of your home. With the Nest Hub and a Chromecast-enabled TV, you can simply ask Google: “Play Brooklyn 99 on the TV,” and the assistant will automatically launch Netflix on your TV and play the chosen show. The same is true for YouTube, Amazon Prime and Showmax. If you plan on installing a smart security system, like Ring — you can seamlessly connect it with the Nest Hub.

The connectivity possibilities are endless (the more assistant tech becomes available here). But it also depends on how deeply embedded you are in Google’s ecosystem. If you’re an Apple fundi, we’ll suggest trying to get your hands on an Apple HomePod and integrate using Apple’s HomeKit instead. It’ll cost you more, though. We’re not saying a smart home is for everyone though. You’ll need to be very patient with technology and AI systems. Google Assistant won’t necessarily get you the first time, and there are certain phrases it just won’t recognise. You need to understand machine-led natural language tech still has a long way to go. But as far as understanding human language goes, the Nest Hub is one of the best we’ve encountered.

On to the availability and price — you can buy the Google Nest Hub for R2,900, which seems like a good deal for this little gadget. If your TV doesn’t have Chromecast built-in, a Chromecast device will cost you an additional R800. Considering the Chromecast will essentially turn any basic TV into a smart TV, that’s an absolute steal.

The Google Nest Hub is the evolution of Google’s Home smart speaker. This time, the speaker gets a touch-screen display added to the virtual personal assistant.