If there is one thing to complain about living in South Africa — it’s the total lack of affordable EVs. Yes, we’ve got the modern BMW i3, the sporty i8 and (our fave) the Jaguar I-Pace. But you need to save R10 a day for 180 years to afford the cheapest of the lot. Now it looks like Volkswagen’s on track to bring ‘more affordable’ EVs into the world.

The Volkswagen ID 3 debuted at the 2019 Frankfurt Motor Show this week. No, we don’t know whether it’ll come to SA (yet), and it’ll only be available in Europe for the time being. It’ll come in three variants: the basic ID 3 1st, 1st Plus and 1st Max. All three 1st Edition cars boast a 58kWh lithium-ion battery, which is good for 420km, but the higher-specced Plus and Max trims will have upgradable ranges.

Just… look at it

After the 1st Edition subsides, the standard ID 3 will offer a 45kWh battery that has an estimated 330km range, or a 77kWh battery with an estimated 550km range. That’s impressive considering the size of the ID 3. The Jaguar I-Pace has a range of 470km — and that’s just about the max of the available EVs in South Africa. 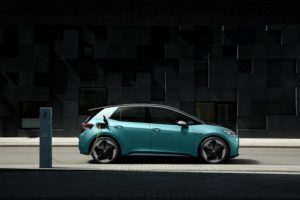 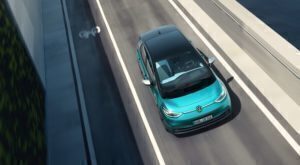 We’re hoping to see the Volkswagen ID 3 in South Africa in future. Even though Eskom reliability isn’t up there with the rest of the world, we believe the adoption of EVs has a good effect on the environment and the advancement of technology.

Volkswagen plans to price the base ID 3 at under €30,000 which (with the current exchange rate) works out to around R500,000. The first ID 3 models will hit German roads in mid-2020. By then, we would be lucky to have a choice of five electric vehicles in our market. We can dream, though.