There’s something about having a camera handy at all times. Try sticking a dashcam in your car at some point and see how you feel when people drive like lunatics. You may not be able to change their behaviour but at least you know your insurance company knows whatever happens next isn’t your fault. The effect is… pretty similar when you set up an IP camera in your home. Sure, you may wind up with a recording of a burglary on your smartphone but at least you know your insurance company will pay out. Unless that is, the footage also shows that you left your door unlocked.

But if you’re not convinced, then you don’t really want to lay out a whole mess of cash for an at-home sentry-cam. Budget options like the UltraLink eSmartCam, which retails for between R800 and R1,100, are a dandy way of testing whether remote monitoring of your home and precious stuff is for you. As a bonus, the UltraLink eSmartCam doubles as a pet cam or a baby monitor — though you might want to skip the included bedtime stories and singalongs. Trust us on this — you’d rather not experience those bits for yourself. The UltraLink eSmartCam is, in appearance, a little like the now-defunct Jibo robot — though it’s not nearly as intelligent as the lamented home assistant. The build is all hard plastic, with very few soft spots in evidence. We know this because we nearly destroyed the eSmartCam during the review. It dropped onto a brick driveway from a height of about 1.2 metres and promptly came apart. It was the work of a few seconds to reassemble it and it survived its brush with Stuff brutality enough to perform the rest of the review. The lesson here, as with all the other tech you own, is: don’t drop it.

The camera sensor is centrally situated in the black centre orb, while the sound is taken care of by side-mounted speakers that look a whole lot like insectile ears. The V-shape on the front looks like a shirt, and there are a minor set of physical buttons to fiddle with. It’s all very humanoid-ish. Kinda. At its base, the eSmartCam has a threaded hole, in case you want to mount it somewhere a little more securely. There’s a plastic, adjustable wall-mount in the box as well, in case you’ve got something a little more permanent in mind. There’s space for a microSD card if you’d like a little internal storage (up to 120GB of it, if you like), but the UltraLink app will also try and sell you a subscription for cloud storage. Whether you pay for that is up to you, though. We found it optional during review. 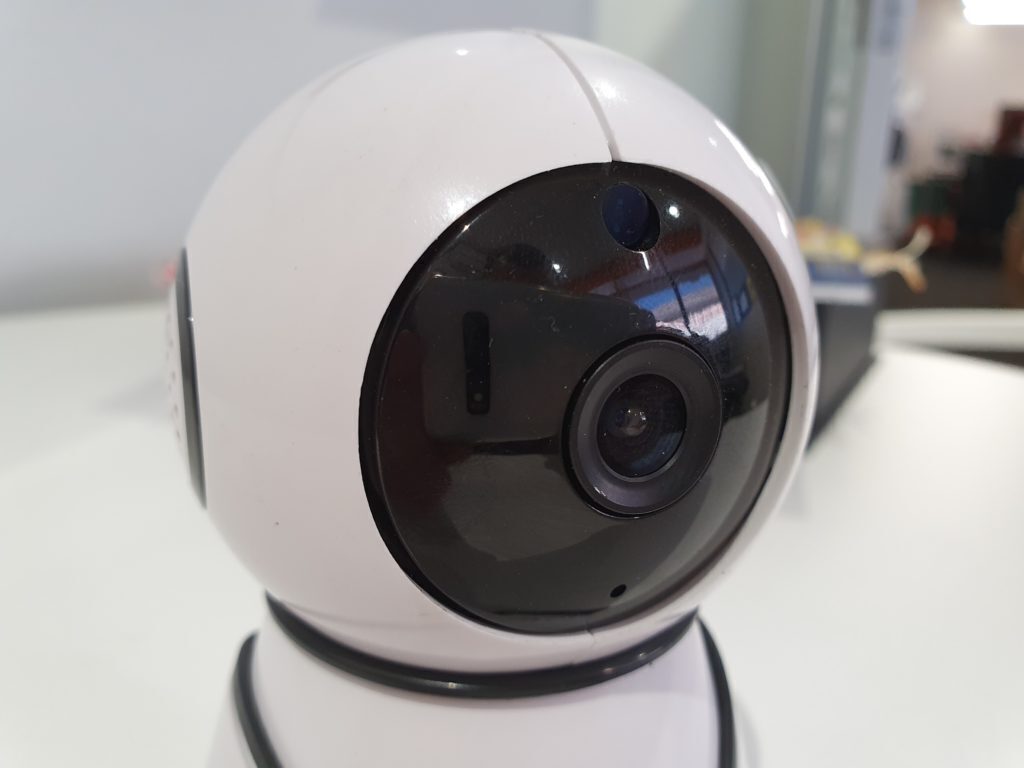 Setup of the eSmartCam took a little longer than we would have liked. This has a little something to do with Stuff not reading the instructions (heavens help us if we’re ever allowed to play with a supercollider) but it’s also the UltraLink’s dislike of 5GHz networks. At Stuff Towers, we rock both 5GHz and 2.4GHz wireless bands and setup was a chore. We took this cam home to a less finicky network and, barring a slight hitch that was fixed by closing and reopening the app, setup was a breeze. Right after we thought we’d killed the camera too.

It’s during setup that you’ll be prompted to sign up for UltraLink’s cloud storage services. The service makes sense, especially if you’re the paranoid sort. Your recordings are hosted on the camera itself, so if someone were to break into your home and then wander off with the UltraLink, you’ve lost the hard copy. At best, you’re left with snapshots sent before the device goes dark. But committing to the service isn’t a requirement if you’re more after peace-of-mind (of a sort) or are just keeping an eye on your pets or the kids at home. A microSD is fine, but you can also make do without it. Just… watch your home through the app, as we did.

Pay no attention to the Lego behind the curtain

The light…. hurts my eyes

The app isn’t exactly a pinnacle of design, though it’s still fairly easy to navigate. We’d have liked a slicker, more attractive UI but that’s asking a bit much of a budget piece of hardware like this. It’s functional and almost utilitarian, but you shouldn’t get lost at all. At least, until you start exploring the options to two-way communication and find those stories and pet-trainers. Yup, those lurking here. Don’t use them. They’re awful. But you can chat to your cat at home, through the app. Now your feline can ignore you from greater distances than were possible before. Now that’s progress.

Like all IP cams, the response you get from the app depends largely on the internet connection you have handy. If your home internets are sluggish, your offsite response will be too. The camera sensor is only a 720p effort, which isn’t ideal. We’d have preferred 1080p, obviously, but the 720p isn’t bad. It’s especially effective at night, which is something we weren’t expecting, and the smaller sensor making this easier on your internet connection. The app will handle fine at speeds of 4Mbps at your source. It’ll also push movement notifications to your phone — those work rather well, as does the camera’s motion detection.

If you see this screen, you’ve gone too far. Go back!

But if you’re not one for automation, there are options to manually control the UltraLink eSmartCam. There’s complete manual control and then there’s the option to set the camera in motion, Cold War-style. The camera can set to pan left and right, or you can set it to tilt up and down. The first is great for keeping an eye on a wider area, while the second provides detailed coverage of an entryway. Just make sure you know what you want to watch before your start drilling permanent mounts into the walls. If you’re looking to add an electronic sentry to your home, UltraLink’s eSmartCam is a feature-rich, if budget, option. It’s fairly unobtrusive and just anthropomorphic enough that you’ll like seeing it around. Or it’ll creep you out, so if the images with this review are making your skin crawl, skip it. We doubt that’s the case, this is a friendly little fella — even if he has his faults. Connectivity issues if you’re running a 5GHz wireless network and a 720p camera sensor are the main items here but night-time performance and the price tend to make up for it. Just… don’t let it read any stories to your little one (human, dog, or cat) until you’ve previewed those yourself. There wasn’t a budget for those extras — you’re better off reading that bedtime story yourself, from the office.