At Stuff we get our hands on the latest and greatest tech. That sometimes includes items that are… weird and wonderful. Items like the latest 3Doodler Create+, that spits out melted plastic rods, allowing you to draw in the third dimension. Yeah, sketch-pad. You’ve been replaced.

What no-one tells you, though, is that it’s much harder than you’d expect. Until nursery school teachers begin teaching youngsters to use these tools, adults won’t (all) have the ability to draw in 3D. Please don’t actually give these to children yet though — we burnt ourselves with the hella-hot extruder tip… more than we’d like to admit). Probably the most unsatisfactory part of drawing in the third dimension is how unsteady the human hand is. When a palm is resting on a flat surface (as in 2D drawing), everything is stable. Once the operation moves into the air, everything we like about gravity and physics goes out the window.

Luckily for our shaky hands, the 3Doodler pen is small enough to hold comfortably, and the outer casing doesn’t heat up too much. Steer clear of that tip straight out of the seventh layer of hell, though. When extruded plastic gets tangled around the tip, make sure to use the closest tool you can find and remove it with that. Your fingers don’t count as a tool, unless you’re opening tight jars. No touchy! 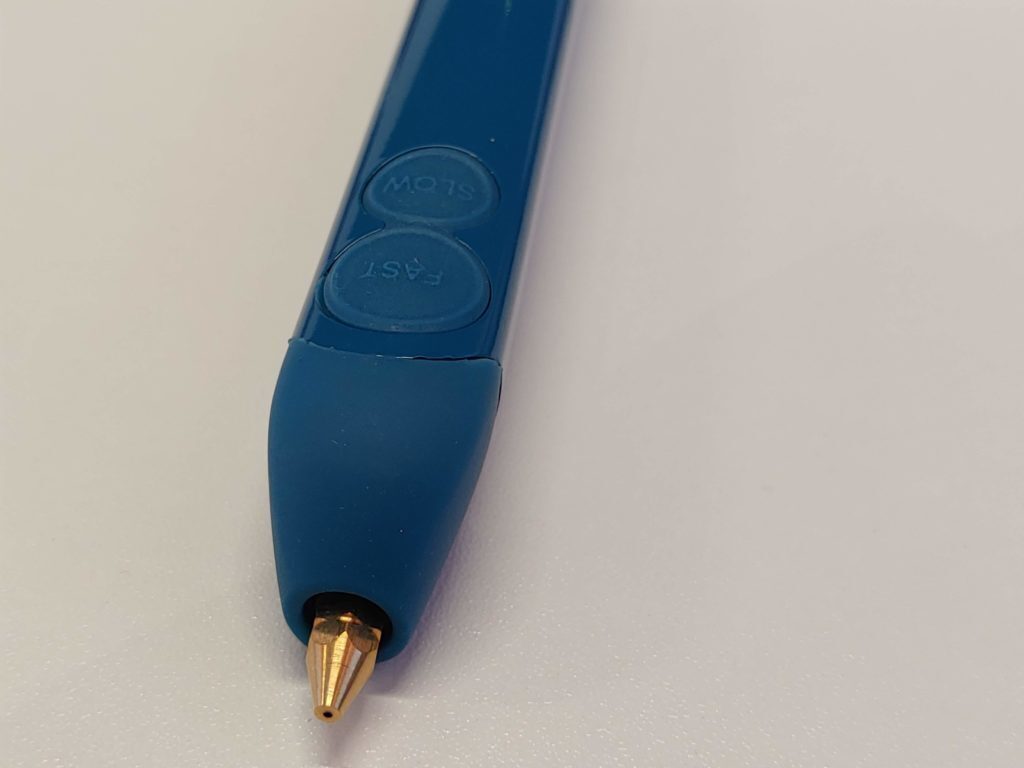 So, what do you make with a 3Doodler and seemingly unlimited amounts of filament? Cover your brand new LG G8s with it (there’s a G8s review coming soon, btw). And, in the process, create the most beautiful, practical and innovative phone case anyone’s ever seen. /snark.

Step one is getting the plastic to extrude without sticking to the tip. This is probably the hardest step after finally getting the darned thing to extrude. You’d guess in an office filled with techies this wouldn’t be as much of a mission. You’d guess wrong — a cold extruder is a finicky extruder Protip: Begin with a little blob on a rubbery surface (like the smartphone cover provided by LG for the G8s) rather than a desk or paper. Once it’s heated up correctly, obvs.

And presto! We started crafting our majestic AF phone cover, over the existing phone cover. You have an option to extrude filament at ‘fast’ or ‘slow’ settings. We found the ‘slow’ to be too slow, and the ‘fast’ to be too fast for our taste. But actually, it could be we’re just talentless at this whole creator thing. Controlling extruded plastic is surprisingly hard to do, hence our Spidey-influenced design on the back of the cover. We managed to leave openings for all the ports, buttons and sensors, but still managed to do a terrible job at that. Still, it was completed and the chaps over at 3Doodler offered to give us a few tips for later projects.

We spent time with the 3Doodler Create+, which features a new dual drive system (that whole fast/slow thing), while the more readily-available Create isn’t quite as feature packed. The 3Doodler Create is available from Incredible Connection for R1,300, and this set includes 50 strands of filament. You can even get a Star Trek-themed 3Doodler Create from Takealot for the same price. And if you need to get your hands on more filament — because you’ve wasted all of the supplied ones on useless blobs — it’ll cost you R300 for 100 strands from Takealot.

As for the improved 3Doodler Create+? The one that did all this ‘work’? We’re expecting some official pricing shortly.

So, what’s the moral of the story? Get a professional to make you a custom phone case. Or better yet, buy one. But if you’ve got a steady hand, give the 3Doodler a shot. You can’t possibly do worse than we did.