When humans create a vehicle, chances are someone’s going to race it. That’s what happened with drones, giving us yet another career that we’re not going to be able to compete in. Although, the option to practice for drone-racing greatness is easier than ever now that DJI has launched a first-person view (FPV) headset for pilots that has a mere 28 milliseconds of latency. 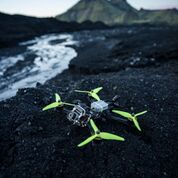 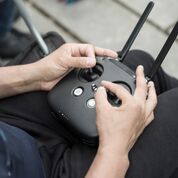 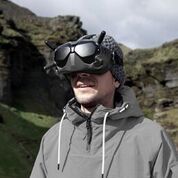 “As drone racing grows in popularity, FPV racers are looking for the next technology to keep up with their demands. The new DJI FPV System was designed using our vast experience creating aerial and ground transmission systems and offers technology truly unique to the market,” says Ferdinand Wolf, creative director at DJI Europe. “As the only digital video transmission solution on the market that performs at the same level as analogue, even surpassing it in some aspects, we hope to set a new standard for digital FPV.”

The end-to-end latency is 28 milliseconds. That’s almost half of DJI’s previous speediest spec of 50ms, and the stream is 720p footage at 120fps. Wanna show your buddies your insane cornering skills? The FPV system can record on both the FPV camera attached to the drone and the dedicated goggles using a microSD card. Content can be captured in 1080p at 60 fps, or 720p at 120 fps, while the goggles can record 720p at 60 fps, which can be instantly played back and saved.

Read more: Think you have what it takes to race FPV drones? Think again

In the box, you’ll get the FPV goggles, an air unit transmission module, a remote controller and an FPV camera. You’ll also have the choice of three modes — racing, standard and LED (for low light) — and all of these can transmit to eight 5.8GHz frequency channels, allowing up to eight drones to fly simultaneously under one system.

The DJI FPV System is available in two purchase options, the FPV Fly More Combo for $929 (around R13,600) and the FPV Experience Combo for USD $819 (about R13,000). It’s pretty expensive, but we think if you can afford to race a winged little machine, you’ll likely be able to afford the FPV system.