Just as you think you know what gaming laptops look like, Acer goes and flips the standard design on its head. The company’s monstrous new Predator gaming laptop is called the Triton 900, and it brings some interesting (albeit not always super useful) features to the world of RGB and sharp-angled design.

The Triton 900’s standout feature is the giant 17.3in display that sits on a hinge which allows it to be flipped around. This means you can move the display to show the noobs on the other side how they should be gaming. Problem is, then you won’t be able to see what you’re doing. Or, you can flatten it out into tablet mode which turns it into a gigantic touchscreen. We don’t see this being super useful for gaming purposes. But… designers will absolutely love it.

Yeah, despite the obvious-gaming-focus design, the Triton 900 could be ideal for designers who need some extra oomph. Considering the Acer ConceptD 9 isn’t coming to SA (for now), this might be the machine to add to any designer’s wishlist. Why? Well… It packs an Intel Core i7-9750H, an Nvidia GeForce RTX 2080 GPU, 32GB of RAM and two 512GB SSDs. Those are hefty gaming specs but they’re also more than enough to keep the Photoshop-happy er… happy. What you need to decide is, do you want your 17.3in laptop to sit comfortably on your lap? Or do you want a fancypants swivelling display? If you’re not that concerned with the swivel, you’re likely a gamer. Even if it’s quite the eye-catcher.

The Triton 900 is an absolute tank of a thing. The 4kg laptop has an entirely metal chassis (the lid and deck are aluminium, the bottom is a magnesium alloy). The lid, like the rest of the laptop, is dark-grey-to-black and is embellished with the silver Predator logo. Obviously, the lid is fitted with the hard-to-miss hinges, which Acer has dubbed the Ezel Aero Hinge. The hinge’s arms flank the 17.3in 4K G-Sync display, so it can do its signature swivel. It can be pushed right behind the RGB keyboard or laid flat into tablet mode. If you’re using a controller, you can flip it around so the keyboard isn’t in the way.

We’ll admit it’s a pretty cool design to show off to your friends, but in terms of functionality, it’s questionable for a gaming laptop. If you’re a creative, perhaps using the laptop for some hardcore editing using the touch-display, tablet mode could be of some use.

The keyboard is located on the very front of the deck and would have been much more hand-friendly if the Triton came with a wrist rest. The touchpad is to the right with a pair of click buttons. And a touch-sensitive toggle turns the touchpad into a touch-based number pad. Even though it’s not the most comfortable keyboard setup we’ve used — there is good reason for the design. Moving the keyboard has made extra room for cooling. There are some vents above the keyboard’s macro keys, as well as a dark-tinted window that shows off some of the heat pipes and a fan, which has lights that can be controlled in the PredatorSense app. So again, some cool stuff to show off to your friends, but nothing that’s going to make you a better gamer, necessarily.

Acer calls the keys on the oddly-positioned keyboard ‘mechanical’, though we don’t know which switch is actually used. The keys offer a satisfying click, but they feel quite deep when typing. But this machine was not made for typing, so we’ll give that a pass. 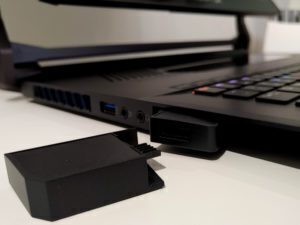 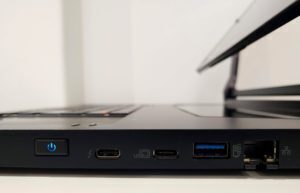 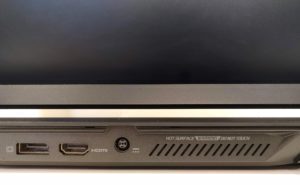 The Triton 900 is hella thicc, which means it has plenty of room for ports. The left side of the laptop has a USB 3.1 port, separate headphone and microphone jacks, and an odd USB 2.0 port that swivels out and has a very large cover that fits into the side panel. Apparently, this one is used for an Xbox Wireless Adapter (though newer Xbox One controllers can connect via Bluetooth).

On the other side, you’ll find Thunderbolt 3, USB 3.1 and an Ethernet port. There are more ports on the back — a DisplayPort, HDMI and the power jack. Just so you know, the Triton 900 comes with a certifiably immense power brick that almost matches the machine in weight. This makes the Triton 900 far less travel-friendly than you might expect.

Push it, push it real good

What’s a gaming machine test without some proper gaming-benchmarks? To really stress test the Triton, we ran the Metro: Exodus built-in benchmark tool 15 times in a row on the RTX preset. Just so you know, this is one of the most demanding games to run on a machine — so we felt it was pretty applicable. The test simulated roughly half an hour of gaming. Across the first 10 runs, the game ran at an average of 60.8 fps. The first two runs were just over 61 fps, and several of the runs were around 60.5 fps. By the 11th try, the benchmark started to struggle. But still a great run in our books.

The 17.3in 4K G-Sync display mounted on the Triton 900 is mammoth. One thing we would’ve reduced are the large bezels around the screen — but perhaps they’re there to increase the hardiness. The bezels definitely make the screen feel less immersive than it could. But it’s also bright and vivid. The colours are bold and bright, however, the screen is super reflective. Hopefully, your gaming room has dark curtains. Planning to play on a park bench? Forgetaboutit.

The display covers 167% of the sRGB colour gamut, which beats the premium gaming average of 146%. It is also one of the brightest displays we’ve seen on a gaming machine and measures in at 324 nits.

Okay, it’s powerful, it’s got a brilliant display, and an oddly-fun-to-play-with swivelling mechanism. What’s wrong with it? Well, this is not a laptop in the convention of the word — it should rather be called a desktop replacement. You can’t take this dude anywhere without the bulky 330W power supply… because the battery life isn’t great. Off-power, the Triton 900 lasted us just under two hours on our battery test. Which includes intensive browsing, streaming and the occasional game.

Speaking of streaming. We had the very unfortunate struggle of not having access to Netflix on the test unit. Or so we thought. No streaming website/app would give us access, citing a network problem. After myriad Googling and settings changes, we found a pre-installed network optimiser (for gaming) called ‘Killer Networking’. This darned thing blocked any and all streaming platforms.

The Triton 900 is pretty littered with bloatware that you’ll spend some time uninstalling. The only useful thing we found is called Acer PredatorSense, which lets you see how your system is performing, set overclocking settings, and change macros and RGB colours on the keyboard and fan. Yeah, we are RGB customisers and proud of it, m’kay?

From a design perspective, we could kinda imagine the Triton 900 being ‘interesting’ or ‘cool’. From a user perspective? It’s unusual and, frankly, not very useful at all. We very rarely used the swivelling display on the machine and would have preferred a more comfortable keyboard/trackpad layout and thinner bezels in exchange. 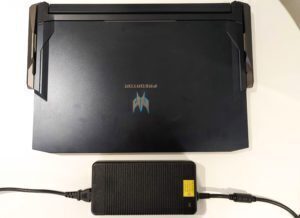 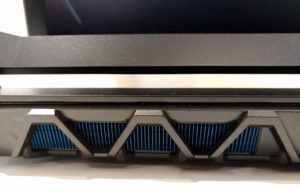 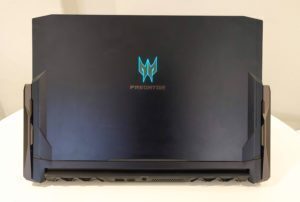 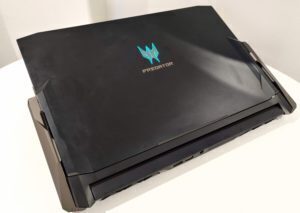 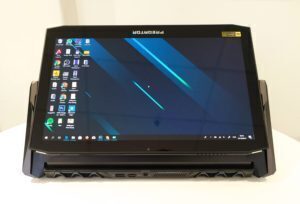 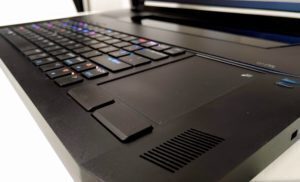 There is some use for the gimmicky bits if you need a machine that can do both creative work and gaming with its top-of-the-line laptop specs. But there’s a price to be paid for those specs and a funky design. A big price. The Triton 900 will currently cost you around R85,000 for the base edition. If you want to spend even more on a crazy gaming machine from the same company, check out the Thronos gaming setup, that’ll set you back R250,000.

That said, this thing is powerful. It’s only sold in entirely pimped out configurations and will play anything you throw at it. It’s a weird, fun machine that everyone loves to see, feel and play with. But we reckon the shine will wear off quickly.

Just as you think you know what gaming laptops look like, Acer goes and flips the standard design on its head with its new Predator Triton 900 gaming laptop.