We are entering an age of subscriptions replacing ownership of… most things. Including cars. And now Google is also on the bandwagon with a new feature called Play Pass being tested for its Google Play Store.

Android Police published a report that Google will soon be in the subscription business. In this particular area, we mean. You can already throw the search giant monthly money for Google Music and YouTube Premium. The new monthly subscription service, Play Pass, will give subscribers access to a bouquet of premium Android apps and games. ‘Premium’ in this case meaning apps that normally cost money, feature in-app payments and/or adverts (for those who don’t wanna pay).

The Netflix of… apps?

This monthly Play Pass will cost you $5 (around R72 at the moment). Whether it’ll be real value for money remains to be seen, as the value of apps offered would need to at least match R72. And having the subscription wouldn’t necessarily mean that every subscriber is interested in all the offered apps. 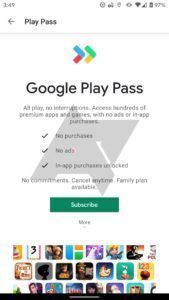 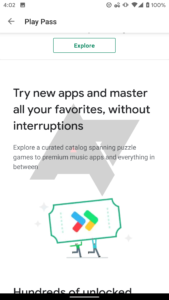 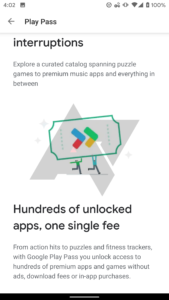 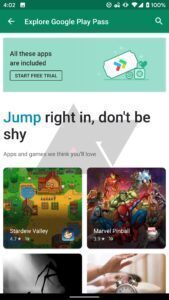 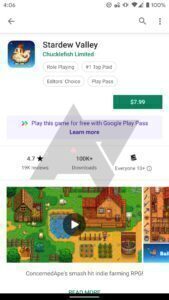 Android Police received screenshots from a reader, which appears to confirm the feature is currently being tested with selected users. From the screenshots, it’s evident that the premium pass catalogue will include puzzle games, music and fitness apps. More detail will have to wait till we see something official from Google.

Android users don’t spend as much money on apps as Apple users do, so this subscription pass may be hard to sell to users. We know Android folk prefer free apps. But as we said, the draw of Play Pass depends on the actual value offered and a user’s interest in the offered apps. It looks like the service offers a 10-day free trial, which could be useful to test out whether you’re willing to add yet another recurring payment to your credit card.

We don’t know when (or even if) Play Pass will roll out, or whether it’ll be available in South Africa. But, we will keep our ears to the ground for y’all.