Smartphones nowadays are more powerful than the computer that sent Apollo 11 to the moon. But then, so are most smartwatches. Now imagine taking a high-spec gaming PC and condensing it into the chassis of a smartphone? Asus has gone and done… more or less that, creating something worthy of powering a rocket with its new ROG Phone II.

The new Asus ROG Phone II is powered by Qualcomm’s latest Snapdragon 855+ and Adreno 640 graphics. The device packs 12GB of LPDDR4X RAM, a 6.59in AMOLED display with a 120Hz refresh rate, an under-display fingerprint sensor, 6,000mAh battery and either 128GB or 512GB of built-in UFS 3.0 storage. We’re not sure about you, but to us most of those specs wouldn’t look out of place in a full-sized PC.

It also features a 24MP camera sensor up front, while the rear has two sensors: the main sensor capable of 48MP shots and a 13MP ultra-wide lens with a 125° field of view.

And as if it couldn’t get any more ludicrous, the ROG Phone II sports two USB-C ports. One on the bottom of the phone for pumping it full of power, and there’s a proprietary port on the side for attaching accessories. Speaking of ports — it’s got a standard 3.5mm headphone jack on the bottom. Audiophile gamers rejoice! 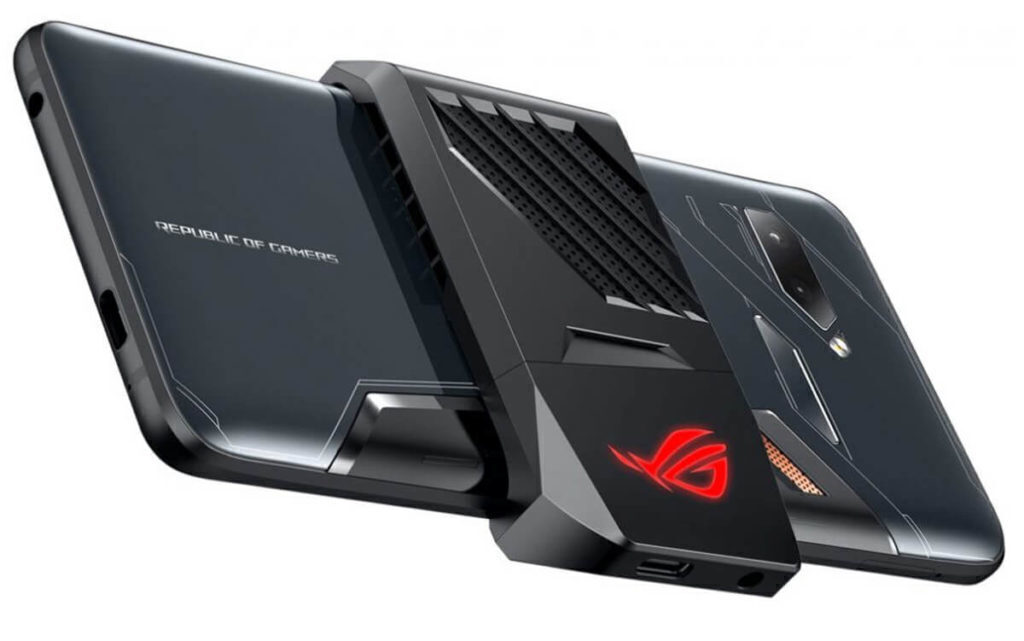 Asus’ second proprietary port on the side is for docking a wide array of (obviously) ROG accessories. Things like the AeroActive Cooler II clip-on fan, the skeletal Aero Case — which leaves the phone’s glowing logo exposed — and the ROG Kunai Gamepad can be attached.

The ROG Kunai Gamepad is the newest addition to the lineup and gives us a Nintendo Switch kinda vibe. This allows you to dock the phone, cast to a TV and use two controllers via Bluetooth, USB and a 2.4GHz RF connection. These controllers can also be connected to the phone using a bumper. And you can also mount the whole setup onto the new TwinView Dock II. Which seems a little… extreme. There’s no kill like overkill, but you’ll have to be seriously into your mobile gaming to invest in all of the company’s ROG Phone II kit.

Asus is obviously betting on some serious mobile gaming uptake in the future. And it’s probably got that right, based on how extensive the battle royale roster for mobile is getting. Doesn’t matter how hard the PC Master Race push against it, mobile gaming is real and it’s here to stay. We just don’t know if it requires external, clip-on cooling. Yet.