Surprise, surprise. The forthcoming Samsung Note 10 has leaked about a month before the big reveal, and it looks… familiar. In fact, with its triple camera setup arranged in a strip on one side of the rear and its unicorn-like colour scheme, it looks just like Huawei’s P30 Pro.

Renders of the supposed Galaxy Note 10 leaked via MySmartPrice and WinFuture, who says that they’ve obtained official press images. If these turn out to be the real McCoy, it’s obvious Samsung is nearing its evolution to an all-display device. This thing’s got little to no bezels and should have bezel-haters swooning.

Given Samsung’s spotty record at keeping its devices concealed up to launch time, it’s no wonder we’re seeing leaks already. But let’s take a closer look at what the leaked images tell us.

There’s a punch hole front-facing sensor like Samsung introduced with its Galaxy S10 range but in the middle this time around, and its a single camera rather than the double setup found on the front of the S10+. We like the symmetrical look upfront. We’re less enamoured with the asymmetry on the rear, though. It just looks too familiar for comfort… 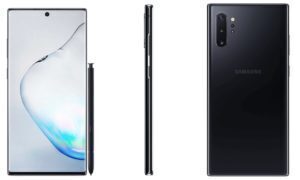 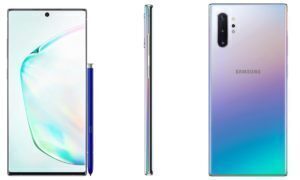 The back of the Note 10 doesn’t just look very similar to the Huawei P30 Pro with three camera sensors sitting snugly on the left, it also appears to include something that may be a time of flight (ToF) depth sensor, which is another Huawei feature. Imitation and flattery and all that. The colour choice looks like a good-looking mashup of the S10’s ‘unicorn’ pearl shimmer and, you guessed it, Huawei’s iridescent glass backs on its recent handsets.

Though we can’t see it on the images above, we’re sure there’ll be an in-display fingerprint sensor like we saw on the S10-range, and of course it wouldn’t be a Note without the trusty stylus. The S-Pen may be less flamboyant this time around (last time you could get it in yell) — you’ll either get blue or black according to the leaked images. It might feature some more interesting tech inside though… Check out our Galaxy Note 10 rumour roundup here. Or alternatively, wait for the official announcement on 7 August and be surprised.